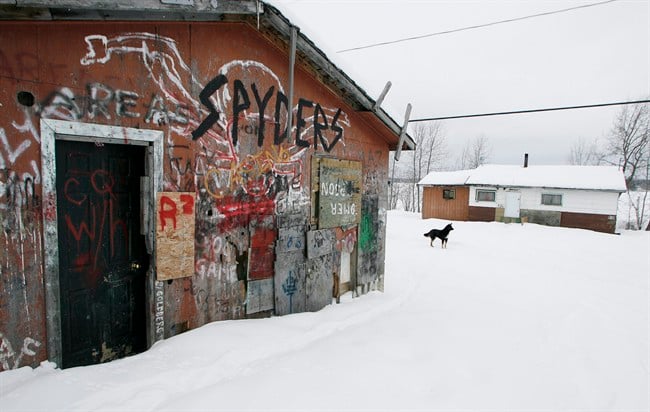 An abandoned house is shown on the Pikangikum First Nation on Friday, January 5, 2007. THE CANADIAN PRESS/John Woods

OTTAWA – Authorities involved in dealing with mental health in remote First Nations reserves say they have a plan to disrupt the cycle of suicide and crisis.

The federal and Ontario ministers of health as well as an umbrella organization representing 49 First Nations in northern Ontario have signed a charter that will give front-line workers and First Nations communities more of a say — and responsibility — in responding to crises.

The arrangement — signed by federal Health Minister Jane Philpott, Ontario Health Minister Eric Hoskins and Nishnawbe Aski Nation (NAN) Grand Chief Alvin Fiddler — is supposed to lead to a transition where First Nations can develop and implement their own health plans and avoid getting caught in government red tape.

The charter comes with a tracking mechanism that is meant to monitor results. And it will eventually include a more comprehensive strategy to prevent suicide and mental health crises to begin with.

OPINION: The Liberals’ plans for Indigenous reconciliation are just beads and trinkets

“There are many steps to get there but we have agreed today that … is our goal and the charter that we just signed established the principles upon which that work will be done,” Philpott said at a news conference held in Ottawa.

The agreement can also be seen as an acknowledgment by all parties that the “colonial health system” established for First Nations across Canada does not serve communities well, Hoskins said, noting poor outcomes and inequities.

For their part, First Nations communities are ready to take over control, Fiddler said.

“The document we signed … outlines the principles that will help … guide us to where we want to go,” he said. “It is time that this happens especially … what we’ve been through over the last year.”

Several remote communities, including the Wapekeka and Pikangikum first nations, have been reeling following the suicides of a number of young people recently.

Transforming the Indigenous health care system has been a long-term goal for many a First Nation organization fed up with frequent emergencies.

In October 2016, NAN, the Manitoba Keewatinowi Okimakanak (MKO) — an organization representing communities in northern Manitoba — and the Saskatchewan-based Federation of Sovereign Indigenous Nations proposed a joint plan for changing care across their territories to Philpott and Indigenous Affairs Minister Carolyn Bennett.

Doctors are pushing for similar changes.

“While government bureaucracies maintain funding and health system design, First Nations are left with the blame for health system failure,” the letter said.

“They are also left with the results of health system failure: more suicides, more disease morbidity and more broken families and communities.”

Part of the overhaul required involves giving more resources and responsibilities to First Nations themselves, the doctors argue, because the bureaucracy does not have the proper tools to implement prevention and treatment plans.

“Short-term crisis response intervention cannot be the backbone of any health system,” their letter said.

“This is what we have accepted in the current government health system design … we ask that you invest in community-led health transformation.”

In the immediate term, Ontario has decided to 20 new full-time mental health workers to Pikangikum — a remote community located near the Manitoba border that has long struggled with a suicide crisis including, most recently, the deaths of four young people.

Hoskins said the workers will go to the reserve immediately — at a cost of about $1.6 million — and will remain as long as needed.

He said he also believes changing the current approach involves giving more control to First Nations in Ontario to direct and manage care, pointing to a successful model used in B.C.

In 2013, the First Nations Health Authority in that province assumed programs, services, and responsibilities formerly handled by Health Canada’s First Nations Inuit Health Branch — an approach considered the first of its kind in Canada.