The WE Charity founders were testy and frustrated, blaming their troubles on politics and Ottawa: 'The government hid behind a children's charity' 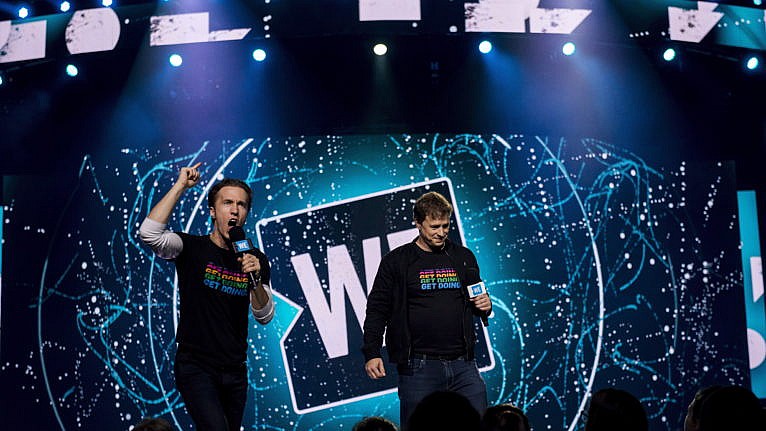 Craig and Marc Kielburger at their WE Day event in Toronto on Sept. 20, 2018 (CP/Christopher Katsarov)

Craig and Marc Kielburger testified before the House of Commons ethics committee on Monday for the second time on the matter of the now-defunct $912-million summer student grant program their WE Charity had been tapped to administer in the summer of 2020. The brothers arrived with their lawyer in tow—and on screen—and their hands balled into rhetorical fists, telling the members of the committee, “Today we are taking a stand.”

Their comments were testy, frustrated, even grief-stricken about what the controversy surrounding the grant program had cost them, their organization and the work it does.

Here are five things we learned from their appearance:

1. How do you make a not-heart symbol with your hands on a hypothetical billboard? Whatever it is, that’s how they feel toward the government right now.

The controversy around WE being tapped to administer the grant program is rooted in the opposition contention that the organization was overly chummy with Prime Minister Justin Trudeau, former finance minister Bill Morneau and their families. Trudeau and Morneau have both since conceded that they should have stepped back from any decisions involving WE given their connections to the organization.

But based on Monday’s testimony, there’s little love lost between the WE founders and Liberal politicians now. WE was simply offering to help, as charities do, Marc Kielburger said, but they are innocent bystanders in the political storm that followed.

“We didn’t advise the Prime Minister and Mr. Morneau not to recuse themselves. We never prorogued Parliament. We’re not involved in the decision to filibuster the committee this fall,” he said. “This is a political scandal for the government, not WE Charity. The government hid behind a children’s charity by letting it take the fall for their political decisions.”

2. They would like the committee members to know they destroyed a children’s charity.

In September, WE Charity announced it was shutting down its Canadian operations and the Kielburger brothers would step down from their leadership roles, blaming the “fallout” from the Canadian Student Service Grant. Before the committee, Marc Kielburger said his charity had been “destroyed by political crossfire,” and he listed off the many good works his organization had put out into the world that would now be wiped out.

“Many good people are delivering these projects,” he said. “They do not deserve to be political pawns.”

In addition, committee members had been building up the “false narrative” that the brothers had been reluctant to testify, he said.

“If this was about us as individuals, we would have come here right away, to refute some of the very personal attacks on our integrity. But it’s not that simple,” he said. “This charity is more important than us and the charity’s work must be carefully protected. You see, even as WE Charity winds down its Canadian activities because of politics, it continues to operate life-saving humanitarian programs.” Kielburger delivered that single word—”politics”—the way you might pronounce the most toe-curling swear word you could dream up.

3. The super-sized nature of the program was the government’s doing and not WE’s.

Conservative MP Jacques Gourde questioned the brothers about how the program evolved, clarifying a few times the initial size of the program that ultimately promised grants of up to $5,000 for 100,000 student volunteers.

Craig Kielburger said the government originally asked his organization to design a program for 20,000 students, and for that, WE offered an initial price tag of $50 million.

“Over the time, they increased the numbers so exponentially, it grew to $543 million and 100,000 [students], but they contacted us originally for 20,000 [students],” he said.
He emphasized that the ballooning size of the program was driven by Employment and Social Services Canada. “It kept on changing at the request of the ESDC, and it kept on getting bigger and bigger and bigger at the request of the government,” he said. “This was not being requested by us, it was requested by ESDC.”

4. They couldn’t register as lobbyists because they are volunteers.

At one point, NDP MP Charlie Angus asked the pair whether the lobbying commissioner had been in contact. Craig Kielburger did not answer directly, but said they had completed all paperwork “out of an abundance of caution.”

The brothers had said a number of times that the government approached them about the program rather than the other way around, but that’s not true, Angus said, reading from an email Craig Kielburger had sent to Morneau and listing off other ministers they had met with. Angus asked whether they wouldn’t have saved themselves a lot of grief if they had registered as lobbyists at the outset.

Craig Kielburger responded that volunteers are not required to register as lobbyists. Angus was having none of it.

“The fact that you’re a volunteer—come on, Craig—we’re no dummies here. You guys run this organization,” he said. “You’re a volunteer that has a chief of staff who’s paid for by the charity, that’s ridiculous.”

The WE co-founder did not quite respond to the substance of what Angus was arguing when he replied.

5. They and their families have faced threats.

Liberal MP Han Dong asked if the Kielburgers or their staff had been subjected to any threats as a result of their involvement in this controversy. Craig Kielburger answered emphatically that “It has been terrible,” with death threats coming into their office.

“And on a personal note, my youngest isn’t even one year old and he’s already received death threats directed to him,” he said, adding that their home addresses had been printed in news outlets and they’d had to call the police multiple times. “My three-and-a-half-year-old can’t play outside anymore.”

The day they announced the charity was closing its Canadian operations, “when certain members of Parliament got on their social media accounts to inflame people,” someone showed up at his house to confront his wife, Craig Kielburger said.

“This has been,” he paused, grasping for the right phrase. “Beyond words.”