Five non-partisan reasons Elizabeth May belongs in all the debates

From diversity to on-site fact-checking, here are five reasons why the Green Party's Elizabeth May deserves a spot at future debate podiums 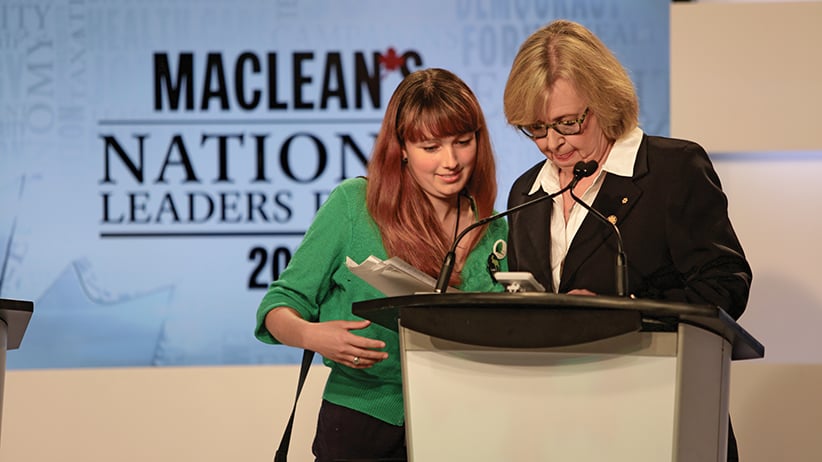 The federal leader who walked away from last Thursday’s Maclean’s National Leaders Debate having wowed the audience was Elizabeth May, whose articulate, data-rich and civil performance inspired a storm of accolades on Twitter. That the Green party leader has been excluded from some future debates has itself become the topic of debate, with some calling her a “talented distraction” who doesn’t belong, to others calling for her inclusion.

Related: Could May play spoiler in B.C.?

Putting partisan politics aside, here are five reasons why May deserves a place at future debate podiums:

1. She brings welcome diversity. The fact that a white woman brings a bracing shot of diversity to the current leadership race speaks volumes. But, as countless studies show, ethnic and gender diversity sparks a climate of creativity and innovation—and even makes us “smarter.” May’s which-of-these-are-not-like-the-others cameo accomplished that in spades last week.

2. Her focus on issues highlights political blustering. While the other leaders were busy trying to counteract the partisan stereotypes they’ve been saddled with, May stuck to the topics under discussion, never deflecting the conversation to get in practised talking points or partisan jabs. She also kept it civil, a reminder that it is possible to accomplish that, even while being repeatedly spoken over and interrupted by the others.

3. She sets a candour baseline. The fact May has no shot at the PMO gives her the freedom to tell it as it is. We saw that in the Maclean’s debate when she admitted that dealing with the Senate meant opening a can of worms, something none of the other leaders would dare say: “We need to deal with the Senate,” she said. “It’s not my top priority, because it’s hard. It’s going to require opening up the Constitution. We think we should amend the amending formula, so that Canadians can change our Constitution by referendum instead of the antiquated formula we’re saddled with today.”

4. On-site fact-checking on the environment file. No one can call BS or challenge her colleagues’ performance with more authority than May, a crucial skill, given the fact that climate change, greenhouse gas emissions targets, the state of the oil sands and pipeline construction/approvals are hot-button election issues. One example last Thursday: May’s relentless, ultimately unsuccessful, attempt to get Thomas Mulcair to nail down his position on Kinder Morgan.

5. She serves as an active reminder of federal female political representation. Though not the leader of an official federal party (the Greens need 10 more seats for that), May is the first female leader of a political party elected to the House of Commons since former NDP leader Alexa McDonough won a seat in 1997. She’s a reminder that women can lead political parties and parry and thrust with the best of them in the House of Commons. The 3:1 male-to-female debate ratio also reflects the sad state of female representation at the federal level. Recruitment of female candidates has already become an election issue, with the NDP in the lead.