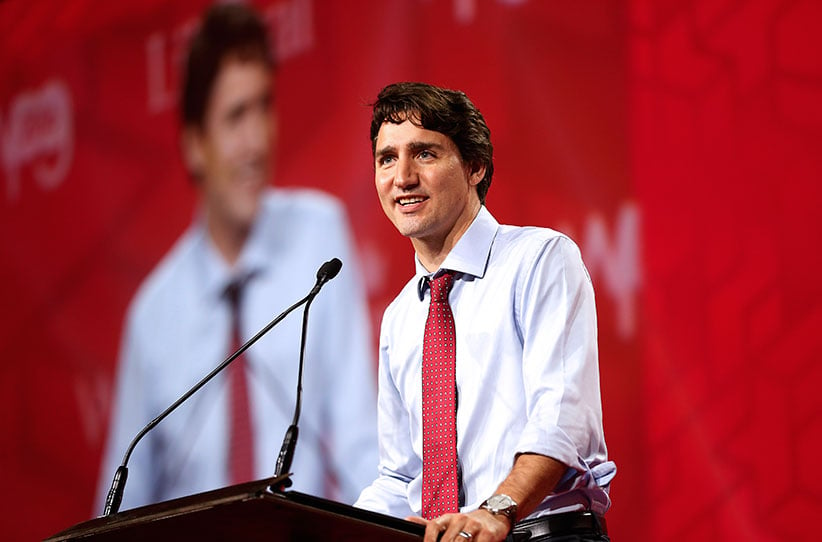 Justin Trudeau bounded onto stage in the main hall at Winnipeg’s RBC Convention Centre this afternoon—jacketless, as is his custom, shirt sleeves rolled up—to run through a series of key themes to this weekend’s Liberal convention.

1. Recalling the 2015 campaign is still the best way to get Liberals cheering. Trudeau cast back to his visit to Winnipeg a few days before the Oct. 19 election, not shying from mentioning his own knack with crowds:

“Close to 3,000 people had come out on a lovely fall evening, with their kids, with their friends, just to be part of the moment. We knew they all wouldn’t fit in the building. So did they. So I got out of the car and walked the line to shake everyone’s hand. To thank them for coming. To thank them for being part of our campaign. To ask for their support. For me, that’s what our campaign was all about.”

2. Among the policy moves his government has already done or put in motion, Trudeau highlighted the revamping of a raft of federal benefits for parents that are being streamlined into a single, tax-free payment, arguably the most substantial measure taken so far by his Liberal government:

Bonus read: Find out how much the Canada Child Benefit will help your family

3. On the day before Trudeau’s speech, the biggest event at the convention was an address delivered by his chief of staff, Katie Telford. In it, she told a story about Gerald Butts, Trudeau’s principal secretary, writing “people, people, people” on the Liberal election headquarters whiteboards last fall, as a reminder of what’s behind modern electioneering data. Trudeau echoed that anecdote:

Bonus read: Katie Telford on what the Liberal campaign was really all about

4. Winnipeg is often seen as Canada’s unofficial urban Aboriginal capital, and First Nations issues have been highlighted here by the Liberals. Trudeau hit that theme, but appeared to caution against expectations of swift solutions:

“No relationship is more important to me and to Canada than the one with First Nations, the Metis Nation, and Inuit peoples. That’s why we have taken real, positive steps to ensure that Indigenous peoples have the opportunities that other Canadians have enjoyed for centuries. We know these changes won’t happen overnight, or even over the course of a single mandate.  But we’re not letting that stand in our way. Instead, we’re investing $3.6 billion in First Nations education, and more than a billion dollars in essential social infrastructure, like accessible housing and child care on reserves.”

Bonus reading: Can the Liberals keep their promise to First Nations youth?

5. Most Canadians don’t care much about party rules and regulations, but this is a gathering of hard-core Liberals. So among the key debting points here is a push by Trudeau’s team to completely overhaul the party’s constitution. Opponents complain it amounts to a centralizing power-grab. He pushed back:

“[The] constitution we have today is a product of the era we worked so hard, together, to put behind us—the era of factional battles and hyphenated Liberals, of regional chieftans and behind the scenes power-brokers, of the closed, insular thinking that almost killed this party. That is the constitution we need to replace…This new constitution is about closing the distance between the leader and every single contributor to this movement we’ve built. Hundreds of thousands of Canadians joined us in the past few years. They created a movement…This new constitution is written to build the next steps in our movement. A modern, responsive, wide-open organization that anyone can join and shape and work to build.”

Bonus reading: 10 challenges for the Liberals in 2016