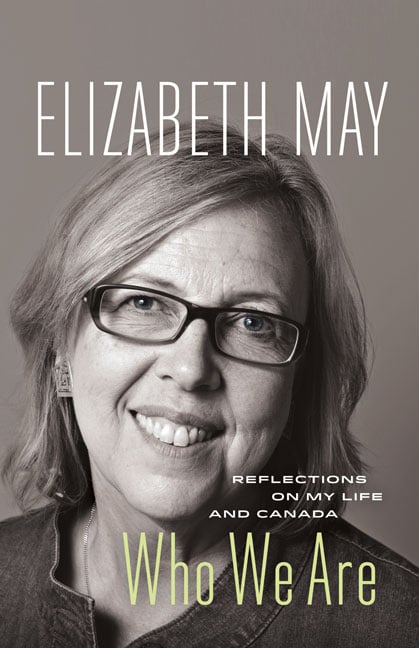 Elizabeth May’s eighth book is a crash course in the Green Party leader’s long and winding road from an American private school education to a seat beside the translation booth at the back of the House of Commons. May’s publisher, Greystone Books, appropriately dubs Who We Are: Reflections on My Life and Canada a “marriage of memoir and manifesto.” The environmentalist, who was born in Connecticut but came of age in Nova Scotia, weaves her own life’s experience into a vision for her adopted country and the planet. At most a year out from a federal election, Who We Are is undoubtedly timely. May says she never intended to write an autobiography, and that the personal details were simply part of the book deal. That compromise allowed her to espouse the kinds of policy she’s advocated most of her adult life—and which, starting yesterday, she hopes Canadians embrace.

May sat down with Maclean’s in Ottawa to talk about Who We Are. The book teaches its readers a few things about the Green leader, a few more things about Canada’s place in the world, and yet more things about who’s helping and who’s hurting the fight against climate change. Here are five claims that stand out.

1. Bill Clinton is a lifelong friend.

“Of course, when I met him, he was a Yale law student.”

2. No MP spends more time in the House of Commons.

“It wasn’t that long ago that the Canadian Parliament functioned without the toxic levels of hyper-partisanship we see today.”

… and May knows more about Canada’s record than some negotiators.

“It’s weird to me that Stephen Harper is less progressive on climate than … large, multinational oil companies.”

“As we export to other countries, there will be essentially a carbon tax attached to things that come from Canada.”