For Ontario's Conservatives, another fine mess

Paul Wells: The night ends with a Doug Ford win—ha-ha, nervous laugh. If there's a lesson it's that Ontario conservatism is a complex coalition. 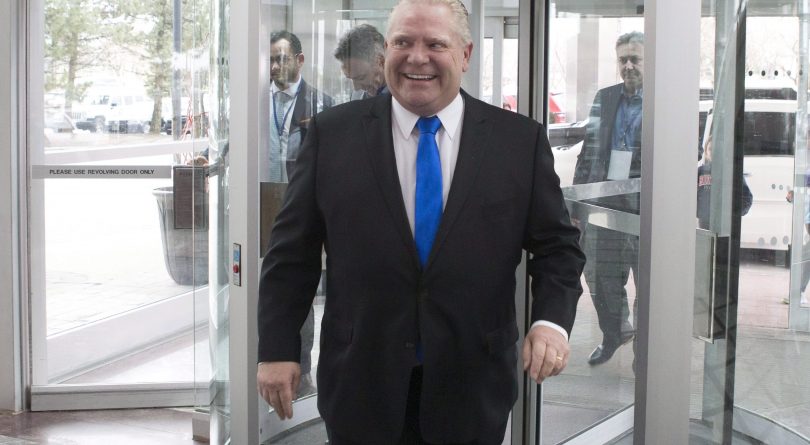 If elected party caucuses still chose party leaders in this country, Vic Fedeli, an unassuming gent from North Bay, would be in his second month as the leader of Ontario’s Progressive Conservatives, cruising toward near-certain victory against Kathleen Wynne’s incumbent Liberals.

But no. This party needs to do things the hard way.

And so it came to pass that on Saturday night, Hartley Lefton—the amiable Toronto lawyer who helped organize the leadership race amid the chaos after Patrick Brown vacated the post, one step ahead of villagers with torches—had to kick a few hundred Tories out of a conference hall in deepest Markham. Four hours after the results of the party’s leadership race were supposed to have been announced. Without being able to announce any results. Because one candidate was contesting the results.

Rumours—which were all the party gave anyone to go on—had it that the disgruntled candidate was Christine Elliott, the consensus candidate of the party establishment. The other big rumour was that Elliott’s mood could be explained by the apparent victory of Doug Ford.

Yes, that Doug Ford. The brother of the other.

But the hell of it is, maybe it’s not a disaster.

Let us proceed here on the assumption, widely repeated during the afternoon-long wait for—well, for nothing, thanks for coming out—that Ford is indeed the winner. The Toronto city councillor, former effective co-mayor to his late brother Rob Ford, than whom Doug was relatively more urbane, more in control of any personal demons, and less goofily charming, had almost no support in the elected PC caucus, nor did he have much more among the party’s nominated candidates in seats currently held by Liberals or New Democrats. At his worst he’s a lout. At his best he’s barely palatable to wide swaths of the party. His brother’s tenure as mayor was chaotic. Doug Ford lost the election to replace his brother as mayor. Polls suggest he’s deeply unpopular among the swing voters who decide whether the next premier is Liberal or Conservative.

But maybe he wins anyway. Far be it from me to guess the outcome of the general election campaign about to begin. I was certain Ford would lose this leadership race, and I was wrong. Maybe. We still don’t know, ha-ha, nervous laugh. But the polls suggest Conservative dominance over the Liberals has not been shaken by Patrick Brown’s chaotic and scandal-ridden resignation, nor by his astonishing return to run as a candidate to replace himself, nor by his second departure, nor by any of the other twists and turns in this historically ridiculous process.

Liberals need to think long and hard about how Kathleen Wynne came to be so desperately unpopular that the Conservatives could run a rusty engine block and an old 8-track tape of the Charlie Daniels Band against her and still have a near-lock on victory. Probably they should do some of that thinking before Ontarians vote on June 7.

It is hard to explain the end of a complex story when one hasn’t yet—ha-ha, nervous laugh—been told what the end is. But if it’s Ford in first and, as yet another of the evening’s (disputed) rumours has it, the elegant Harvard-educated lawyer Caroline Mulroney in fourth, it suggests the race’s candidates of conviction had a better night than the other two.

I was going to call those two the “candidates of compromise,” but that’s not entirely fair. One presumes Elliott and Mulroney have as much love in their hearts for Ontario as Ford and the impressive upstart social conservative Tanya Granic Allen do. I don’t even know how you measure such things.

But there is in Ford and Granic Allen a little bit of what Stephen Harper had, and frankly a bit of what Elliott’s late husband Jim Flaherty had when he was in provincial politics: the unnerving sense that they believe things, and they don’t much feel like bartering those beliefs away for magic beans. It was Elliott and Mulroney, after all, who tailored their position on carbon taxes to match Ford’s. He didn’t tailor his positions on anything to what someone else was doing. Most of the time it’s not clear he knew what they were doing. It doesn’t seem to have hurt him.

As for Granic Allen, I was surprised by how many people at Saturday’s event wanted to remind me that in last year’s federal Conservative leadership race, the two social-conservative candidates, Brad Trost and Pierre Lemieux, won 20 per cent of first-round support in Ontario between them. That suggests there are a lot of Christian conservatives in Ontario. Which shouldn’t come as a surprise. Granic Allen showed herself an effective advocate for their views.

Before the theme of the evening became chaos, the theme of the afternoon was unity. Vic Fedeli preached it, as did the day’s guest keynote speaker, Jason Kenney, from the United Conservative Party of Alberta. Kenney even closed his excellent speech by demanding that everyone in the room declare themselves part of a united team. The greater perceived risk at that point was probably that Ford and his supporters would walk out on Elliott. The real risk, apparently, is that much of the rest of the party will now walk out on Ford.

The Red Tories I talked to don’t seem likely to do that. One joked about stacking sandbags around the Albany Club, the oak-panelled Toronto social club favoured by the Hugh Segal wing of Canadian high Toryism, and riding out the coming flood. But it was only a joke. The plan was still to run in the election, show up to Doug Ford’s events, and pretend to be enjoying it all. And then, for all anyone knows, to serve in his cabinet, because after all somebody will have to.

If we’ve learned anything from this grotesque season in Ontario politics, it’s that Ontario conservatism is a complex coalition. People guided by faith or tradition or elite privilege or working-class resentment or political philosophy or personality. People whose convictions are hard to reconcile, except when blended in the solvent of approaching power. The reckoning, if Doug Ford can’t win the June election, will be terrible. But it will wait until then,  just in case he does.