For the record: Justin Trudeau's rally speech in Brampton 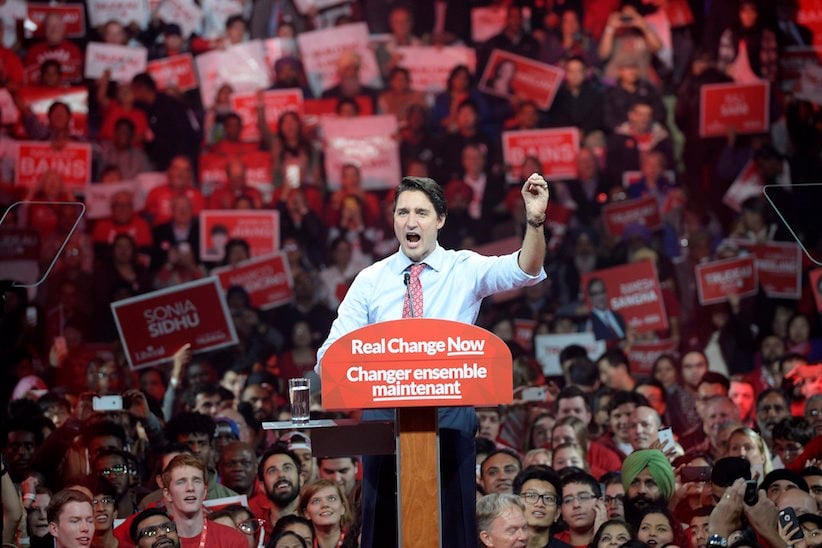 At least 5,000 gathered in an arena in Brampton, Ont.—one of Canada’s most diverse cities—to hear Liberal Leader Justin Trudeau speak to his vision of Canada. Below are his prepared notes from the speech. French is in italics.

Are you ready for change, my friends?

C’mon. Make sure Stephen Harper can hear you….

Are you ready to bring real change to Ottawa?

Because I’ll tell you something. This is an important election, my friends.

And I’m determined to win it.

What’s left to say about the Conservatives these days? After 10 long years in power, it’s like they’ve stopped trying.

This is Stephen Harper’s eighth election. He’s asking for a fourth term as Prime Minister.

It’s like a bad movie franchise: by the time you get to the third or fourth sequel, most of the stars are gone, and the plot is getting pretty thin.

This government is out of touch and out of ideas. And if we stay focused and work hard, in 2 short weeks they’ll be out of time.

Related: Justin Trudeau, ready or not

Now, I don’t know how many of you drove here today. But I bet you know what I mean when I say the traffic in the GTA is unbelievable.

It hurts our economy, robs us of time with our kids, and makes it harder to get our goods and services to market.

Frankly, gridlock in this city has never been worse and Stephen Harper doesn’t that.

See: I’ve had the chance over the past few months to spend some quality, up-close-and-personal time with Mr Harper.

We’ve had five debates in this election. Despite the Conservatives’ best efforts, I’m sure you’ve seen a few of them.

There have been some memorable moments.

But my favourite had to be in the debate on the economy in Calgary, when Harper said that he is making it easier for Canadians to get around our cities with his investments in infrastructure.

Really. He actually said that.

When you spend a decade in a motorcade, you don’t have to worry about traffic jams.

That’s what happens when you’ve been in power too long.

It’s time for a change in this country, my friends. A real change.

It’s time for a clear and honest plan that will meet our challenges head on.

It’s time to invest in transit and roads so we can create the jobs and growth this economy so badly needs.

It’s time to raise taxes on the wealthiest 1%, so we can cut them for the middle class.

It’s time to give middle class families more money to help raise their kids. And it’s time to lift 315,000 children out of poverty.

It’s time for an open and honest government that works hard every day to earn Canadians’ trust by putting its trust in Canadians.

It’s time, my friends, to close the book on the Harper Decade.

Having failed to help Canadians where it matters, what is Stephen Harper left with?

The politics of fear and division.

Franklin Roosevelt said we have nothing to fear but fear itself.

Well, Stephen Harper has nothing to offer but fear itself.

Fear of terrorism. Fear of the world beyond our borders. Fear of each other.

Well, let me tell you something.

Fear makes us weak, not strong.

The Prime Minister’s job is to bring Canadians together, not to tear us apart.

In 10 years, Stephen Harper has never missed an opportunity to divide Canadians.

He and his party have brought unprecedented nastiness to our country’s public life.

Their way of doing politics is mean and small and negative.

It doesn’t have to be that way, my friends.

Related: What Justin Trudeau gained by losing his cool

My friends, Canadians want a better government, not just a different one.

Politics is a rough business. It is not for the faint of heart or the thin of skin.

And we can disagree with our political adversaries. We should be strong and sharp and tough in the way we promote our policies and contrast them with those of our opponents.

I’m a fierce competitor. I believe in what we’re doing and I’ll fight hard for it.

But I want you to keep something in mind. Always.

In the end, we are all Canadians.

Conservatives are not our enemies. They’re our neighbours.

They want what’s best for their country, just like we do. They want safe communities and a growing economy. They want better jobs and more opportunities for their kids. They want their country to stand for something in the world, with the tenacity to solve big problems.

We don’t need to convince them to leave the Conservative Party. We just need to show how Stephen Harper’s Party has left them.

Harper wants Canadians to believe that their country is so weak that only thing standing between our safety and terrorism is him.

He wants us to think that if it weren’t for him, our economy would fall apart.

The Canadian economy doesn’t depend on him. It depends on you.

The Canadian economy depends on your work ethic. Your smarts. Your desire to build a better life for your kids and a better country for your fellow citizens.

It’s past time we had a Prime Minister who gets that. A government that knows that Canadians are the strength of the Canadian economy. One that gives Canadians the right tools and a real chance to create jobs and grow the economy.

There are many, many issues where Harper and I part ways. But none is greater than this:

His vision of Canada is small and meek and fearful.

My vision of Canada is open and confident and hopeful.

Harper wants Canadians to be afraid that there’s a terrorist hiding behind every leaf and rock. That there’s a sea of economic troubles lapping at our shores.

I don’t see things that way. I have confidence in Canada and in Canadians. We have won tougher fights, and solved greater problems in the past than we face today.

The country that fought like lions in the trenches of WW1 and on the beaches of WW2 is not as easily cowed as Stephen Harper thinks we are.

The people who built medicare and the Canada Pension Plan are not afraid of doing the hard work it will take to strengthen the middle class and lift Canadians out of poverty.

Related: Justin and Pierre—like father, like son. Only, not always.

And let me tell you this my friends, we are the one country in the world that is strong not in spite of our differences, but because of them.

That didn’t happen by accident and it won’t continue without leadership. Leadership that works hard every minute of every day to bring Canadians together.

And all this talk of fear begs the question: what is it that Stephen Harper is so afraid of?

With the many millions upon millions of dollars he’s spent on attack ads, lots of people ask if I think he’s afraid of me.

Stephen Harper isn’t afraid of me, my friends.

He’s afraid of you.

And he should be (afraid of you).

His worst nightmare is a confident and hopeful citizen who demands better for her country.

He wants you to believe that better isn’t possible. His job depends on it.

Well, we’ve got news for you, Mr Harper:

This is Canada. And in Canada, better is always possible.

This is a great country, my friends.

It needs a better government.

Three years ago this week, we started this journey together.

My hair was a little longer then. Sophie still prefers it that way.

My friends, we’ve been through a lot, together, since then. The polls have gone up and down. The pundits have lauded us and lamented us.

None of that matters. It never has. And it never will.

I’ll tell you what does matter.

We spent those years looking thousands and thousands of Canadians straight in the eye and asking simple questions:

What kind of country do you want to build?

What kind of Canada do you want to leave to your kids?

Do you want Stephen Harper’s unambitious vision of a small, fearful country? One where we are divided against one another and suspicious of the world.

Or do you want a confident, positive vision of Canada? One that is clear-eyed about the challenges we face, but optimistic that we have all that we need to meet them head on.

I believe in this country. I love it with all my heart. And I know you do too.

Never forget who we are fighting for. We are in this for the mom who lives in Brampton and works in Markham. She needs to get her kids to school on time every morning, and, hopefully, make it back home in time for their soccer game.

We are in it for the young man whose parents brought him to Mississauga from Lahore. Whose dreams for his future are so much larger than his parents had ever thought possible.

We are in it for seniors who worked hard their whole lives. Who helped their city and their country grow, and want nothing in return but a secure and dignified retirement.

In short, we are in this for everyday Canadians. People who give a lot and ask for little. Who want what’s best for their family and their community and their country.

Canadians who deserve a better government.

There are two weeks left. 14 days. Let’s make the most of every minute.

Harper’s Conservatives are going to do the only thing they know how to do. They’ll throw every nasty ad and every dirty trick in the book at us.

But I’ll tell you something.

Because of all your hope and hard work, we are on the verge of something special.

We have the chance to beat fear with hope.

We have the chance to beat cynicism with hard work.

We have the chance to prove that fear and division won’t work here. Not in Canada.

We have the chance to replace a vision of this country that’s small and mean and nasty with a vision that’s confident and optimistic and positive.

Most of all, we have the chance to take this country from Stephen Harper and give it back to Canadians.

And the whole world will be amazed at what we do with it.

A better Canada is possible my friends.

On October the 19th, let’s make it happen.

FILED UNDER: Federal election 2015 FOR THE RECORD Justin Trudeau