Why foreign policy is in the spotlight on the 2015 campaign 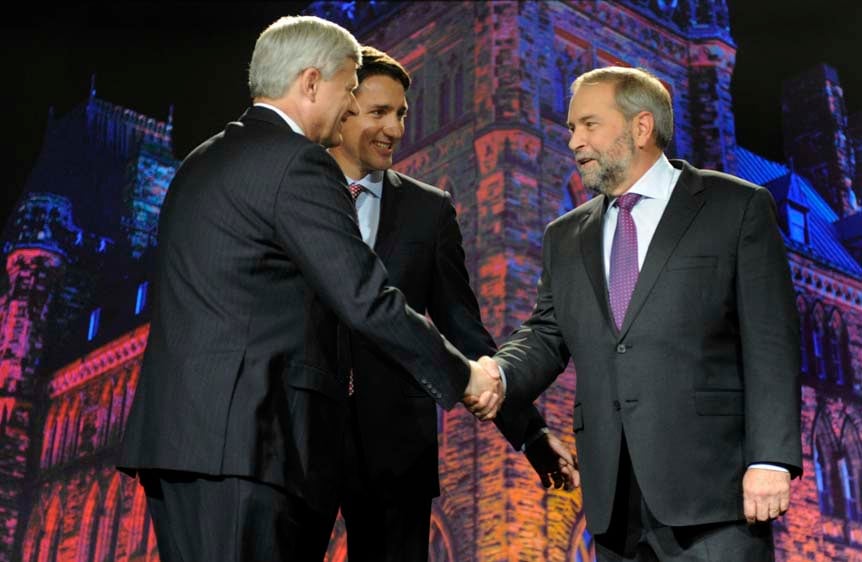 At first blush, tonight’s Munk Debate on foreign policy in Toronto looks like the most off-the-mark of the various clashes among the party leaders being staged during this election campaign. After all, none of Stephen Harper, Justin Trudeau and Tom Mulcair has put foreign policy anywhere near the centre of his pitch to voters.

Yet this debate has a stronger claim on our attention than the low profile of foreign issues on the campaign trail might suggest. For starters, the world has a way of intruding. Five years after Harper was elected in 2006, he told Maclean’s in an interview: “Since coming into office, the thing that’s probably struck me the most in terms of my previous expectations—I don’t even know what my expectations were—is not just how important foreign affairs/foreign relations is, but, in fact, that it’s become almost everything.”

Everything? That might be a stretch. Still, staking out clear positions on events abroad has proven crucial for Harper at key points during his Prime-Ministership. For instance, after the Mike Duffy affair made 2013 miserable for his Conservatives, Harper started the slow rebuilding of support, in early 2014, by speaking out forcefully against Vladimir Putin’s various predations against Russia’s neighbours, and world issues remained his strong suit for many months.

Harper scores with a wide swath of voters when he sounds vigilant and resolute on international challenges. Earlier in this campaign, his emphasis on careful screening of refugees for security reasons—rather than simply moving rapidly to let many more displaced Syrians come to Canada—proved more popular than his rivals could have anticipated.

So Mulcair and Trudeau should know better by now than to imagine that castigating Harper as a heartless hawk is effective politics. He’s apt to benefit from that line of attack. Counterintuitive criticisms might have more potential. On defence, for example, it shouldn’t be hard to portray his up-and-down spending record, combined with his government’s dubious performance on big procurements, as something less than staunch, competent rebuilding of the military.

On diplomacy, Harper’s uncritical support for Israel’s Benjamin Netanyahu has come at a cost, likely including Canada’s failure to win a UN Security Council seat in 2010. It will be interesting to see if either Mulcair or Trudeau takes aim at him on that sensitive topic. On foreign aid, there’s ample room for criticism of Canada’s level of overseas development spending, but, so far, neither the Liberals nor the NDP has promised increases large enough and soon enough to justify being too outspoken.

Almost any strong positioning on foreign files—whether defence, diplomacy or aid—must come with dollar figures attached to have much credibility. I’m reminded of how, back in 2003, after then-prime minister Jean Chrétien decided to sit out George W. Bush’s invasion of the Iraq, I interviewed a prominent academic who supported the war. He told me that Canadians who were proud of Chrétien’s stand were deluding themselves if they thought it meant their country was cleaving to a generous tradition of peacekeeping and delivering foreign aid. “You can’t be a multilateralist on the cheap,” he said. “You can’t sit there bleating about the legitimacy of the UN being jeopardized over Iraq, if your overseas-development-assistance numbers are as lousy as ours are.”

That was Michael Ignatieff talking. Say what you will about his later foray into Canadian politics, he had a point. Posturing about what Canada should be doing more of beyond its borders needs to be backed up by money. That goes for both hawks and doves.

The Munk Debate will likely feature a good deal of lofty language; discourse about Canada’s place in the world pretty much always elicits a bit of grandiosity. But as long as the leaders are pressed—by each other, one hopes—to be explicit about costs, as well as convictions, there’s a reasonable chance the whole affair can stay tethered to reality. If they don’t keep each other honest on the stage of Roy Thomson Hall tonight, we’ll have to do the job for them afterward.