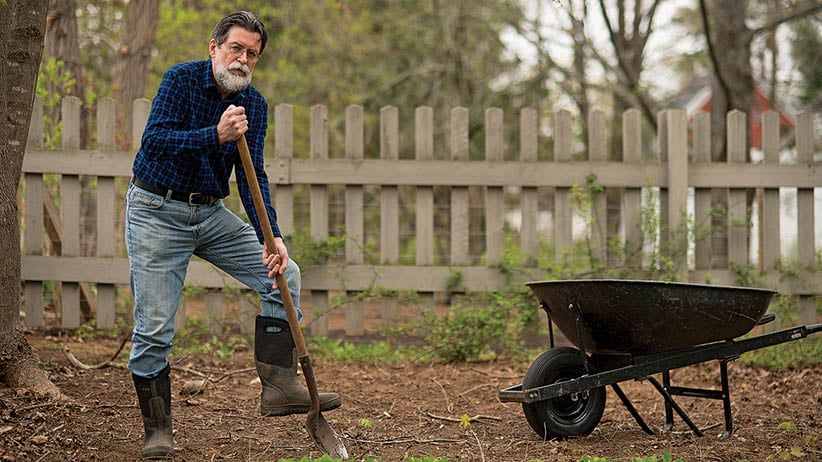 Tom Corbett at his home in Kingston, Nova Scotia. (Photograph by Scott Munn)

There was a time, some 20 years back, when Tom Corbett had much in common with Stephen Harper. Both entered the tumultuous 1990s with bedrock conservative values, a strong Christian faith, and a contempt for big government and rich taxpayer-backed political pensions. Corbett was executive director of Ontarians for Responsible Government, a project of the National Citizens Coalition (NCC). He would later join the Reform party as a staff member in Ottawa after a meeting with Harper, then an ambitious young member of Parliament for the fledgling party. Among the NCC’s priorities were dispatching Ontario’s NDP premier Bob Rae from office, and a vocal campaign against “gold-plated” political pensions. Harper, like most of his fellow Reform MPs, was also a critic of fat parliamentary pensions, and they gained much political mileage from their refusal to sign onto the plan. Harper quit the Reform party in 1997 to lead the arch-conservative NCC, ramping up the lobby group’s campaign for political pension reform until his return to federal politics in 2002. It was a principled stand that Corbett admired, but much has changed in the intervening years.

Harper­—despite substantial reductions in MP pension entitlements that his party introduced in 2012—is eligible for an annual pension of $191,000, indexed to inflation, were he to retire in 2016 after 10 years as Prime Minister, says Jeff Bowes, research director for the Canadian Taxpayers Federation. In Corbett’s view, that makes Harper one of the political “pension pigs” the two men used to campaign against, both on Parliament Hill and in a hard-hitting media campaign sponsored in the mid-1990s by the NCC.

Since those days, Corbett has developed a more jaundiced view of official Ottawa. He considers Harper’s pension reforms mere tinkering—the average pension for former MPs stands at $59,307, the Treasury Board reports. “They call it the Ottawa bubble,” he says in an interview from his home in Kingston, N.S. “These guys don’t know what it’s like to live like the people who are paying their salaries.”

By contrast, 65-year-old Corbett, Harper’s former comrade-in-arms, scrapes by on combined Canadian Pension Plan (CPP) and Old Age Security (OAS) payments of about $1,000 a month, making substantially less in a year than Harper would clear in a month. It’s an extreme example of the income disparity that many retirees will face—those with the workplace pensions, versus some of the more than 60 per cent of working Canadians without. With only a quarter of tax filers contributing to retirement savings plans (RSPs), many are facing lean retirement years. Pensions—and the haves and have-nots—are a hot-button issue across the country, and nowhere more than in Ontario with an election under way and Premier Kathleen Wynne promising a mandatory workplace pension plan for most Ontarians without one.

Although Corbett has worked all his adult life, he never had a workplace pension. “For me, a job was always for something that I believe in,” he says. “The National Citizens Coalition paid good money and the Reform party paid me decent money, but those are the best-paying jobs I had. I actually worked for a lot of non-profit organizations; that certainly kept my income down quite a bit.” Paid employment is scarce in his neck of Nova Scotia, but he finds rewards in his volunteer pastoral work in churches and at the federal prison in Springhill.

If not for his 64-year-old wife’s income as a nurse, he says they would be in dire financial straits, not unlike many struggling retirees in their community. Before speaking with Maclean’s, Corbett was digging out and potting plants from his garden to give to a 66-year-old who sells them to augment her tiny pension. “She’s not the only one. I see people on a daily basis on slave wages at McDonald’s because they can’t afford to live on their pensions.” When his wife, Susan, retires next year, however, he says they will probably have to sell their home. They have plans to buy a wooded lot, build a cabin, grow their own food and live off the grid. He figures the $100,000 they might clear in the transaction, their retirement nest egg, leaves them luckier than many.

What especially rankles Corbett is that Harper’s government scuttled plans to expand the CPP, which currently pays a maximum of about $12,500 a year (even if the average CPP annual payout at age 65, for new retirees, is just $7,602). Harper’s stance that Canadians must do a better job of financing their own retirement puts him at odds with several provincial leaders and handed Ontario Premier Wynne a high-grade election issue.

While Wynne agrees with Harper that middle-income Canadians aren’t saving enough for their retirement, there is a profound divide over the solution. The Conservatives say there are sufficient retirement vehicles, including retirement savings plans and a proposed targeted pension for federally regulated workers where the sustainability of the plan would determine the payout and benefit levels. Wynne has proposed a mandatory contribution plan for the three million Ontarians currently without a workplace pension. It would run along the lines of the CPP, with workers and employers contributing up to 1.9 per cent of earnings. The end result would almost double the $12,500 maximum payout that CPP provides, though it would be a generation before the full benefit of the expanded program is realized. “Stephen Harper, when he retires, is going to have about 10 times that amount in his pension,” Wynne said, in full campaign mode.

Her election smear doesn’t sit well with federal Conservatives. The Prime Minister’s office left it to Finance Minister Joe Oliver to respond. “It’s obvious that the Ontario Liberal government is trying to divert attention from their dismal economic record,” Oliver said in an email to Maclean’s. “In contrast, our government has lowered taxes, created more opportunities for savings and created over one million jobs since the depth of the recession. It’s unfortunate that the Ontario Liberal government is going heavily into debt and planning to raise payroll taxes on employers and employees by $3.5 billion a year.”

Corbett recalls being so smitten with Reformers that he sought Harper’s advice about leaving the NCC for a job with the fledgling Reform. The two men met for coffee, and Corbett took Harper, at his request, on a tour of the Toronto NCC offices. “Four months later, I was in Ottawa [working for Reform] and two months later, [Harper] left to head up the National Citizens Coalition,” he says. It was under Harper’s leadership that the NCC’s “Operation Pork Chop” kicked into high gear, targeting federal politicians as pension pigs swilling champagne and feasting on troughs of money. But that was then.

Even with the Conservative reforms, political pensions remain far above the norm. Gregory Thomas, federal director of the Canadian Taxpayers Federation, says the Conservative initiative regarding political pensions, which, among other measures, will more than triple the amount of pension contributions MPs must make, “are substantial victories for taxpayers.” Still, he adds, the average final age for durable members of the MP pension plan is currently 90, “so they enjoy fully indexed income for far longer than they ever served in Parliament,” he said. “We would prefer matching taxpayer contributions to an MP’s RSP, up to the same limit that applies to ordinary Canadians.”

For Corbett, the volunteer pastor, the greater concern is with the poor and struggling middle-class pensioners who, he says, are sacrificed on the altar of corporate interests. “You have someone like Stephen Harper, the majority of his cabinet and over half of his MPs who call themselves Christians, but the policies these guys are implementing, they’re anything but Christian. They’re completely contrary to the teachings of Jesus Christ.”

He’s no fan of the free-spending Ontario Liberals, but he says that Wynne’s prediction of a looming pension crisis is on the mark. “I don’t know why people aren’t marching on Parliament Hill,” he says. “There’s going to come a time, I think, when people are going to get to where they can’t afford to be silent anymore.”