Paul Wells: Exactly what happened between Tuesday’s call for calm and Friday’s ‘the barricades must come down’? 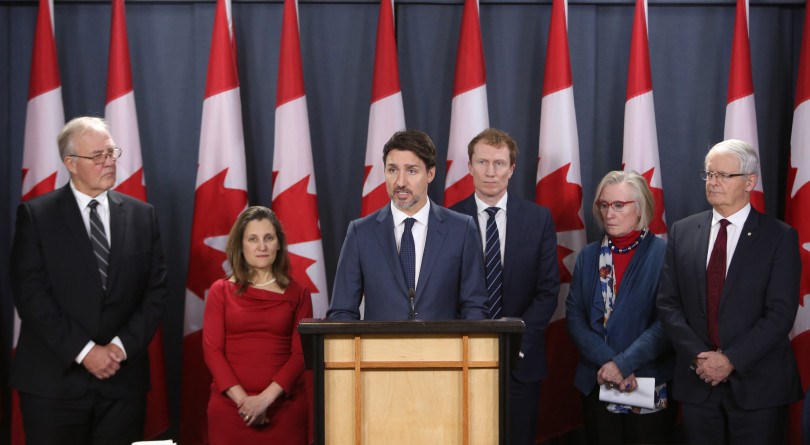 Trudeau holds a news conference with members of his cabinet to discuss the current rail blockades on Feb. 21, 2020 (CP/Fred Chartrand)

I hate to be that guy, but what the heck. “Patience may be in short supply,” Justin Trudeau said on Tuesday, 100 hours before his astonishing Friday news conference. “And that makes it more valuable than ever.”

How short? How valuable? Well, the Prime Minister’s personal store of patience, presumably ample, ran out at some point between Tuesday and Friday.

“Every attempt at dialogue has been made but discussions have not been productive,” Trudeau told a roomful of reporters across the street from Parliament.

Beside him stood Bill Blair, Chrystia Freeland, Carolyn Bennett, Marc Miller and Marc Garneau, testament to this government’s unshakeable belief that a bunch of cabinet ministers nodding mutely along with everything the Prime Minister says is somehow a reassuring sight.

“We cannot have dialogue when only one party is coming to the table,” the PM continued. “The fact remains: the barricades must now come down. The injunctions must be obeyed and the law must be upheld.”

Whereas on Tuesday he had found it “unacceptable” and “disqualifying” to see the opposition leader pro tem, Andrew Scheer, drawing distinctions among protesters and their motives, on Friday Trudeau had amped up the magnification, and suddenly he too could spot differences. On one hand, protesters motivated by “deep wrongs” and “grievances that are legitimate.” On the other, “other protests…not anchored in the deep wrongs that have been done.” This latter group might simply dislike “a particular project.” Why had he not been informed earlier?

Where Trudeau on Tuesday had stubbornly resisted establishing any hierarchy among “rights, livelihoods, the rule of law and our democracy”—and indeed been theatrically contemptuous of Scheer’s attempts to put livelihoods first—now he saw things much more clearly. “Hurting Canadian families from coast to coast to coast,” Trudeau announced, as though it were just now occurring to him, “does nothing to advance the cause of reconciliation.”

I don’t want to underline the contrast between Tuesday Trudeau and Friday Trudeau too starkly. Tonally, he was still far away from Scheer’s earlier bellicosity (“radical activists”). And it’s possible to argue, as indeed I see some colleagues are already doing on Twitter, that announcing one’s willingness to negotiate with great fanfare is a necessary predicate to legitimately tossing up one’s hands later.

But holy smokers. Even when I predicted on Tuesday this would happen (“Will Trudeau always be eager to put patience ahead of a smoothly functioning transportation network?… [I]t wouldn’t be the first time this government has swallowed itself whole”), I imagined the flip-flop would take at least a few weeks. And surely the length of a display of patience must matter, if anything does, if there’s any hope for believing that there is such a thing as substance and that this government isn’t entirely reducible to a succession of talking points and a volunteer army of social-media cheerleaders. When Mackenzie King decided in November 1944 to implement military conscription, it was two and a half years after a national referendum gave him the right to do so. I get that modern life is faster, but four days?

Maybe not even four days, in fact.

The notional motivation for Trudeau’s news conference was to report on a meeting, late Friday morning, of his Incident Response Group (IRG), which is a floating assortment of cabinet ministers and deputy ministers, along with, in most cases, the PM’s own foreign and security policy advisor and, often, the Chief of the Defence Staff. Attendance depends on the topic. Announced in 2018, the group—or assorted groups operating under the name, because the only constant is the presence of Trudeau himself—has met far more frequently since the 2019 election than before. Or its meetings have been reported out to Canadians more frequently.

I’ve heard conflicting opinions on the IRG’s utility, from people in government who work closely with it. Surely it’s useful for any prime minister to talk to ministers and deputies on important issues, although the transformation of “meetings with ministers and deputies” into “Incident Response Group” smacks of grade inflation.

But here’s an odd thing. If the IRG decided on Friday that the barricades must come down, then what got into Marc Garneau that made him say, the previous evening on the CBC radio show As It Happens, “We need to bring those barricades down. We need to bring them down now. And we’re hoping that that is going to happen”? And what made Bill Blair say the same thing in nearly the same words on The Current, before the IRG meeting began?

Similarly, Trudeau mentioned at his news conference that a Wet’suwet’en elder had been on the phone, only minutes before, with his ministers Marc Miller and Carolyn Bennett. Bennett’s inability to have a conversation with any of the elders had been a point of frustration all week.

Why announce the end of his patience if, minutes before the announcement, a major sticking point had suddenly ceased to stick?