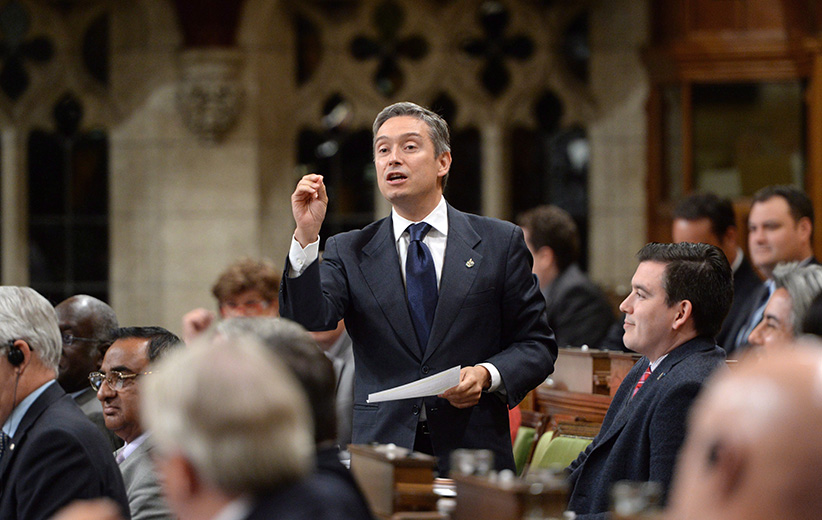 Francois-Philippe Champagne responds to a question during question period in the House of Commons on Parliament Hill, in Ottawa on Friday, Sept. 30, 2016. (Sean Kilpatrick/CP)

Arguably the biggest promotion in today’s federal cabinet shuffle goes to François-Philippe Champagne, who vaults from parliamentary secretary to Finance Minister Bill Morneau, a supporting role just outside cabinet, to succeeding Chrystia Freeland in the high-profile post of minister of international trade.

I say “arguably” because an obvious case could be made that Freeland is, in fact, the key moving part in the shuffle. In taking over from Stéphane Dion as foreign minister, she notches up noticeably in prestige and profile. But Champagne, previously known only to attentive Ottawa insiders, in a single stride becomes an unignorable front-bench player for anyone watching federal politics.

This doesn’t come entirely as a surprise. Before he jumped into politics, Champagne held down serious jobs in international business. A lawyer, he was senior counsel and vice-president at ABB Group, a Swiss engineering giant, and then had a string of titles, including strategic development director, at AMEC Foster Wheeler, a big London-based project-management company focused on the energy sector. But he never hid his political ambitions, and returned to Shawinigan, Que., where he grew up (yes, in Jean Chrétien’s hometown) to win the Saint-Maurice–Champlain riding in the 2015 election.

RELATED: Maclean’s builds a cabinet from the cutting room floor

Last month, before rumours of an imminent cabinet shuffle were much in the wind, I interviewed him at his office just off Parliament Hill. An upbeat, diminutive, and youthful 46, he riffed confidently on the challenges facing the Canadian economy.

Now that he’s taking over the trade portfolio, Champagne’s perspective on Canada’s position in the world economy is even more relevant. He sees plenty of room for improvement. For instance, he cited Australia and Britain as countries that do a better job selling themselves to international investors. Canada’s profile abroad is too often, he suggested, a fragmented one.

“I have been in a room in London where provinces were pitching against each other,” he said, recalling his days in the private sector. “I didn’t think, as a Canadian expat, this really was the best way.” Champagne touted Morneau’s plan to create something called the Invest in Canada Hub, announced in last fall’s economic statement, as a step toward a “one-stop shopping” solution to marketing the national brand.

He argued the time is right for Canada to present itself more assertively, checking off the country’s selling points in an unsettled world. “Stability, predictability? Yes, you can see ahead. Rule of law? You know, if you build a plant here, 50 years from now it’s still going to be yours; you’re not going to have a change of regime. And you talk natural resources, low cost of electricity, fairly low cost of doing business, favourable tax rates.”

After Champagne waxed on for a while about Canada’s advantages as an open, trading economy, and a beacon for foreign investment, I asked if that vision remains politically viable in the era of Donald Trump and Brexit. Isn’t it likely that many Canadians, deep down, share the anxieties of English and American voters who responded last year to more protectionist, defensive rhetoric?

Champagne said that’s not what he hears in his own rural and small-town Quebec riding. He claims voters there, from truck drivers to lumber industry workers, tend to grasp that trade is essential to their livelihoods. But it’s crucial, he argued, for governments to make sure most people can see the benefits of liberal economic policy flowing their way.

So he cited measures from last spring’s budget, including the new Canada Child Benefit and the boost to the Guaranteed Income Supplement for lowest-income seniors. “People get it,” he said. “They see that, from the growth that we’re aspiring to achieve for the country, there is a piece of that for them.”

He contrasted that with the discontent he noticed, back when he was based for five years in London, over how globalized trade and investment seemed to benefit only “a very discrete group” of the highly educated Brits. He added cautiously: “It’s not for me to talk about other countries, but I’m just talking from personal experience. You could see at some stage there was this imbalance.”

RELATED: Who benefits most from the Liberal child benefit?

For Canada to avoid a Brexit-like backlash, the economy must keep generating wealth and spreading it around. Champagne agrees with economists who say that will be hard to sustain, since our workforce just isn’t expanding like it used to. “A lot of the growth in our country came after the Second World War, with the influx of population from Europe, mainly. Then in the 1970s, women came to the workforce,” he said. “Now what we’re facing is that population in Canada is aging more than the world population.”

He said the federal policy response to the demographic crunch of more retired and few working-age Canadians can’t be merely incremental. “In an era of slow growth we need to have big, bold ideas,” he said. “We need to be ambitious.”

Up to now, Champagne has worked in Morneau’s shadow, helping develop policy ideas like the finance minister’s infrastructure bank and investment hub. Freeland showed, when she was finalizing Canada’s trade deal with the European Union, how a trade minister can make a mark—and secure a cabinet promotion. Now, Trudeau is giving Champagne his chance, and Ottawa has a key new player to watch.