Free advice to the NDP: Measure twice, cut once

Paul Wells: The NDP was headed toward a possible leadership putsch on Tuesday. It's time for the party to start asking: does it have a plan? 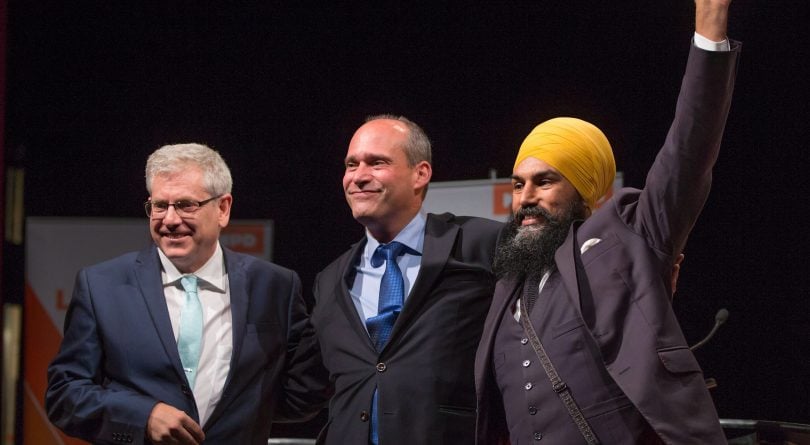 That was a really nasty crisis the NDP was headed into until the elements of a deal emerged on Tuesday evening. I’m not sure the party is out of the woods yet. Everyone would do well to consider the stakes.

The story so far: David Christopherson, the party’s MP for Hamilton Centre, was the only member of his caucus to vote against the Trudeau government’s pro-choice “attestation” on the Canada Summer Jobs Program application. Jagmeet Singh promptly stripped Christopherson of his position as deputy chair of the Commons Procedure and House Affairs committee, which is basically process nerd heaven and does contribute usefully to the running of MPs’ common workplace.

On the general principle that public disputes are always good, Singh’s decision was roundly criticized by my colleagues. Less predictable was the criticism aimed at Singh from inside the party’s own caucus, in the form of a tweet, and then a newspaper interview, from Charlie Angus, the party’s popular MP for Timmins—James Bay. Punishing Christopherson was “not a way of building solidarity,” Angus said. His colleague Romeo Saganash agreed with him.

Well, this was all turning nasty. Angus had competed with Singh for the party leadership last year. He came in second, with a little less than half Singh’s support. He represents not only himself, but a significant fraction of the party. When you’re in that position, accusing your leader of failing to build solidarity is, itself, not a great way to build solidarity.

Singh’s hold on the leadership must already be judged shaky: A couple of weeks ago, when his position on Sikh nationalism was the hot issue, the party held an extra Monday caucus meeting so MPs could vent and Singh could find the language to calm the waters. A new open challenge to Singh’s judgment, from two and maybe eventually more MPs, would endanger his ability to lead the party. (I’ll happily stipulate, by the way, that Angus was sincere in his opinions, and not plotting against the new leader. But the effect would be the same.)

RELATED: Jagmeet Singh on how the NDP can win

Then on Tuesday, a round-robin denouement played itself out on, mostly, Globe reporter Laura Stone’s Twitter feed. First Singh put Christopherson back on the process-nerd committee. Then Christopherson said he’d spent a lot of time talking to the boss and had discovered “complete trust in his leadership.” Then Angus congratulated the other two for rediscovering the spirit of solidarity. It was as choreographed as the National Ballet.

Thus ends the latest ominous rumble from Jagmeet Singh’s NDP. My humble advice to the party between now and the 2019 election is: I get that you’re nervous. Keep asking yourselves: “Do I have a plan? Or just nerves?”

Thinking strategically does not, I’m given to understand, come easily to New Democrats. It’s part of their charm. Heart over head. It helps explain why they have usually chosen leaders with no experience in the House of Commons, and why they defenestrated the superbly competent, if charmless, Thomas Mulcair for the crime of trying to figure out what Canadians want in a prime minister. Sometimes making it up as you go along works out! But at some point you need to look up from the ball and take the measure of the field.

There’s a year until the next federal election campaign begins. In important ways it’s already going on. Switching leaders is a time-consuming process that can have unpredictable results. And unlike in 2016, when New Democrats could fool themselves that something wonderful would magically happen after they turfed Mulcair, now they know what a post-Singh leadership field would look like. It would look like Guy Caron and Niki Ashton and a seriously damaged-goods, remind-us-again-why-you-dragged-us-into-this-mess Charlie Angus. And incidentally, all those candidates would look even whiter than they and I already do after Singh became the shortest-lived leader in the party’s history.

Some New Democrats will be amazed to see me speculating about a possible leadership putsch. But until Tuesday night’s truce, that’s where the NDP was heading, and it might start heading there again. Saying so out loud might be a first step toward thinking rationally. A belated first step, I’d say: I told you getting rid of Mulcair wouldn’t solve your problems. Having shot yourself in the foot, try not to shoot the other foot.

Especially because Singh has not actually shown worse judgment than Charlie Angus lately.

I pointed out two weeks ago that Singh was avoiding hard questions on his relationship to Sikh nationalism. The next day he started answering the questions, in a prepared statement and a blitz of interviews. Unlike some of his online defenders, he acknowledged the legitimacy of the questions. He improved his answers. He sounded thoughtful, not just slick and lawyerly. Lots of people won’t be convinced. But he adapted when others would have dug in, ruinously.

On Christopherson’s brief stint in the penalty box, it’s actually not as though Singh acted out of pure spite. One of the questions in play, admittedly distorted in the funhouse mirror of the Liberals’ badly-designed attestation form, was reproductive choice. Christopherson’s vote, I’m told, didn’t go over very well with a lot of NDP women on Parliament Hill, and it may not be a coincidence that Singh’s tormentors this week—Christopherson, Angus, Saganash—were all men.

I’m not in much of a mood to arbitrate between Christopherson’s position and Singh’s. I just want to point out that Singh and his staff had to weigh competing legitimate interests. As a leader must. And that the week went from dangerous to manageable as soon as everyone replaced Twitter chest-beating with face-to-face conversation.

Some final advice, offered free to the party that historically takes my advice even less often than the others. Singh had all kinds of reasons for not seeking a quick seat in the House of Commons, but surely he is starting to notice the price. Last week’s Conservative filibuster over Justin Trudeau’s India trip didn’t settle much, but it was the kind of crazy partisan hothouse that cements a caucus’s loyalty to its leader. At least, it did that for the two parties whose leaders went through the same thing their ordinary MPs did. It seems to have given some New Democrats a chance to stew in their resentment and suspicion of the new boss. With the results we saw this week. Word to the wise.