Gerald Butts back into federal politics 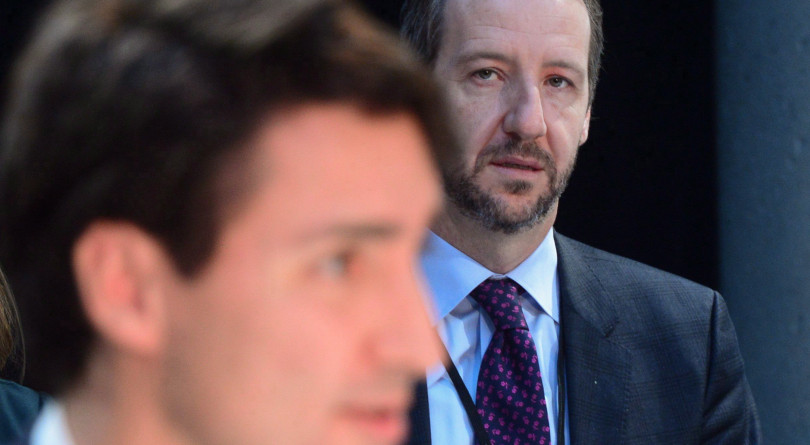 Justin Trudeau's then-principal secretary Gerald Butts looks on as the Prime Minister delivers his opening remarks during the Meeting of First Ministers in 2016. Butts has returned to advise the Liberals on their re-election strategy. (Sean Kilpatrick/CP)

With election day three months away, the mostly likely scenario right now is a minority government, according to the latest vote projections from 338Canada. As 338Canada founder Philippe J. Fournier writes at Macleans.ca, that prospect raises an immense number of questions:

Should the Liberals win the most seats, would they be able to forge a temporary alliance with the Greens or NDP, despite the purchase of the Trans Mountain Pipeline? Would those two parties require a promise of electoral reform in exchange for their support?

If the Conservatives win the most seats, will they even be able to win the confidence of the House? Or will they have painted themselves in such a corner that the smaller parties refuse to support them in that quest? Could it be majority or bust for Andrew Scheer?

Dig in to 338Canada’s full regional analysis here and keep reading below for more from the world of #cdnpoli polling.

Moooooove on: It would be swell if our leaders would stop treating Canadians like idiots, writes Paul Wells, but instead we now have the Conservatives and Liberals slinging mud at each other over dietary recommendations, starting with  Scheer’s pandering appeal to the dairy lobby and his claim that Health Canada’s latest food guide is not “based on science“:

The United Nations Food and Agriculture Organization says milk hasn’t been found to contribute to obesity. (I’m mostly dealing with Scheer at this point, but just you wait, I’m going to get to Liberal supporters who, now that the battle over Scheer’s comments has been joined, will spend the next week or two on Twitter treating milk as functionally equivalent to strychnine.) (Maclean’s)

Back for more 1: Clearly not satisfied with his massive imaginary fortune, Gerald Butts has stepped back into federal politics as a senior advisor to the Liberal re-election campaign, the party confirmed over the weekend. Butts, you’ll recall, resigned earlier this year amid the SNC-Lavalin controversy, and the return of Justin Trudeau‘s close friend and advisor was met with cheers from Liberal diehards and jeers from Trudeau’s opponents — “disappointing,” said Singh, while Scheer tweeted the “team that brought Canadians the SNC Lavalin scandal is right back together” (CTV News)

Back for more 2: Election 2019 will see the return of 29 former MPs as hopefuls. Among the candidates eyeing a reunion with Parliament Hill: Conservatives Leona Aglukkaq, Kerry-Lynne Findlay and John Williamson, while Jack Harris, Andrew Cash and Malcolm Allen are back for the NDP. No Liberals seeking sequels yet. (Canadian Press)

May’s power play: Can Elizabeth May make Scheer find climate change religion? She thinks so, telling the Canadian Press she hopes to be in a position to prop up a minority government so long as it has a serious plan for fighting climate change, even if the party clinging to power is the Conservatives: “People change their minds when they see the dynamic of a way a Parliament is assembled and maybe think, ‘Killing carbon taxes isn’t such a good idea if the only way I get to be prime minister is by keeping them’.” (Canadian Press)

Not here: British Columbia’s attempt to block Alberta from ‘turning off the taps’ and restricting the flow of oil to the province got turfed by an Alberta judge, who said ‘take it up with the federal court’. (Canadian Press)

It’s not that bad: Canada’s three main federal leaders all say they think Quebec’s secularism law, which bans civil servants from wearing religious symbols, is wrong but so far none have committed to joining a legal challenge to the legislation in vote-rich Quebec. The National Council of Canadian Muslims and the Canadian Civil Liberties Association have launched a challenge against the law, while B’nai Brith Canada called on Trudeau to take action. “The election is not really our issue,” said Harvey Levine, director of the Quebec arm of B’nai Brith Canada. “The issue is standing up for minority rights, for minorities right across Canada.” (CBC News)

Speaking of which: Singh got the profile treatment from the New York Times over the weekend, which called him a “historic contender” for Canada’s top political job. His electoral prospects in Quebec, and the province’s religious symbols law, came up:

“Quebec is not ready for a prime minister with a turban,” said Gérard Bouchard, an eminent historian and sociologist with the University of Quebec in Chicoutimi, noting that the historical repression of the Roman Catholic church in Quebec had translated into a visceral distaste for religion.

Mr. Singh, though, believes his progressive policies can overcome that.

“The bill doesn’t speak to the Quebec that I know or the people who believe in the shared values I have,” he said in a phone interview from Ottawa. (New York Times)

What the polls are saying about Election 2019

Dump Trump eh: Canadians still really don’t like Donald Trump. In a thoroughly hypothetical online poll of 1,500 Canadians by Abacus Data, nearly eight in 10 said they would chose one of five leading Democrats before Trump if they were allowed to vote. Which of course they can’t. Trump’s unpopularity among Canadians nevertheless poses a challenge for Scheer, since between 41 and 46 per cent of Conservative Party supporters in the poll said they’d hypothetically vote for Trump.  (CTV News)

Gun bad good: The majority of people in Toronto favour a gun ban as a way to reduce shootings by gangs. Forum Research found 62 per cent of residents in the Greater Toronto Area believe a handgun ban would cut down on gang shootings, but the results were deeply divided between Liberals and NDP supporters who back a ban, and Conservatives and Peoples’ Party supporters who don’t. (Forum Research)

Similarly to 338Canada’s projection, a seat forecast from the Laurier Institute for the Study of Public Opinion and Policy (LISPOP) shows the Conservatives and Liberals at a virtual tie, with the former leading the latter 148 to 145. The dismal showing for both parties reflects how unimpressed voters are with their options, says LISPOP member Barry Kay: “The momentum, if we can call it that, is now moving back towards the Liberals. It’s a horse race, a horse race where I must say most people don’t seem to like any of the horses. I think that’s why the Bloc [Quebecois] is up in Quebec and the Greens are having historic gains, although they’re not very large.” (Global News)