Get ready for a shake-up 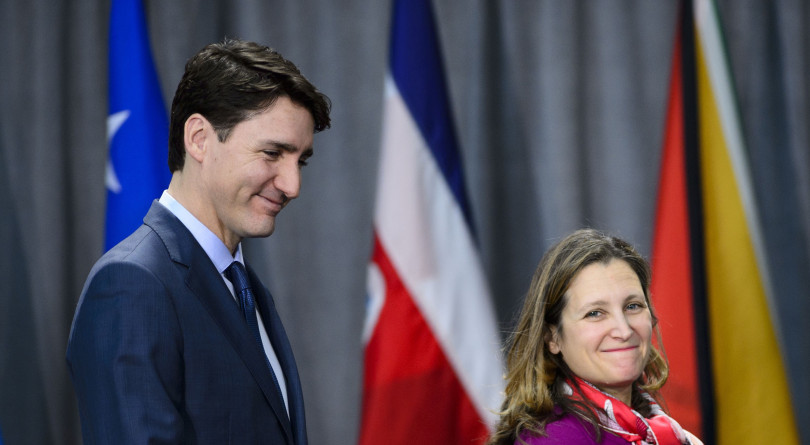 Going through changes: Nearly a month after his party limped to victory in the election, Justin Trudeau will unveil the faces of his minority-government cabinet this afternoon at Rideau Hall. As to who those MPs will be, Tuesday brought several revelations about the shake-up to come.

For one, Chrystia Freeland will leave her post as Canada’s top diplomat, CBC-Radio-Canada reported, with François-Philippe Champagne (formerly the infrastructure minister) taking her place. And though it wasn’t yet confirmed where Freeland will land, it’s expected Trudeau will name her his minister of intergovernmental affairs or deputy prime minister, tasked with addressing the rising tide of Western alienation at a time when the Liberals have no MPs representing ridings in Saskatchewan or Alberta, where Freeland was born.

Catherine McKenna will also depart her high-profile role as minister of environment and climate change and move to a new gig as infrastructure and communities minister. Jonathan Wilkinson, who was responsible for fisheries and oceans, will step into her shoes.

The big cabinet reveal, which in 2015 entailed many a photo of Trudeau clasping cabinet minister shoulders and staring into their eyes, will kick off at Rideau Hall at 1:30 ET. Check back with Maclean’s throughout the day for analysis on who’s in and who’s out, who’s up and who’s down.

Citizen Scheer: Has Andrew Scheer renounced his U.S. citizenship? Not according to the latest list of ex-American citizens published regularly by the U.S. federal government. But a spokesperson for the Conservatives said Scheer has “filed his paperwork and the process is ongoing” while experts in the convoluted process of de-Americanizing oneself said the absence of his name on the list doesn’t mean much.

A question rang out across Alberta (and beyond) as people learned that Jason Kenney’s government will legislatively turf the elections commissioner who has been aggressively investigating and penalizing United Conservative Party members’ violations of election laws. How the (expletive) does he think he can get away with this?

The effective response from Kenneyland comes in the form of another question. Don’t you remember the election last spring?

That isn’t to say the government takes a to-the-victor-belong-the-spoils approach, though Kenney and colleagues do enjoy smushing their win in the Alberta NDP’s noses at every opportunity.

Rather, it harkens back to the dismissive shrug with which United Conservatives greeted the scandalous revelations that came out about them during the provincial campaign. Read more ››

Staying with Alberta, the province’s energy minister wants Parliament to return early to end a strike by 3,200 CN Rail workers. Sonya Savage was joined by Saskatchewan Premier Scott Moe in urging the Liberal government to introduce back-to-work legislation, a favourite tactic of former Conservative prime minister Stephen Harper that Trudeau has shown no interest in adopting.

Tell us what you think: Help us better understand what you’d like from the Maclean’s Politics Insider newsletter. This short survey will only take a few minutes to complete. We really appreciate the feedback.