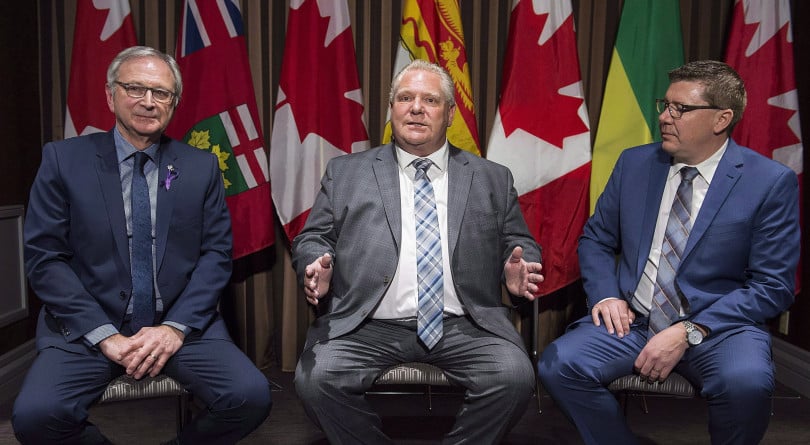 Gauging reaction: It might be overstating things to say federal-provincial tensions have gone nuclear, but we do have three premiers who oppose the Trudeau government’s carbon tax calling for the development of Small Modular Reactors as their preferred solution to fighting climate change. Saskatchewan Premier Scott Moe, Ontario Premier Doug Ford and New Brunswick Premier Blaine Higgs signed an agreement in Toronto on Sunday to develop and deploy SMR technology, a small type of portable nuclear reactor that can be used to power remote communities and heavy industries. Right off the top Moe framed the nuclear announcement as a tax-averse climate change solution. “We believe we can do this without unnecessary taxes that burden families, businesses; taxes that really do little in actually reducing emissions directly,” he said.

The rest of the premiers made their way to Toronto Sunday and whether or not they sign onto the interprovincial-nuclear pact (“The more, the merrier,” said Ford), the group will have plenty to talk about at the special post-election, getting-along-with-Justin Trudeau meeting of the Council of the Federation. As chair of the Council Moe hopes the premiers reach consensus on amendments to the fiscal stabilization program, while he’ll also steer discussion to the carbon tax and other Liberal environmental policies. But with several premiers taking shots at each other in recent weeks — over Bill 21, pipelines, Wexit and the Winnipeg Jets roster —  it’s not clear how much the group can accomplish in one day.

Solving the conundrum at the heart of Canadian conservatism: The federal Conservatives have a ‘Jeremy Corbyn’ problem, writes Andrew MacDougall. That’s because the party members who will decide Andrew Scheer’s fate next spring are not representative of the country and may be receptive to their leader’s message even if other Canadians are turned off by him when it comes time to vote:

Which means the Conservative Party of Canada can probably forget about power until it can solve the conundrum at the heart of the modern party: how to carry the base along while growing it into more centrist territory.

The simple truth is that no existing or prospective Conservative leader can ignore the fact that the movement includes an overwhelming segment of the minority view on issues like abortion, gay marriage and immigration. Nor, however, can the leader ignore the fact these views are a big part of the barrier to growth. More to the point, the country isn’t likely to get more conservative on culture or social issues. To put it in terms that might not be well received by the base: if the mountain won’t come to Muhammad, then Muhammad must go the mountain. Read more ››

Just before the weekend Scheer once again asserted he has no intention of going anywhere, despite a growing chorus from within his party urging him to step aside. “I’m here to tell you that you are not alone,” he told a crowd of Alberta conservatives at the annual meeting of the provincial United Conservative Party. “We fell short of our goal, yes, but more Canadians, not just here in Alberta and Saskatchewan, more Canadians right across the country voted for our plan for a united and strong Canada,” he said. “I am listening to you and learning what we need to change in order to deliver the victory we need next time. We cannot give up the fight now.”

Yet his message-reset effort was once again knocked off course when his newly appointed deputy leader, former Liberal Leona Alleslev, delivered a clunker of an answer to the CBC on the question of whether she’s bothered by her boss’s refusal to participate in Pride parades: “I think that’s obviously his choice and we live in a country where that’s his choice. Have we asked anybody if they’ve marched in a St.Patrick’s day parade?” It didn’t take long for Alleslev, who has marched in Pride parades herself and  has stated her support for same-sex marriage, to apologize for comparing the two events. Over on CTV’s Question Period she did a better job of defending her boss sans foot-in-mouth: “I think that there are certain obviously disgruntled people [in the Conservative party] and I’m very disappointed in them, because if they really cared about the country and they really cared about the conservative movement, they would wait for the external review that we are investing in, to find out exactly where we can do better and what we did wrong.”

If it wasn’t clear already, Jenni Byrne is one of those disgruntled people, and Stephen Harper’s former campaign director put it in pachydermal terms on Global’s West Block:

This—the question of Andrew’s leadership has been spoken about among Conservative members, both in caucus and at the grassroots for the last month. The last week, it has gripped to the party in a way that nothing else is being discussed, and it’s going to continue to do that leading into the leadership race. If we continue to do that, we are going to do nothing but give Justin Trudeau a free ride in terms of the next five months because that’s all people are talking about, Garnett, because it is not just an elephant in the room. It’s a bunch of elephants in the room and that is all what people are talking about.

Memo from Meng: On the anniversary of her arrest in Vancouver on a U.S. warrant for fraud, Huawei executive Meng Wanzhou penned a letter to her supporters. “Thanks to the kindness of the correctional officers and other inmates at the Alouette Correctional Centre for Women, I was able to make it through the worst days of my life,” she wrote. “When the judge announced that I was granted bail, the applause in the public gallery made me burst into tears.”

In other news, Michael Kovrig and Michael Spavor, two Canadians seized by China in retaliation for Meng’s arrest, did not post letters, continue to be held in isolation with lights on 24 hours a day, and without access to lawyers or their family.

Chime in: Help us better understand what you’d like from the Maclean’s Politics Insider newsletter. This short survey will only take a few minutes to complete. We really appreciate the feedback.