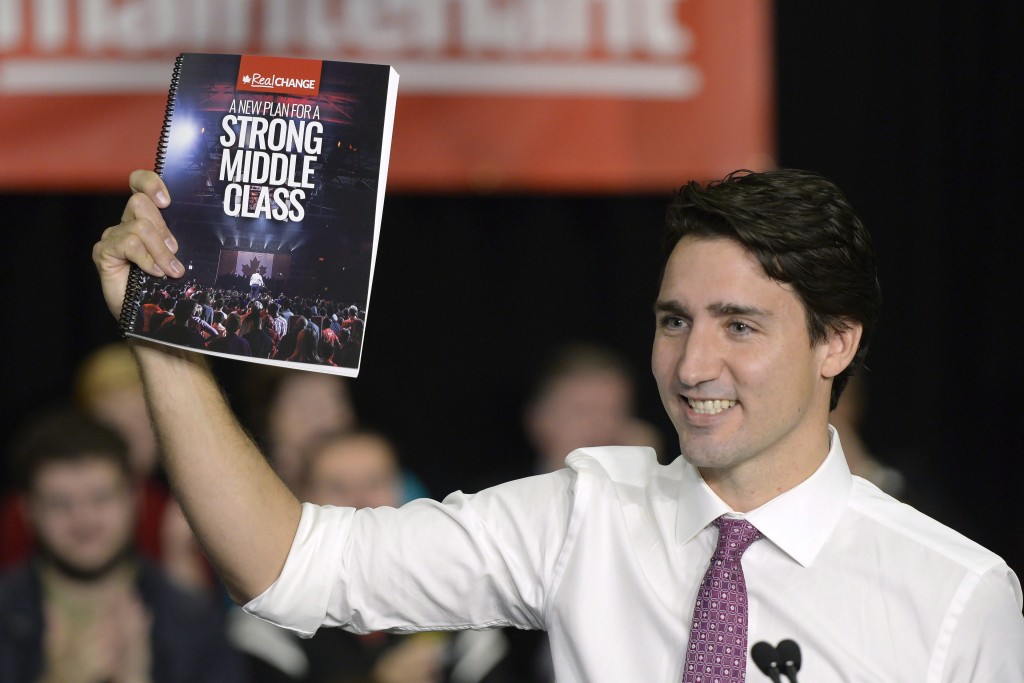 Liberal Leader Justin Trudeau holds up his party’s platform at a press conference in Waterloo, Ont. on Monday, October 5, 2015. THE CANADIAN PRESS/Paul Chiasson

WATERLOO, Ont. — Liberal Leader Justin Trudeau offered to help students in search of higher education and families trying to raise healthy children Monday as he fleshed out the last remaining bits of his party’s election platform.

And he promised his government would put the newly signed Trans-Pacific Partnership to a “fulsome” discussion with parliamentarians and the public before making a decision on whether to vote for it.

“We will ratify this properly in the House of Commons after a fulsome and responsible discussion,” Trudeau said during a campaign event at Wilfrid Laurier University in Waterloo, Ont.

The main points of the Liberal platform — three years of deficit spending on infrastructure, higher taxes on the wealthiest Canadians and lower rates for most others — were released long ago.

But a few new details came out Monday as he released the final version of the party’s entire platform.

They include new restrictions on marketing unhealthy food and drinks to children — restrictions similar to ones already in place in Quebec — and regulations to limiting the amount of trans fats and salt in processed foods.

Popular among the university crowd was a plan to increase Canada Student Grants by 50 per cent to $3,000 a year. Trudeau said a Liberal government would allow students to wait until they’re earning at least $25,000 a year before requiring them to start repayment.

“Finding money to pay for school is only half the battle,” he said. “Repaying those loans after you leave is often just as challenging.”

Trudeau also said a Liberal government would try to ease the high cost of living in Canada’s North by increasing tax deductions for northern residents and spending more money on food shipping subsidies.

As news filtered out about the Trans-Pacific Partnership, a massive trade deal involving 12 major economies accounting for 40 per cent of the world’s trade, Trudeau remained cautious, saying he would wait to see details of the deal before committing himself.

Still, he seemed to acknowledge it would be tough for Canada to remain on the sidelines, especially in industries such as the auto sector, where supply chains already cross borders.

“We know that Canada is extraordinarily integrated in terms of supply chains with the U.S. and Mexico,” he said.

“The idea that the U.S. and Mexico would engage in a trade deal of this size and somehow it would not be in Canada’s interests to not be a part of that deal I think is something we’re going to have to look in to.”

The deal also seems to offer a mixed bag for Canada’s supply-managed dairy producers, he said.

“The Liberal party is committed to protecting supply management,” he said. “There are some concerns (in the deal) and there are new advantages.”

He promised to consult the public before ratifying the deal.