Greater expectations: Why the NDP is fighting to be a contender

How is it Tom Mulcair and the NDP are once again an underdog, weeks after being favoured to win? 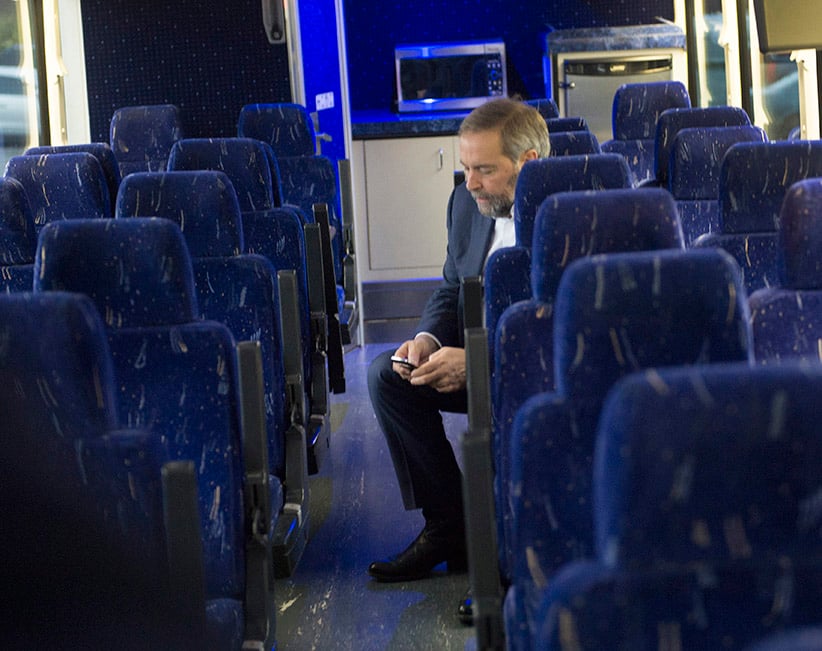 The party leader is expected to entertain questions from the news media nearly every day of a campaign, but these meetings of politicians and reporters are no longer staged in quiet siderooms after the leader has made his announcement of the day to a TV-friendly room full of enthusiastic partisans. Rather, the people who stage political events have realized that if their leader is to take questions, those same enthusiastic partisans might as well be around to cheer every answer.

That might explain, at least in part, why NDP Leader Tom Mulcair sounded like a high school football coach (for an underdog team) addressing a pep rally last Friday, when a reporter asked him about the possibility that Quebec voters now consider the Liberals more likely to form a government and, thus, they are the strategic choice for any voter who wants to be rid of the Conservatives. “As I had occasion to say a few minutes ago, the NDP requires only 35 more seats to defeat Stephen Harper’s Conservatives; the Liberals would require at least a hundred more,” Mulcair said. “I was in southwestern Ontario on Sunday and I travelled from Brantford to Waterloo to Stratford to London to Sarnia to Essex . . . I know that those are six Conservative ridings where the NDP is going to win on Oct. 19.”

Mulcair hit that last sentence like an applause line. The crowd, assembled on four sides around him, duly applauded. The NDP leader waited for the cheering to subside, then pressed forward, his voice rising, his right hand gesturing to illustrate and punctuate his points. “And I said every step of the way, since the beginning of this campaign, that this is the first time in Canadian history that we have a three-way race. For 148 years, Canadians have been told they have no choice. When they get tired of the Liberals and the sponsorship scandal, they have to go back to the Conservatives. And when they get tired of the Conservatives and the Senate scandal, they’re . . . hold on. This time, there’s something else,” he said. “This time, for the first time in Canadian history, the NDP is the official Opposition. We worked hard to get here. We proved that we have the team, the vision and the plan to undo the damage done by Stephen Harper, and a way forward to make a fairer Canada, where there’s opportunity for all.” His supporters stood to applaud. He waited for the applause to quiet.

“That’s what this election is about. People on Oct. 19 get to decide whether we want four more years of Stephen Harper, or Liberals who have supported Stephen Harper on all the key issues—or a progressive Canadian NDP government that will take us forward,” he concluded, chopping his right hand in the air. “That’s the choice on Oct. 19.”

The occasion was, officially, a town hall gathering in Montreal, coinciding with the release of the NDP’s election platform. But this was also something like a TV lawyer passionately pleading his client’s case.

In the late stages of this federal election, the NDP is once again fighting to be considered a serious contender. That’s a familiar position for the traditional third party, but, in this case, the NDP is just weeks removed from being the favourite to form the government this fall. Four years after winning 103 seats and displacing the Liberals as official Opposition, the NDP is running third and the Liberals are surging. The NDP leader’s invocation of 148 years of history might hint at a need for change, but it also underlines the monumental nature of the mission.

Back on Aug. 24, at a campaign event in Toronto, Stephen Lewis, the former leader of the Ontario NDP, preceded Mulcair to the stage. National polls continued then to give the NDP an overall lead, and the esteemed progressive firebrand—son of David Lewis, the second leader of the NDP—was resplendent, as he sang of the possibility of an NDP government in Ottawa. “I’ve waited 75 years for this day,” he said after explaining how he’d been licking stamps for party mailouts at the age of two. In the campaign’s fourth week, the NDP averaged—as per the tally of Eric Grenier at ThreeHundredEight.com—33.9 per cent in national polls, five points ahead of the second-place Conservatives. But, by the end of last week, Grenier’s aggregate average put the NDP at 23.4 per cent, eight points behind the second-place Conservatives.

The emergence of the niqab as a point of debate is perhaps the most obvious factor in the NDP’s slide. Mulcair’s opposition to the government’s attempt to ban the veil during citizenship ceremonies has coincided with a significant drop in support for the NDP in Quebec, where support for a ban is strongest. But the party’s troubles might have preceded the niqab debate. According to the analysis of pollster Greg Lyle of Innovative Research Group, the NDP began the campaign with the support of a fifth of those voters who would traditionally align themselves with the Liberals. But half of those voters have returned to the Liberals, as the brands of Justin Trudeau and his party have improved.

The Liberals might have benefited from the relatively low expectations of Trudeau when this campaign began—the Liberal leader’s image battered by months of Conservative attacks—but the Liberals were also aggressive with their own advertising in the earlier days of the campaign, whereas the New Democrats were comparatively quieter. “They started this campaign with the Liberals completely vulnerable to them, and they made a bad choice,” Lyle says of the NDP. “They decided to wait until the end of the campaign instead of finishing them off there and then.”

While it has been suggested that the Liberals have effectively run to the left of the NDP with an allowance for deficits in the next three years, the NDP has not suffered the sort of left-wing revolt that beleaguered the Ontario NDP in 2014, when a number of activists publicly castigated the party for being insufficiently progressive. “I do really think it’s clear that there’s no way you can look at the NDP platform and not think that’s a progressive platform. It’s a social democrat’s dream platform,” says Linda McQuaig, the progressive journalist and activist now running for the NDP in Toronto Centre, citing child care and a boost to the federal minimum wage, among other policies. McQuaig argues that there is nothing “inherently progressive” about running a deficit, but that willingness to run a deficit did give the Liberals a certain leeway the NDP might not have been able to afford; committing to run a deficit might have only conﬁrmed for many voters the lingering notion that the NDP can’t be trusted to prudently manage the national treasury.

In the closing days, the NDP has embraced its opposition to the Trans-Pacific Partnership (TPP) trade deal, a move that might harken to an older idea of the NDP, but a position that was helpfully bolstered by Hillary Clinton’s declaration that she has misgivings. It’s possible the TPP could repeat some of what C-51, the government’s anti-terror bill, accomplished for the NDP: setting up Mulcair as the principled opponent to Harper, with Trudeau caught between them. (About the TPP, Trudeau says the Liberals are withholding judgment until the full text is released.)

The NDP is also appealing to electoral math. The “35 ridings” Mulcair referred to are mostly Conservative-held seats where the New Democrats think they can win—seats in southwestern Ontario (where the TPP’s ramifications for the auto sector might loom largest), Saskatoon, Edmonton and the interior of British Columbia—and, whereas the Liberals must at least quadruple their 2011 seat count to form government, the NDP needs only to improve their total by a few dozen. “The offer at this stage is, if you are interested in getting rid of Stephen Harper, the NDP has the clearest path,” says NDP strategist Brad Lavigne. “That message is resonating.” That, of course, is premised on the NDP holding the seats where it is the incumbent party, a premise that might be challenged by national polls. “The national numbers,” Lavigne says, “don’t tell the story that’s transpiring on the ground.”

The NDP is targeting Trudeau with a series of radio ads—a new TV ad will roll out in the final days—and Mulcair did 18 media interviews over two days in Toronto and Montreal last week. Lavigne says the New Democrats did well over the Thanksgiving weekend to get their voters to advance polls, and organizational strength is an unknown factor until the votes are counted: It remains to be seen, for instance, whether the Liberal party has rebuilt itself sufficiently to fully capitalize on its polling advantage. The NDP vote is thought to be more efficient than the Liberal vote, so far as translating into seats, and it is also simply true that the NDP has already shown itself capable of the improbable: Jack Layton’s rallying cry of “Don’t let them tell you it can’t be done” still rings in the ears.

The NDP has run the best-funded campaign in party history—the party reported raising more than $9 million in the third quarter of this year, a record for the NDP—and is still projected to win 80 or more seats, enough to hold sway in a hung Parliament, and perhaps a demonstration that the NDP is still a much more significant force than it was before 2011. “The NDP is well-positioned to win the second-greatest victory in the party’s history,” Lyle wrote in a commentary last week, adding, “In any other election, that would be cause for celebration.”

Indeed, for the first time in Canadian political history, the NDP’s final result will be measured against the possibility of forming a government.