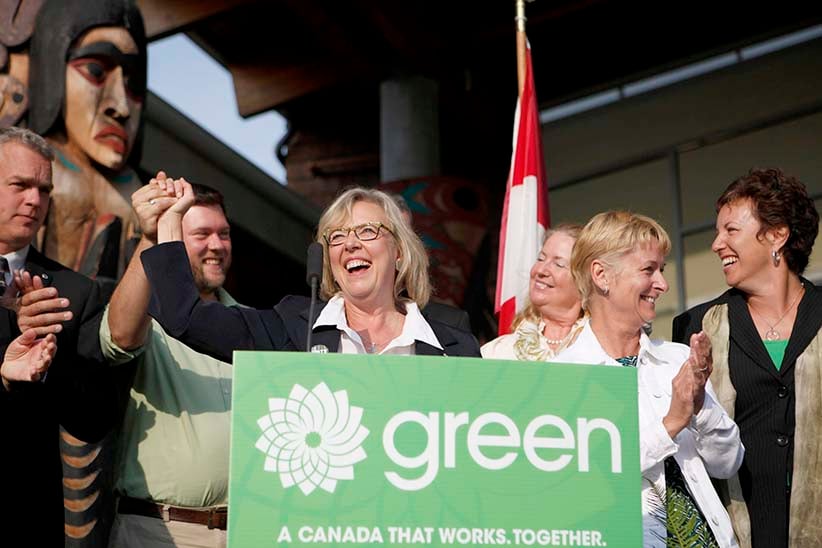 Elizabeth May, Leader of the Green Party of Canada, along with Green candidates and supporters, kicks off her election campaign from the Mary Winspear Community Centre in Sidney, B.C., Sunday August 2, 2015. (CHAD HIPOLITO/CP)

VICTORIA – Elizabeth May strolled through Green party election headquarters Monday holding hands with her daughter, Cate May-Burton.
The polls had just closed on the West Coast and the Green party leader was beaming, as her forecast of a Stephen Harper Conservative defeat just hours before appeared to be coming true.

Burton-May, 24, had accompanied her mother much of the campaign, even though she was nominated to run for the Greens in the Quebec riding of Berthier-Maskinonge.

“The reality is a lot of the Liberal platform are things Elizabeth has been saying all along,” said Olsen. “I think Elizabeth will have a good relationship with Mr. Trudeau.”

He said May raised the issue of budget-deficits during the election’s first leaders’ debate, and days later Trudeau’s Liberals announced the party would run deficits to rebuild Canada’s infrastructure.

May said the Greens decided to target 15 ridings where they had support in Atlantic Canada, Quebec, Ontario and B.C.

She said she believed Vancouver Island would deliver Green votes, particularly in Victoria.

“This is always a place that is very committed to environmental values,” said May.

But she almost couldn’t vote Monday when she forgot to bring proper identification to her Sidney, B.C., polling station.

May said she carried a green leather purse to match her party’s political colour, but her correct identification was in another purse in her campaign van.

She said she ran back to the van and rummaged through her second purse to find the identification that matched her current address with her election-registration address.

“I was so embarrassed,” said May. “I held up the whole line.”

May then voted in the riding she won in the 2011 election and is expected to win again.

The leader spent the final days of the campaign driving the length of Vancouver Island, where the party has visions of capturing up to four of seven available seats, including May’s riding.

Vancouver Island is a traditional hotbed of Green-leaning voters and often votes in blocks against the national tide, also of benefit to the Greens.

Roberts’s chances at victory took a leap forward when Liberal candidate Cheryl Thomas withdrew on Sept. 30 and apologized for controversial comments she posted to Facebook in the past about conflict in the Middle East.

Thomas’s withdrawal came too late for the Liberals to replace her, leaving Roberts as the main contender.

The Greens spent the final weeks questioning Rankin’s environmental record, as both May and Roberts said he worked against Canada on an environmental case for a United States company.

May has been a loud but lone voice in the House of Commons since her 2011 breakthrough win and after failed attempts in Atlantic Canada.
Ontario’s Bruce Hyer crossed the floor from the New Democrats to join the Greens and expand the caucus to two members but he is in a fight for his Thunder Bay area seat.

May started the campaign pledging to erase university and college tuition fees, expand transit and stop the use of fossil fuels by 2050.

Her message lost steam in the final days, as several high-profile West Coast environmental leaders urged strategic voting to defeat of the Conservatives.