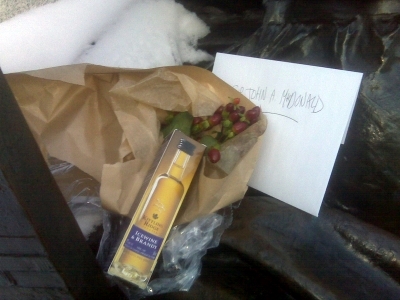 Unfortunately, there were no wee bottles of scotch available.

Who says we don’t appreciate our former prime ministers?

His eight majority record would seem to be safe for the moment.

Sadly, ITQ wasn’t able to make it to Kingston – or British Columbia –  to take part in this year’s celebrations, so she stopped by his statue on Parliament Hill instead. (If you squint at the second photo for long enough, you should be able to spot her gazing pensively upwards from the base of the statue, after being persuaded that it would be foolhardy to attempt the climb.)

Happy Sir John A. Day, everyone!