Paul Wells: The country doesn't need Ottawa to lead it on most days, and it needn't indulge Ottawa's desire to pretend it's leading us all on Canada Day 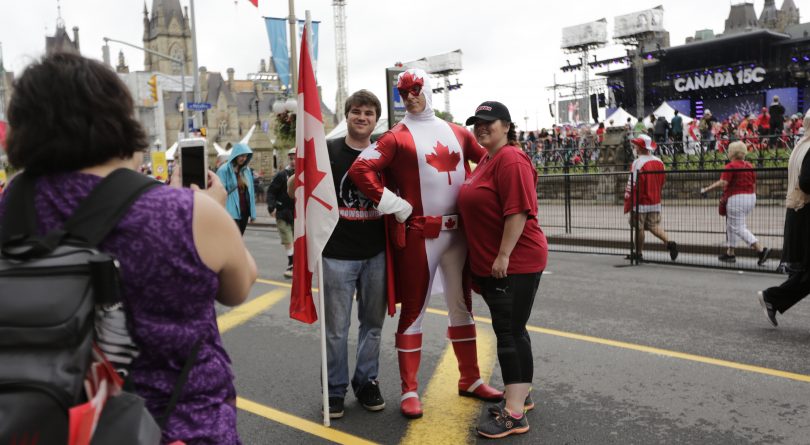 Attendees stand for a photograph with a performer dressed as "Captain Canada" during the Canada Day event on Parliament Hill in Ottawa, Ontario, Canada, on Saturday, July 1, 2017. The 150th anniversary of Canada, promoted as Canada 150, marks the sesquicentennial anniversary of the Canadian Confederation. Photographer: David Kawai/Bloomberg via Getty Images

[Editor’s Note: I wrote this before news broke that Justin Trudeau won’t be on Parliament Hill this Canada Day. Maybe I’m not as far ahead of my time as I thought —pw]

There’s a hidden assumption in news that Canada Day on Parliament Hill this year will be another day of lineups and security checks, and that this will probably never change. The assumption is that a centralized Canada Day celebration in a smallish park in the middle of Canada’s sixth-largest urban centre makes any sense.

I mean no offence to the hundreds of public servants who have worked hard, with glad and patriotic hearts, to ensure that this year’s celebration will be less of a fiasco than last year’s, when the number of participants who counted themselves dissatisfied with the proceedings increased elevenfold from a previous survey two years earlier.

And I am full of gratitude for the lineup of real musical talent, which this year includes Arkells, Lights and Iskwé, who have agreed to take turns playing a song or two each during the televised midday show from the big stage in front of Parliament’s Centre Block—often at the expense of showcase concerts they could have played somewhere else, with their own equipment and lighting, for audiences that already know and like them.

READ MORE: The splendor and the slop of Canada Day

But after last year’s schmozzle, it was possible to hope that somebody would pause to re-examine the whole model of a centralized Ottawa Canada Day. Or I thought it was. Unfortunately, since  the “somebody” would have had to be “the government of Canada,” there has been no re-examining.

On the face of it, it doesn’t make sense that in a country shaped like Canada, with most of its population smeared like 5,000 km of peanut butter along the Canada-U.S. border, the national celebration should be concentrated on any single point along that line. On no other day in the calendar do Canadians attempt to concentrate their commemorations in similar manner. Christmas is everywhere. New Year’s Eve belongs to St. John’s just a tiny bit more, by dint of time zones, than it does to Montreal, Sudbury or whatever godforsaken house party you stupidly agreed to go to because you couldn’t scrounge a better invite.

Canada Day wasn’t always associated with awkward attempts to invite voters by the tens of thousands to the incumbent prime minister’s lawn party. (And yes, I know it wasn’t even called Canada Day until the 1980s, but that’s an argument for another day. Let’s just pretend.) For most of the period after Confederation, the national holiday was understood to be wherever the nation’s sons and daughters found themselves. I grew up absolutely loving Canada Day in Sarnia, where it was an annual chance to taste ethnic food that wasn’t exactly easy to find during the rest of the year, and later became a chance to catch up with high-school classmates, especially the ones I had some faint hope of dating, between June and September.

RELATED: A cross-country singalong of the national anthem on Canada Day

To refresh our memories about how Canada Day on Parliament Hill came to be, it’s handy to consult the writings of Matthew Hayday, a Guelph University historian who’s studied the way public ceremony advances a society’s idea of itself and its leaders’ political ideas. This article summarizes some of his research.

It’s no great surprise that Hayday pegs the first modern Dominion Day celebration on Parliament Hill to John Diefenbaker, in 1958. Conservatives are often keenly aware of the way their own ideas haven’t been well-represented in Liberal governments’ symbol sets; the temptation to recalibrate is often strong when they get to power. Diefenbaker’s ceremony included a speech from the Governor General (links to the British Crown) and military bands (the military!), themes that would be dear to another Conservative prime minister half a century later.

Lester Pearson worked in the ’60s to top Diefenbaker’s model. Canada’s Centennial was approaching, so in cahoots with the CBC, Pearson made the show bigger and more lavish every year—until 1967. Then the Ottawa ceremony declined. “By 1976, all funding had been cancelled, and the only celebration of Dominion Day in Ottawa that year was the presentation of citizenship certificates.”

Then the Parti Québécois was elected in Quebec. The following July, everyone tried to pretend that the sudden presence of Anne Murray, Buffy Sainte-Marie and Bruce Cockburn on Parliament Hill wasn’t a blatant attempt to rebut Quebec separatism in song. Dominion Day was a bigger annual event than ever before—until 1981, when the defeat of the previous year’s sovereignty-association referendum led to another collapse in Dominion Day budgets.

Flash forward—and here I depart Hayday’s research and work from personal memory—to Stephen Harper, who had a Diefenbakeresque desire to put on a public party that could both draw a crowd and play on themes that were congenial to Conservatives’ ideas of Canada. And then to Justin Trudeau.

At the very first Liberal cabinet retreat after the election, I’m told, one of the governing priorities the assembled rookie ministers discussed was the Canada 150 celebrations. Strategic objectives, as always, included containing Quebec separatism. Themes included reconciliation with Indigenous people in Canada, diversity and youth. Probably there was some intent to commemorate the history of Canada too, but, well, there was a lot going on. Eventually half of U2 showed up because… I forget.

This whirlwind tour should be enough to remind us that Canada Day is only ever a big deal on Parliament Hill when a federal government has a bright idea. And that the increasingly overt partnership with the CBC—remember Evan Solomon bringing his guitar along for the festivities a few years ago? Remember Peter Mansbridge back-dating his retirement until immediately after Canada Day 2017?—is probably innocuous, but shouldn’t be taken by anyone as an immutable element of the national cultural landscape.

We celebrate Canada Day on Parliament Hill—those of us who do—because the prime minister has his office across the street from Parliament Hill, and because the national broadcaster has a strategic interest in associating itself closely with the government’s best days and with the very identity of the nation. Neither of these is a reason to stop pouring millions into an Ottawa Canada Day, but neither is a justification for such an odd annual spectacle either.

If security is such a hassle, just throttle back. Canada Day won’t go away if public-service workers stop spending most of June erecting a mammoth stage on the lawn in front of the Centre Block. Festivities will keep happening, in towns and villages across the country. The country doesn’t need Ottawa to lead it on most days, and it needn’t indulge Ottawa’s desire to pretend it’s leading us all on Canada Day. The country is more than its leaders’ latest talking points. Its holiday doesn’t need to be a state-reinforced marketing campaign for those points. It can just be a family day, a community day, some quiet time.