Will Trudeau live-tweet the debate? What will insiders believe? Only time will tell this election season, Scott Feschuk writes. 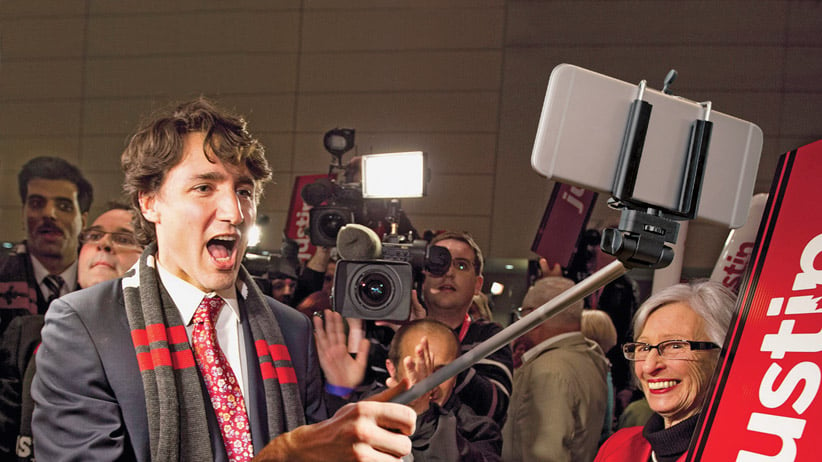 Sure, you’re caught in the clutches of another hard winter. You’re batting 0-for-6 on your New Year’s resolutions. And you continue to live in a world in which Starbucks has the stones to describe some of its mass-produced, sandwich-shaped substances as “artisanal.”

But look on the bright side. We are entering one of the most enjoyable periods on the federal political calendar: Happy election speculation season, everyone! We have arrived at that magical quadrennial juncture when our leading pundits survey the trends, listen to the whispers, weigh the balance of evidence—and completely guess at what’s going to happen, usually while making frequent use of the phrase, “On the other hand . . . ”

Will Stephen Harper call a snap election in the spring? Will he stick to the scheduled date in October? Will he delay the vote until 2016 for lapping-based reasons? It’s important that we get literally dozens of stories telling us: maybe!

What’s the key to a great election speculation story? Well, you can never have too much vague. But a wholesale lack of useful information is only a starting point. You’re definitely going to want to include several unnamed individuals making noncommittal statements about theoretical eventualities. (Readers and viewers love hearing from such reliable sources as Some Say, Insiders Believe and—my personal favourite—One Observer Suggests.)

It’s also important to make each possible outcome sound both plausible and unlikely, for, as a media personality, this is the safest way to later claim you totally called it.

Would an example be helpful? CBC.ca recently published a piece about election timing that begins: “Hold your breath. Or rather, don’t.” Wow, only six words into the story and already we’ve visited both sides of the fence. Wrap it up with an “only time will tell” and, boom! You’ve earned an early lunch.

Once you realize how easy it is to speculate about election timing, it’s difficult not to wonder: Why don’t pundits and panellists speculate about way more stuff? Why restrict one’s fact-free musings to election timing? How about a three-minute news segment on whether the Prime Minister is going to grow a moustache in 2015? On one hand, he probably won’t. But on the other hand, he possibly will! The only thing that’s for certain is that nothing is for certain. Back to you, Peter.

Whenever the next election comes, there is one aspect of the campaign that will require no speculation at all—for it is a lock, a done deal, or, as the French say, un beaucoup de duh. (Relevant: I do not speak French.) People of Canada, it is my duty to report that the next federal vote is destined to go down as . . .  the Selfie Election. (The Selfielection?)

It’s unavoidable, folks. This selfie thing is now completely out of hand.

I was in New York over the holidays and can report epidemic use of a device known as a Selfie Stick—a collapsible pole that holds your smartphone at a distance, allowing you to squeeze into your Instagram shot more people, scenery and unchecked self-regard than ever thought possible.

Dozens of these so-called “narcissisticks” could be spotted in Times Square and around the Rockefeller Center tree. The sidewalks were crowded. Everyone was getting jostled. Yet the selfie-takers were undeterred. They were committed to having a terrible time so they could produce an image that would convince others they were having a great time.

No leader or candidate will be able to resist the demand for campaign selfies. We are doomed to endure endless TV footage of politicians taking photographs of themselves with voters in an attempt to show they are just like Ellen at the Oscars.

Prepare yourself for five long weeks of selfies from the campaign trail featuring:

1. Justin Trudeau standing amid throngs of young admirers.
2. Thomas Mulcair standing amid a reasonable number of people who probably know who he is.
3. Stephen Harper barely tolerating other people’s children in all 10 provinces.

For the record, I’d wager there’s a one-in-five chance that Trudeau pulls out an iPhone during the leaders’ debate and live-tweets a shot of himself holding up a sign that reads: #killingit. The media will have a field day: How will this shocking selfie affect Liberal chances? Let’s speculate!