Harjit Sajjan on refugee resettlement: 'A great message to ISIS' 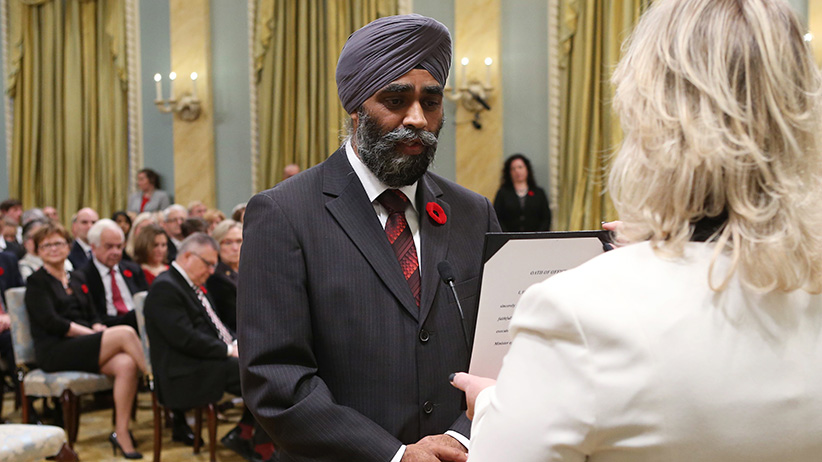 HALIFAX — The Liberal government’s plan to resettle thousands of Syrian refugees by the new year is one way that Canada is contributing to the fight against the Islamic State, Defence Minister Harjit Sajjan said Friday.

“This crisis is not just about a humanitarian project,” Sajjan said at the official opening of the International Security Forum in Halifax.

“This also sends a great message to ISIS that you might create this environment for us, but we will not let you take advantage of this. By doing our part for this, we are actually hitting ISIS in a different way as well.”

Sajjan was responding to questions about a new poll suggesting just over half of Canadians didn’t support the plan to resettle 25,000 refugees by the end of this year.

A Forum Research poll cited by the Toronto Star found 51 per cent of respondents disagreed with the plan and nearly 60 per cent agreed when asked if there is a security risk to resettling refugees in Canada.

The survey of 909 adults was conducted by interactive voice response Tuesday. Results are considered accurate plus or minus three percentage points, 19 times out of 20.

A government document obtained by The Canadian Press pegs the cost of the resettlement plan at $1.2 billion over the next six years, suggesting $876.7 million would be needed in 2015-2016 alone.

Sajjan said the federal government will be mindful of the recent terrorist attacks in Paris and Beirut when screening applicants and he said the most vulnerable refugees will be selected for resettlement.

“Just the security dimension, 25,000 is a small number when they’ve already been pre-screened by the United Nations and will be screened by our own security agencies,” Stein told a panel discussion later in the day.

Gen. Jonathan Vance, Canada’s chief of defence staff, told the panel that attacks in Paris opened the world’s eyes to the strength of the Islamic State.

“I think the rallying cry has occurred,” he said. “Paris certainly reminded people that this is an active enemy that’s trying to win.”

Sajjan told the panel the key to defeating the Islamic State will be deterring others from joining the group.

“My humble suggestion is lets make the message ineffective,” he said. “How do we demonize the message? That’s the real key.”

Sajjan said Canada’s role in training local fighters in Iraq will have a meaningful impact on the area.

As for the refugees, the minister said many of the newcomers will bring much-needed skills that will benefit Canada.

“They’re not fleeing poverty, they’re fleeing war,” he said earlier in the day. “These people are coming with phenomenal skill sets, and the people that do resettle in this area are going to be contributing to our economy.”

Federal officials are currently talking with the provincial premiers about the logistics of taking in thousands of refugees. Sajjan acknowledged the hospitality and compassion of Canadians who have offered to open their homes to refugees, calling it “second-to-none.”