He didn't emerge in support of abolishing the Senate—but the Prime Minister's plans are still worthy of scrutiny. John Geddes explains 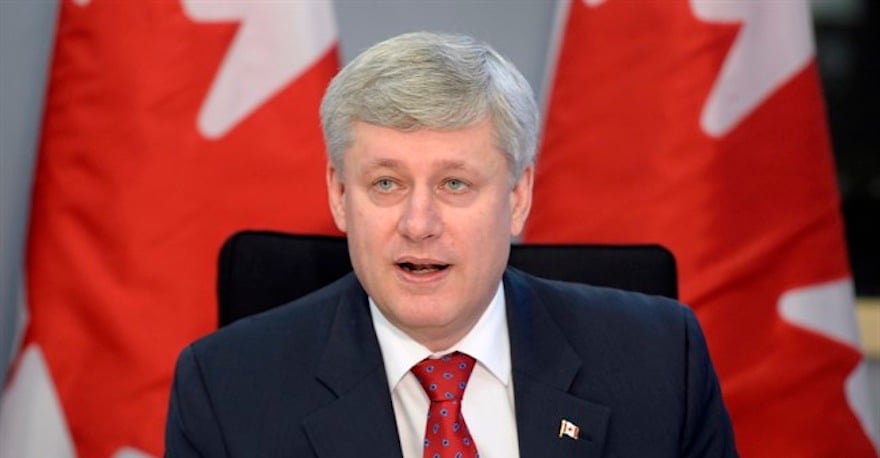 Prime Minister Stephen Harper didn’t come out in favour of scrapping the Senate today, as advance speculation predicted, but his comments at a joint news conference with Saskatchewan Premier Brad Wall were worth paying close attention to anyway.

Harper’s remarks had three key parts: one meant to frame a revised Conservative stance on the Senate; the second to give Tories a way to defend themselves against the NDP’s abolition policy (although he didn’t say so explicitly); and the third to cast the Liberal reform position in a bad light (again, of course, without the PM quite saying so).

1. Adjusting his Conservative position: “There are now 22 vacancies in the Senate and, let me be clear, it will be our policy to formalize that there will be a moratorium on further Senate appointments.”

By vowing not to name any more senators, Harper aims to distance himself from the upper chamber, and avoid further reminding people of his undeniably embarrassing record of 59 appointments, which includes the suspended trio of Mike Duffy, Pamela Wallin and Patrick Brazeau.

But Harper also contends that refusing to replenish the Senate’s supply of patronage appointees as the old ones bow out will somehow prod the provinces into realizing that something must be done to fix the place, which brings us to his next point.

2. Defending himself against NDP Leader Thomas Mulcair’s abolition position: “It will force the provinces over time—who, as you know, have been resistant to any reforms in most cases—to either come up with a plan of comprehensive reform or to conclude that the only way to deal with the status quo is abolition.”

It is by no means clear how letting Senate seats sit empty will put any real pressure on the provinces. Even if they did take notice, as Harper assumes they will, it’s not obvious why the premiers would come closer to a consensus on reform, or agree amongst themselves on the need for abolition.

Still, Harper’s position does give him something new to say when Mulcair pitches abolition as the answer. Rather than having to explain an inevitably more complex case for reform, Harper can now fire back that he would accept abolition, too—if that’s what the provinces decide. And that sets Liberal Leader Justin Trudeau apart as the only leader not talking abolition, which brings us to Harper’s third point today.

3. Casting the Liberal position as counterproductive: “The government is not going to take any actions going forward that would do anything to further entrench that unelected, unaccountable Senate.”

This was perhaps the strangest line in Harper’s comments today. After all, who has suggested that he might do something to further entrench the Senate? Nobody, of course. But Tories will argue that Trudeau’s policy—to create a new non-partisan process for appointing respectable senators—would do just that.

Early last year, you’ll recall, Trudeau took the dramatic step of kicking the Liberal senators, 32 at the time, out of his party’s caucus. He pledges, if he wins this fall’s election, to set up “an independent-minded, non-partisan group” to draft lists of promising individuals from which the prime minister would appoint new senators.

Trudeau’s position has the major advantage of not requiring difficult constitutional negotiations with the provinces (a point the Liberal leader repeated today). It looks as though Harper’s tack will be to argue that Trudeau’s plan, by making senators more acceptably non-partisan, would entrench a flawed institution.

So the Prime Minister’s comments today try to do three things: Distance Conservatives from the tainted Senate, make Mulcair look less distinctive in his pro-abolition position, and suggest that Trudeau’s way of making the Senate better would only make it more permanent.

It all adds up, not to a bold new policy, but to a strategic recalibration.