Harper didn’t have to run on a culture war 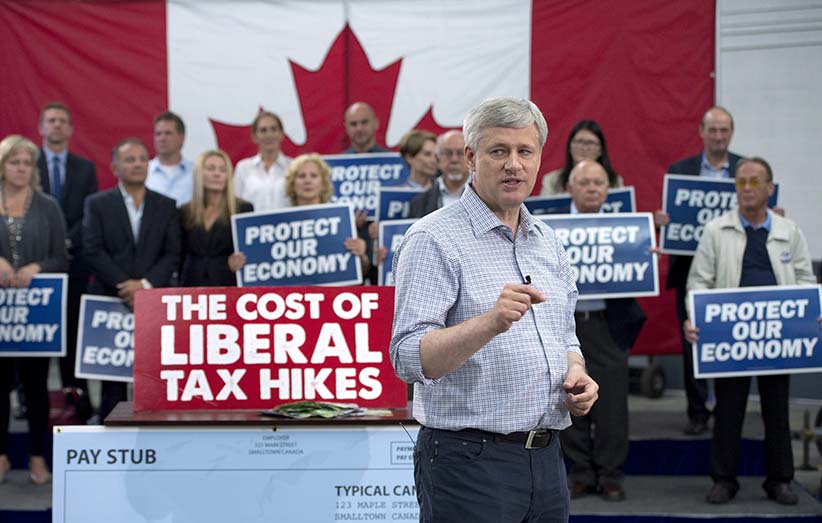 Those chilling words hung in the air as a small group of Conservatives gazed up at the grizzled campaign veteran, Doug Finley. This was just a small nomination race back in the late 1990s, but Finley—eventually Sen. Finley—was honing a strategy he would go on to use as campaign director for the Conservative party and as one of the chief architects of Stephen Harper’s rise to power.

Finley’s morbid point was to illustrate how they planned to destroy their opponent before the race even began. Frame the opposition early, then suffocate them—metaphorically, of course. According to a Conservative who was in the room, this has always been the core strategy of Conservative campaigns. “We beat them before they even know they’re in a fight.”

Campaigns are all about the quick and the dead. For a decade, the Conservatives have been quick, the others politically dead. It’s not for the squeamish. Finley died in 2013, but the legacy of his work lives in every campaign.

Michael Ignatieff: “Just visiting.” Dead. Stéphane Dion: “Not a leader.” Dead. Justin Trudeau: “Not ready.” Well . . . hang on a moment. That one doesn’t seem to be working as well. With days left to go, Trudeau is very much . . . not dead. What’s changed?

The answer is Stephen Harper himself. Instead of defining his opponents, he’s defined himself, and he might not be able to escape his own trap. Harper has gone from the outsider, the man who would clean up Ottawa—yes, that Stephen Harper really was the face of long overdue change—to the man who fears change. Who fears everything.

Fear of barbaric acts. Fear of powerful pot. Fear of deficits, even though Harper used deficits so strategically to stimulate the economy during the Great Recession. It’s remarkable: He’s actually running hard against some of his most lauded and effective economic policies. That’s a tough rebrand.

But it’s fear of the niqab that has been most defining, and most destructive, especially from a party that has done more than any other to reach out to immigrant communities. Conservatives are rightly proud of the work Jason Kenney has done with so-called “ethnic” voters. It has been crucial to their victories in areas such as the 905 around Toronto.

But when the head of the Islamic Supreme Council of Canada, Calgary imam Syed Soharwardy—a man who has worked closely with the RCMP to combat Islamist radicalism and who has been threatened by ISIS—says he believes Harper has actively targeted Muslims for political gain, you have to stop and listen. “It’s hate-mongering,” Soharwardy said, describing the niqab debate. Rabia Khedr, the spokesperson for the Federation of Muslim Women, told me she feels “unwanted” in her own country. These comments cannot be ignored. It’s one thing to have genuine policy disagreements. Good, we need that. It’s another to have serious people believing their ethnic group is being targeted for political gain.

Fear-mongering is par for the campaign course—all parties engage in it—but the culture war over the niqab has whipsawed the conversation from policies over to values. I’ve heard all the defences of the position: It’s popular in Quebec; most Canadians agree with it. But is that the point? Populism may be about strategy, but isn’t governing about responsibility?

I’m not sure the values debate even makes strategic sense for the Conservatives. It certainly isn’t where they started. Early in the campaign, a senior Conservative outlined the party’s original plan: lots of detailed, hard-core policy debates about substantial issues to show how much more competent Harper is than Trudeau. That didn’t work. Trudeau fought Harper to a draw on issues of substance, exceeding the low expectations the Conservatives set. Enter the values debate.

The trouble for Harper is, Trudeau has always wanted this campaign to be about values, trust and change. If Trudeau had his choice of weapons in a fight against Harper, he’d take charisma over calculators every day. By making the election about values, Harper has defined himself in the negative, opening the door for Trudeau to talk about what Conservatives dismiss as all that “hopey, changey” stuff.

Harper is fundamentally an incremental radical. Slowly, over a decade, he’s bled the capacity of the central government to interfere in the daily lives of the citizens and, in so doing, he’s remade the country in a more conservative hue. It’s been a winning formula, as Paul Wells wrote brilliantly in his last book. Harper has a record of substance to run on. He has a real philosophy of government. He didn’t have to resort to a culture war.

Of course, it’s lurked in the background. Harper’s success has always been fuelled by a narrative of victimization: that the West is put down by Laurentian elites, that the media are fundamentally against his mission. How ingrained is it? Just last week, a senior minister I spoke with blamed a pollster for releasing data showing the Conservatives in the lead. “They wheel out a push poll to tell non-CPC voters to unite/work harder.” Really? Talk about not taking being able to take a compliment. It sounded as though they’re almost . . . afraid to win.

Sometimes the stories we tell define others. But sometimes those stories—especially the nasty ones—start to define us. And that could be Stephen Harper’s biggest fear of all.