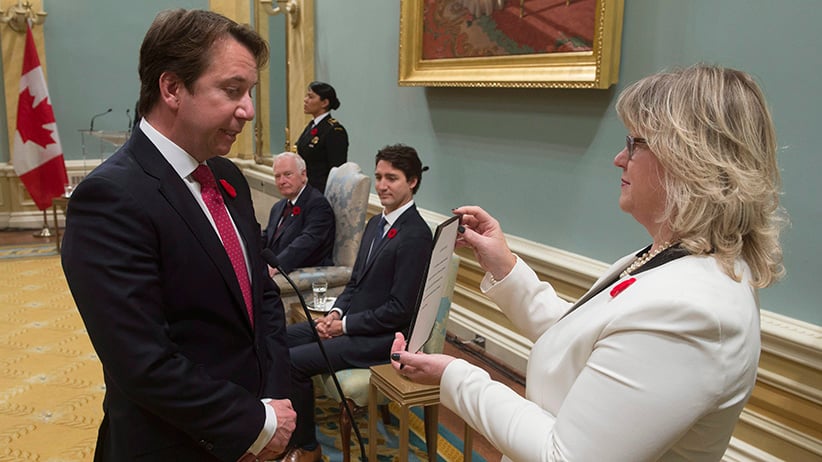 Governor General David Johnston and Prime Minister Justin Trudeau look on as Scott Brison is sworn in as President of the Treasury Board during ceremonies at Rideau Hall Wednesday Nov.4, 2015 in Ottawa. THE CANADIAN PRESS/Adrian Wyld

OTTAWA – The new Trudeau government is suggesting it may have to make adjustments to fulfil its budgetary election vows after the Conservatives left only a few fiscal scraps behind.

The Liberals had pledged to keep budget deficits at no more than $10 billion a year over the next three years and still balance the books before the next election.

However, a report this week by the federal budget watchdog warned that grimmer economic conditions could drive the country into deeper deficits starting next year.

Treasury Board President Scott Brison was asked Thursday whether, in light of the weakened outlook, future deficits exceeding $10 billion were out of the question.

“We will deal with, first of all, addressing the fact that we inherited from the previous government a bare cupboard,” Brison told reporters after a cabinet meeting in Ottawa, without giving specifics on how the government plans to deal with the situation.

“But we will move forward with a progressive agenda in a very fiscally responsible way.”

Brison added that the Conservatives based their $1.4-billion, 2015-16 surplus projection — from April’s federal budget — on one-time asset sales and optimistic growth forecasts.

“Growth has slowed since then — there’s about a one-point (difference) from the growth numbers that were projected at that time and what is actually materializing,” he said of the spring budget.

“It’s not exactly a surprise to us that the Harper government didn’t leave a lot of fiscal capacity.”

The Liberals won a majority mandate last month after promising big spending plans for projects like infrastructure, which the party says will stimulate the economy and create jobs.

The parliamentary budget office, which released the report Tuesday, updated its fiscal numbers after downgrading its outlook for the economy. It blamed the gloomier economic forecast on deteriorating growth, low commodity prices and shrinking revenues.

After the report’s revelations were made public, Finance Minister Bill Morneau insisted it was premature for any decision on whether the Liberal government would modify its campaign commitments because of lowered economic expectations.

Morneau also promised to release a fiscal and economic update for the public by Christmas.