Stephen Harper: 'Our party's journey is only beginning' 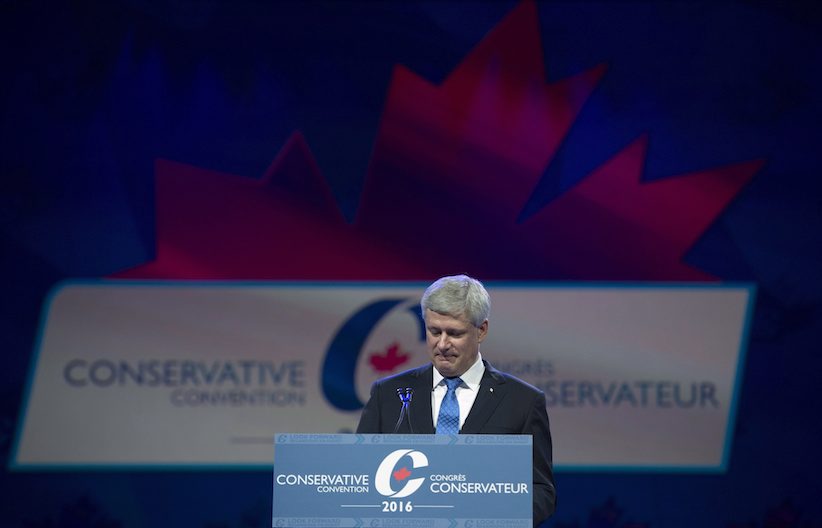 VANCOUVER — The Conservative party remains strong and united even in the face of last fall’s election defeat, former prime minister Stephen Harper said Thursday in his first public remarks since stepping down on election night.

Harper addressed about 2,000 delegates at the party’s policy convention in Vancouver, thanking his family, his staff, his caucus and party loyalists for the work they’ve done building the modern day Conservative movement.

“We have a proud record, but the past is no place to linger,” Harper said, according to a prepared text of his remarks.

“Now is the time to look forward. Our party’s journey is only beginning.”

Harper paid specific tribute to the party’s gains in Quebec, having elected a record number of MPs, something of which he said he’s personally very proud.

“Our party now has a solid base in the heart of the great Quebecois nation,” he said in a nod to the party’s gains specifically in Quebec City, where they won eight of ten seats in the area.

The party says there are more delegates from Quebec registered for this convention than similar events in year’s past and there’s already one leadership contender from that province as well, former Tory cabinet minister Maxime Bernier.

Harper said the party must be prepared to unite around whomever is chosen as the next leader.

“In 2019, perhaps more than we understand even now, our country will need a strong, united Conservative party ready to govern,” he said.

“A party driven by hope, by hard work and by higher purpose that Canada can be and must always be the best country in the world.”

Harper did not address what’s in store for him next, saying only that he is enjoying not being centre stage any more.

The Tories are gathered in Vancouver for a three-day review of their policies and constitution and will select a new leader in 2017.

In addition to Bernier, Kellie Leitch and Michael Chong are the other two people formally registered to run and all are already working the delegates at the convention, alongside others considering throwing their hats in the ring.

Former cabinet minister Peter MacKay is in attendance, and TV personality and businessman Kevin O’Leary is expected in the crowd as well.