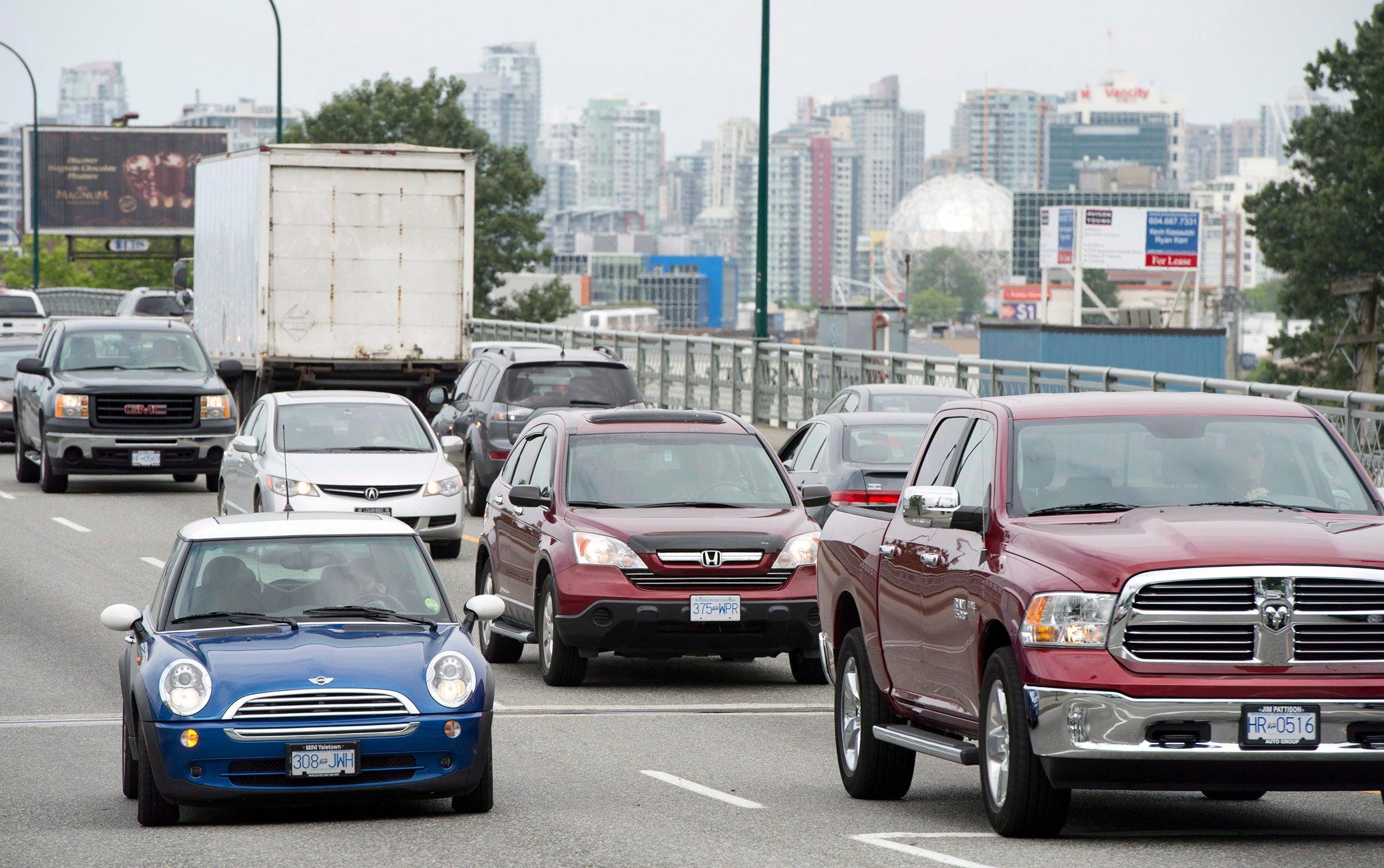 Traffic in Vancouver, B.C., in 2014. A study found that the city has the worst traffic in North America. (Jonathan Hayward/The Canadian Press)

He’s expected to announce that a Conservative government would help fund light rail in Surrey, B.C., if the Tories are re-elected.

Related reading: Paul Wells on the road with the Prime Minister

The city is home to five federal ridings, each with its own particular political dynamic but all with something in common — a need for better transit for the thousands of people who commute into Vancouver and other area cities each day.

And as Harper seeks to hold on to the Conservative seats in B.C.’s Lower Mainland, getting those voters onside is key.

In Surrey the current mayor staked her electoral fortunes on getting a light rail transit system built but a recent referendum on instituting a new levy to pay for it and other transportation improvements failed.

She remains committed but the project needs federal cash to survive — and that’s what Harper will be promising to bring as he stands with the Tory candidate for the riding of South Surrey-White Rock, the city’s previous mayor Dianne Watts.

She’s considered a shoe-in to win the riding; though elements of it are different thanks to redistribution, it’s been a Conservative safe bet for years.

Redistribution created six new seats altogether in B.C. for this election, five in the Lower Mainland and one on the Island, bringing the total number of MPs for the province to 42.

At a rally in Abbotsford, B.C., on Wednesday night — the largest event of the week with an estimated 700 people in attendance — Harper accused his opponents of fighting against the creation of those new seats.

“Those federal parties are no friends to this part of the country, no friends to Western Canada,” he said. “Thanks to your government and Conservative MPs, British Columbia may now well choose who will form the national government in this country.”

Harper also accused previous provincial NDP governments of destroying the B.C. economy in the 1990s, and maintained that if elected, their federal cousins will do the same across the country.

It’s the NDP who largely pose the biggest threat to the Conservatives in B.C. and in Surrey in particular.

Second quarter statistics from the RCMP showed violent crime up 34 per cent since last year and the Conservatives have been criticized for taking too long to increase policing resources in the area. Conservative Nina Grewal is facing a challenge in Surrey; though she’s held the riding since 2004, the NDP posted major gains there in the 2011 campaign and this time they are fielding a former RCMP officer.

That party feels so strongly about Garry Begg’s chances that on his recent visit to the city, leader Tom Mulcair all but guaranteed Begg a spot in an NDP government cabinet.

Forty-nine per cent of Surrey’s population is made up of people whose mother tongue is something other than English or French. While the Conservatives have made major changes to immigration programs, some of them aren’t sitting well, especially long waits for family reunification and recent changes to citizenship laws, including a provision that would allow the government to strip dual citizens of their Canadian citizenship should they be convicted of a crime.

Harper’s event Wednesday morning is at a warehouse for a chain of local speciality stores, where the majority of the customers are Indo Canadian and the owner has been talking in recent months about expanding into selling Canadian products to India.

The community’s ties to India were highlighted earlier this year when the country’s prime minister visited Surrey as part of his Canadian tour.