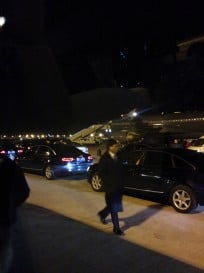 The plane carrying Stephen Harper, a handful of cabinet ministers and backbenchers, and the bedraggled media had barely taken off from a refueling stop in Anchorage when we received the “tidbit” one of the PM’s men had promised: Mark Rowswell, the Canadian who is famous in Canada for being famous in China, has been named Canada’s Goodwill Ambassador to China. This is a big change of pace for Rowswell, who as you know was, until today, an emissary of fear and suspicion. Just kidding.

The PM’s flight landed an hour ago at Beijing airport. Reporters were hustled into little vans, which hurried downtown with speed I found surprising until I realized the police had blocked the road we were on to all traffic but our own. Spotted in the vicinity of our hotel: Versace, Subway, 7-11, and the Globe’s China correspondent, Mark MacKinnon.

It’s Tuesday night here, and the agenda includes sleep. Wednesday begins around the time you’ll be eating dinner, and the Prime Minister, whom none of us have yet seen, has a Canadian Tourism Commission event in the morning, followed by a one-hour meeting with Chinese Premier Wen Jiabao.