Harper promises to ban travel to regions controlled by terror groups, but Trudeau says this idea is meant to distract from the Conservatives' poor economic record 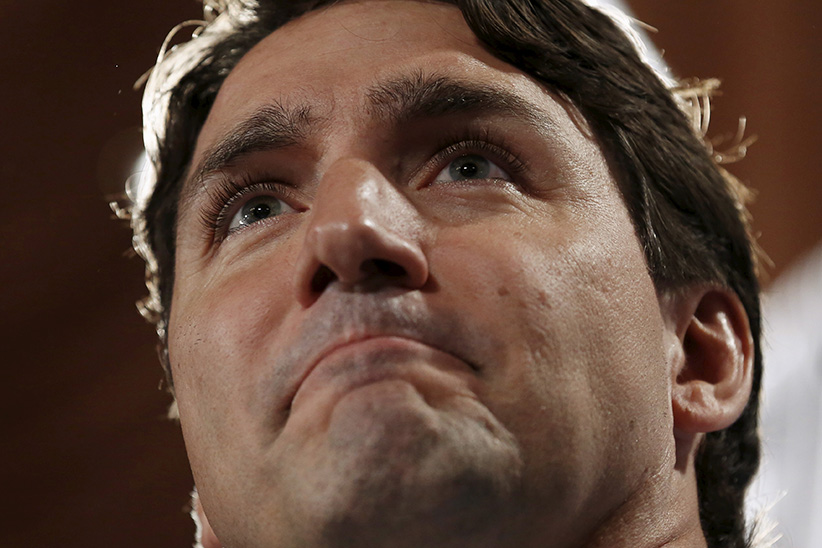 OTTAWA – Stephen Harper ramped up the anti-terror talk Monday, defending Canada’s role in the fight against insurgents in the Middle East and slamming his two main rivals for what he considers their misguided opposition to military action.

With the trial of disgraced senator Mike Duffy set to make its dramatic return to the political stage this week, the Conservative leader is escalating the rhetoric as he depicts his party as the only one capable of keeping Canadians safe.

Harper strongly defended the use of Canadian warplanes against the Islamic State of Iraq and the Levant — also known as ISIL and ISIS — as he promised Canada would take in more refugees from the region over the next several years.

Offering safe haven to refugees is not enough, the prime minister said during a campaign stop in Markham, Ont.

“ISIS, left to its own devices, will create millions, tens of millions of refugees and victims on a monthly basis,” he said.

“That’s why the international community intervened … President Obama and our allies felt we had no choice. We were witnessing mass slaughter at an alarming, lightning pace that was sweeping across the region.”

Harper brushed off the criticisms of NDP Leader Tom Mulcair and Liberal Leader Justin Trudeau, who reject military action and have urged that Canada stick to providing humanitarian aid.

“If your policy is humanitarian assistance without military support, all you’re doing is dropping aid on dead people,” Harper said.

“That’s not acceptable. We’re a country that can contribute militarily and in a humanitarian sense, and we are doing both.”

Harper says a re-elected Conservative government would bring in 10,000 additional religious minority refugees from Syria and Iraq, targeting refugees in the region who face persecution or the threat of extremist violence.

On Sunday, the prime minister raised eyebrows with a promise to ban travel to regions controlled by terror groups, saying such travel is “not a human right”— a comment he repeated Monday.

Trudeau dismissed that as political posturing.

At an early-morning event in Montreal, Trudeau called the travel ban idea as little more than a distraction from the Conservatives’ dismal economic record.

Mulcair, meanwhile, was in Toronto for the launch of his new autobiography, “Strength of Conviction,” before heading to Montreal. The event was briefly interrupted by protesters pressing the NDP leader for a position on the Energy East pipeline.

The small group was quickly escorted out the room as they yelled “Stop Energy East” and asked if Mulcair would say no to the project if it’s incompatible with national action on climate change.

Mulcair, who did not speak to journalists at the event, responded briefly by saying, “Of course we will,” adding that’s why a new system is necessary.

The New Democrats were also expected to announce later in the day which of the proposed leaders’ debates Mulcair would be participating in. The party has already said it won’t take part in any debates that don’t include the prime minister.

Harper also made a multimillion-dollar pledge Monday to fund groups that are trying to protect places of worship and religious artifacts targeted by ISIL.

The Conservatives want to spend $9 million over three years on the project through a fund overseen by the Office of Religious Freedom that the Conservatives created in 2013.

Earlier this year, the Conservative government made a similar commitment to resettle 10,000 refugees from the war-torn Middle East, but has steadfastly refused to say how many people have actually been allowed in thus far.

The prime minister said his latest refugee target would give priority to religious minorities threatened with persecution of extremist violence.

“A re-elected Conservative government will continue to champion religious freedom and the protection of religious minorities as a pillar of Canadian foreign policy,” Harper said.