Harper talks up the Conservative grip on immigrant votes

"The big transformation of politics in our country" 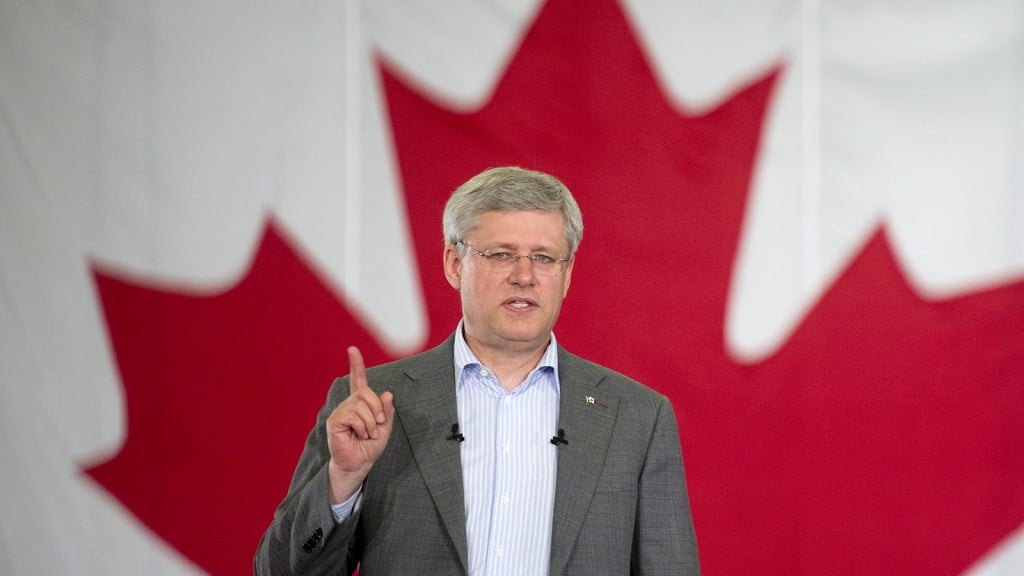 Prime Minister Stephen Harper made sweeping claims today about how the shift of immigrant votes to his Conservative party over the past few elections changed Canadian politics.

Interviewed on stage in New York by the editor-in-chief of the Wall Street Journal, Harper recalled how his party was in the same dispiriting position 15 years ago as conservatives in other countries, capturing only “a very small share” of the immigrant vote.

“Today we win most of those communities and we are the majority party in so-called ‘cultural communities’ writ large,” he said, adding later: “So that’s been the big transformation of politics in our country.”

This boast won’t come as a surprise to even casual watchers of the federal scene, who have heard all the stories about Employment Minister Jason Kenney’s tireless efforts to court new Canadians. But the conventional wisdom that this outreach effort has been a transformative success—the point reinforced so vigorously by the Prime Minister today—isn’t as self-evident as it might sometimes seem.

It’s true that according to Ipos Reid’s exit polls the Conservatives did somewhat better in the 2011 election among voters born outside Canada—42 per cent support—than voters born in Canada—37 per cent.

However, as Tom Flanagan, Harper’s onetime strategist, pointed out a few years ago in an article in Policy Options on the nature of the new Tory coalition, dig beneath that top-line measure of success among immigrants, and the numbers get more complicated.  For instance, Flanagan noted that Harper’s Conservatives won just 31 per cent of visible minority voters and only 12 per cent of Muslims.

So Conservative inroads are not uniformly deep among immigrants. A key point to keep in mind is that the party tends to do much better among those who have lived in Canada more than a decade ago than among more recent arrivals.

Still, Harper sketched his party’s strategy for appealing to immigrants—messaging so closely identified with Kenney—in very broad stokes. “Fact of the matter is, most of these people have conservative views. They come to Canada, I’m sure they come to the United States, for the most part because they seek economic opportunity.”

He went on: “They have very traditional hostility towards crime and criminal elements, towards the extremes of liberal social values, they’re family-oriented people. So we appeal to them on that basis.”

There’s got to be a good deal truth in all that, but I wonder how decisive those affinities were in the past couple of elections.

During those campaigns, I spent some time in hotly contested ridings where there are a lot of immigrants, including in Toronto’s western suburbs. It’s dangerous to generalize like this, I know, but the immigrants I chatted with at partisan events seemed to me, on the whole, even less impressed by Stéphane Dion in 2008 and Michael Ignatieff in 2011 than were born-in-Canada voters.

Harper emphasizes his ability to position his party as closer to new Canadians in terms of policy ideas on the economy and crime, and in terms of underlying social attitudes. But how to disentangle those factors from his undeniable success in the past two elections in simply presenting himself as a more resolute, confidence-inspiring leader?

Then there’s this further point the Prime Minister also made today, after he proposed the inherent attraction of Conservative thinking to immigrants: “But we began our appeal first and foremost by showing up, by making sure we’re present at their events, by making sure they have a home in our political party.”

There can be little doubt he’s right that making personal connections, on some level emotional ones, matters greatly. Again, Kenney is widely credited with getting out among various immigrant groups. But isn’t Justin Trudeau proving a huge draw among similar communities? (In Trudeau’s case, though, it’s less often a matter of making sure to be present at somebody else’s event, than drawing throngs to his own.)

Listening to Harper today, there could be no doubt he’s betting heavily on the immigrant vote when it comes to his re-election chances next fall. No wonder. It’s a major part of what brought him to office. The question is whether his assertion of a deep bond between Conservatives and immigrants, based on enduring ideas and attitudes, is accurate—or if, like so much of our electoral politics, it turns out that this strategic swath of votes responds more to a given leader’s persona than anything else.