'We have a responsibility to set an example, for God's sake' 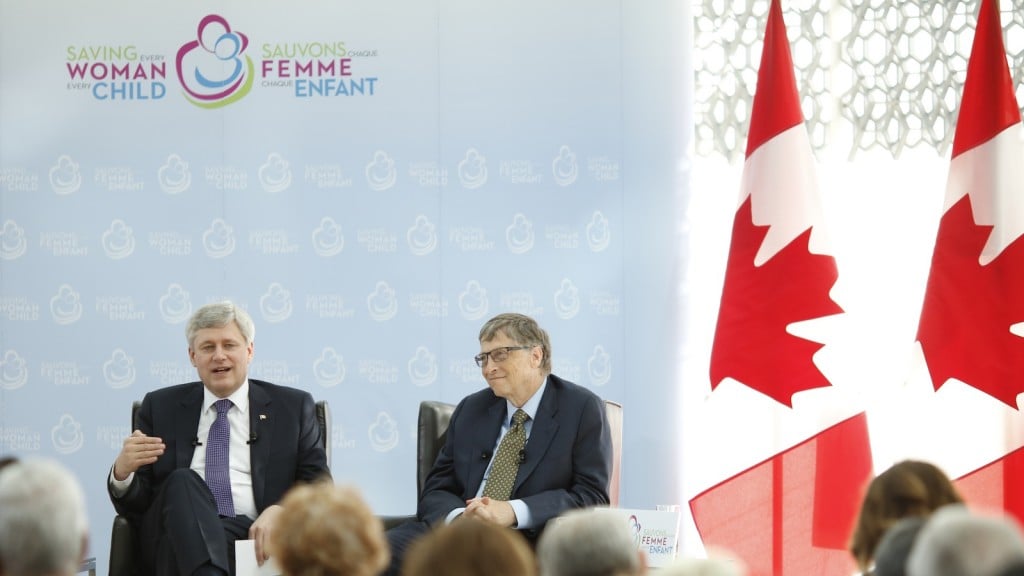 Prime Minister Stephen Harper sure sounded like he was speaking from deep conviction yesterday when he issued a passionate plea for parents to get their kids vaccinated, and for anyone still skeptical about vaccines to accept the scientific evidence.

Harper was on stage in Ottawa at an event with American billionaire philanthropist Bill Gates, and their main topic of discussion was helping mothers and children in the developing world to survive and thrive. Delivering vaccines to poor countries came up, and the Prime Minister took the opportunity to bring the subject home.

“[We] have a responsibility to set an example, for God’s sake,” he said. “We know these medical interventions work. And as an advanced, educated society, it’s completely irresponsible of people in this society to communicate anything other than that anywhere else in the world.”

He went on: “So get your kids vaccinated, get the facts from the medical and scientific community, and if you’re not a doctor or scientist yourself, listen to the people who are. It’s that simple.”

No doubt he meant every word of it. Yet anybody who has been following the controversy surrounding “nosodes,” homeopathic products  that are sometimes sold as alternatives to real vaccines, must be wondering if the federal government is consistently acting in the spirit of Harper’s staunch defence of science.

(What are nosodes? The term covers a wide range of highly diluted concoctions that contain, according to this document on Health Canada’s website, substances from “sterile lysate of liver of rabbit infected with bacillus anthracis” to “yeast cells from the digestive system of man and animals.”)

Here’s the unsettling part: Health Canada says its Natural and Non-prescription Health Products Directorate has licensed 36 nosodes for sale in Canada, starting in the spring of 2012. The directorate’s mandate, as described on its website, is to “ensure that Canadians have ready access to natural health products that are safe, effective and of high quality, while respecting freedom of choice and philosophical and cultural diversity.”

When it comes to nosodes, Health Canada defends itself by pointing out that it doesn’t approve any homeopathic product to be touted as an alternative to real vaccines. After questions were raised about nosodes in the past, the directorate ordered that packaging for these substances must be printed with the statement: “This product is not intended to be an alternative to vaccination.”

However, as Carly Weeks has reported over at the Globe and Mail, many homeopaths persist in promoting nosodes as vaccine alternatives. And longtime critics of the way alternative medicines are sold in Canada see a more fundamental problem here than these violations of this particular regulatory requirement.

The policy dilemma boils down to this: How can Health Canada properly advocate for scientific evidence while, at the same time, its natural products directorate certifies, based on “freedom of choice and philosophical and cultural diversity,” remedies that aren’t in any way supported by science?

I asked Dr. Lloyd Oppel, the British Columbia Medical Association’s longstanding critic of the federal approach to alternative medicines, about the nosode controversy, and he called this “just the clearest example of how inadequate scientific standards are not serving the public well.”

Oppel isn’t buying the government’s position that it is adequate to require the disclaimer statement on nosode labels noting they aren’t vaccine alternatives. “It seems a bit odd to me,” he said. “The only conceivable use for these products is to do exactly that.” He added: “These are preparations where there is, in effect, no active ingredient, and yet health claims are being made.”

Nosodes are currently being debated because of the recent spike in concern about the misguided anti-vaccine movement. But Health Canada’s certification of traditional and alternative medicines is far more extensive. The directorate has issued about 80,000 natural health product licences, including over 9,400 in 2014 alone.

It all goes back to 2004, when federal regulations came into force to allow products to be licensed based not on sound scientific research, but on traditional claims. Clinical evidence is considered where it exists, but for most of these products the foundation for the federal seal of approval is research into traditional uses in non-Western healing. That might be interesting folklore, but it’s not reliable evidence.

Credible critics like the Centre for Science in the Public Interest and the Canadian Medical Association have repeatedly raised the alarm about this licensing process. (It should be noted, though, that Health Canada has done essential work on the safety front, such as warning against combinations of derivatives of the herb ephedra, known as ephedrine, with stimulants like caffeine, after research flagged serious risks ranging from heart-rate irregularities to seizures.)

The Prime Minister’s plea for Canadians to trust vaccines was a welcome one, as we read about measles making a comeback. The question is whether his own government’s policy on certifying non-scientific alternatives to medicine proven to work is in keeping with the spirit of his defence of science.