Hey, at least it gets them out of the campaign office for a few hours: Liveblogging the pre-debate rallies on Elgin Street

4:41:01 PM
The sign war has begun! Right now, as I type this note, armies of 20-something campaign staffers are assembling outside the National Arts Centre on their respective corners – colour-coded, for convenience and aesthetic value – amid a sea of lawn signs touting various local candidate. Well, the NDP and Liberal supporters are, at least – when I arrived, there was only a handful of Tories – no less enthusiastic for their small numbers, but sparse, none the less – a splash of blue amid the orange and the red.

Apparently, nobody bothered to alert. the Conservatives that they needed to arrive early to stake out turf — the NDP, an orange-wearer told me with no small satisfaction — arrived shortly after 8am, and the Liberals weren’t far behind, but it. was mid-afternoon before the first recon mission from Team Harper showed up on the scene, but after a few minutes, they were joined by ground troops from the Patrick Glamaud campaign – he’s the sacrificial Tory running against Mauril Belanger in Ottawa Vanier, a seat that has been Liberal since shortly after the last continental shift, and shows no sign of changing colour anytime soon. But having failed to establish a safe zone, they were forced to fight for sidewalk space with the other two parties, resulting in a uniquely cross-partisan visual montage — on one corner, a guy in a vintage Oily the Splot shirt stuck out like a brilliant yellow thumb in front of a backdrop of Layton signs. When a passing motorist honked, more out of confusion than anything else, I asked how they’d know which sign had inspired the reaction, they just waved more frantically. “I just assume they’re all for us,” one girl confided, which seemed reasonable, all things considered — and better for morale.

That was just the preshow preshow, though — I’ll be back outside when the battle for the NAC gets underway for real. (If I’m able, I’ll post pictures too, even!)

Check back at 6pm for more. 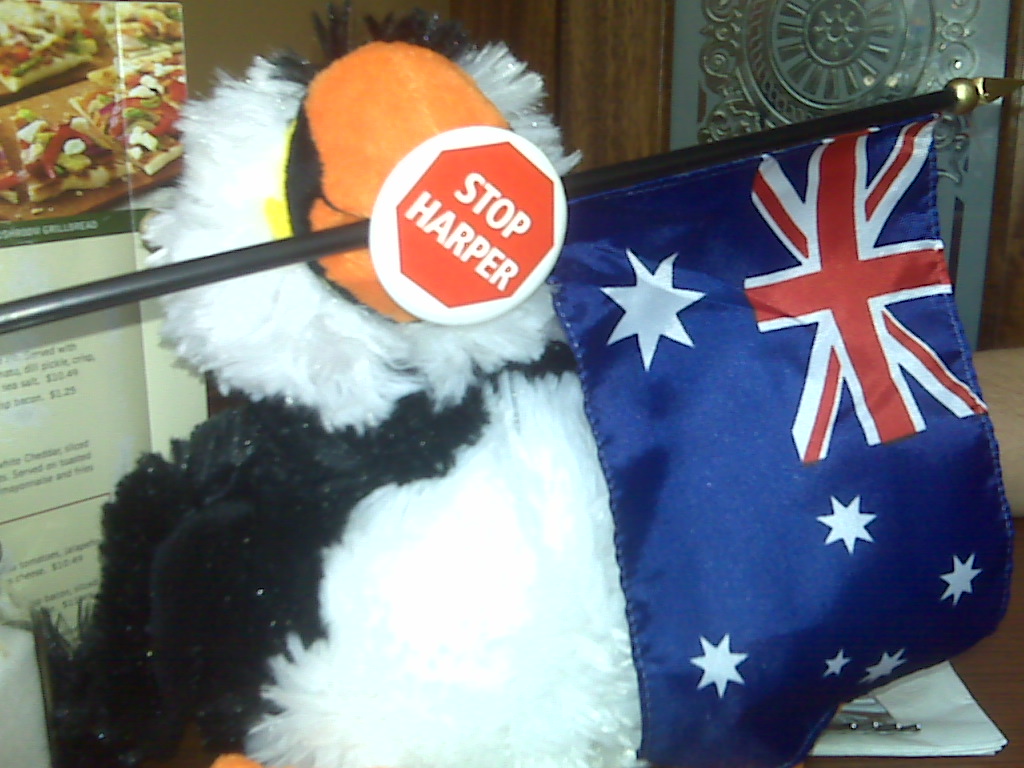 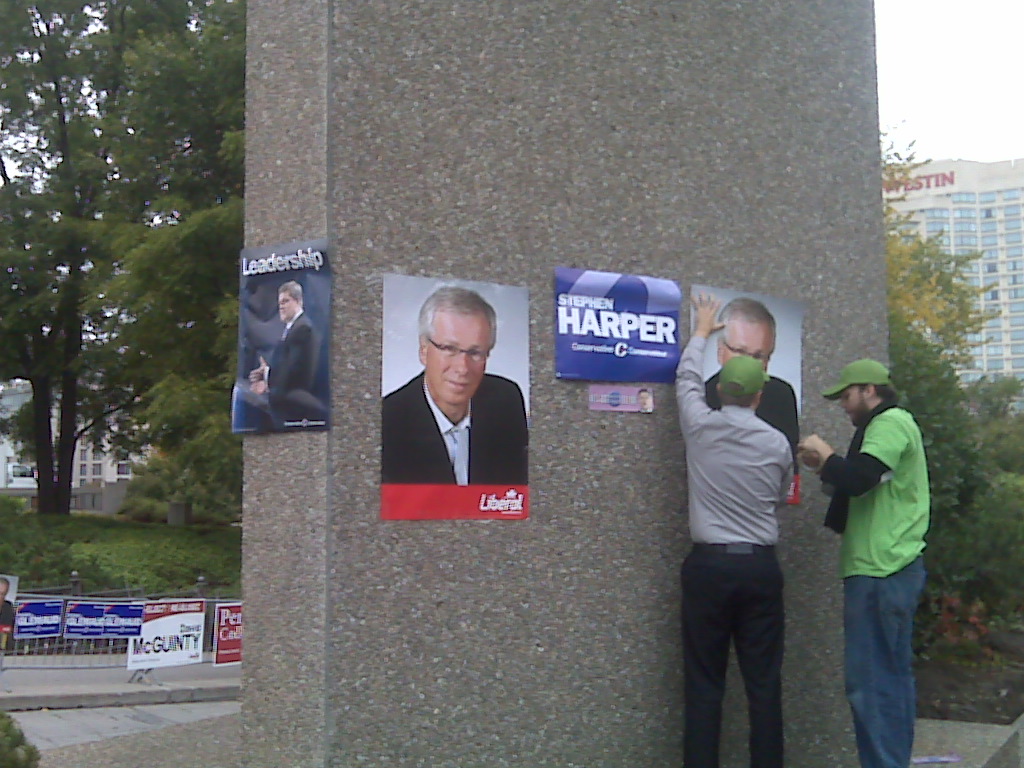 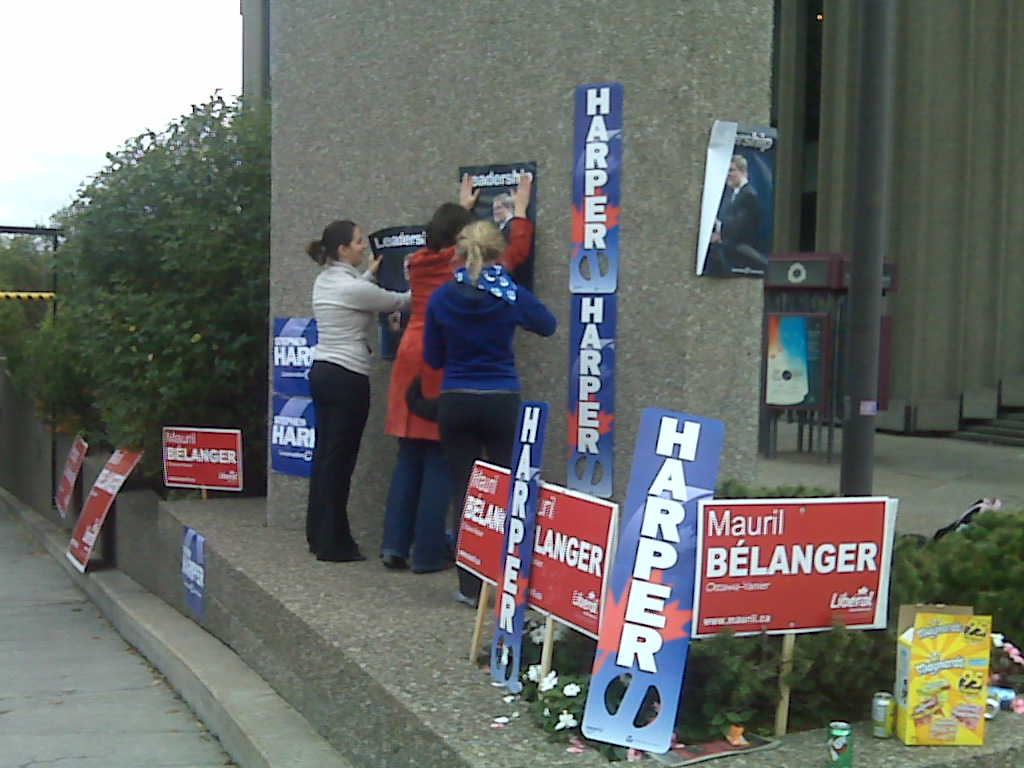 Is anyone going to drink that 7 Up? 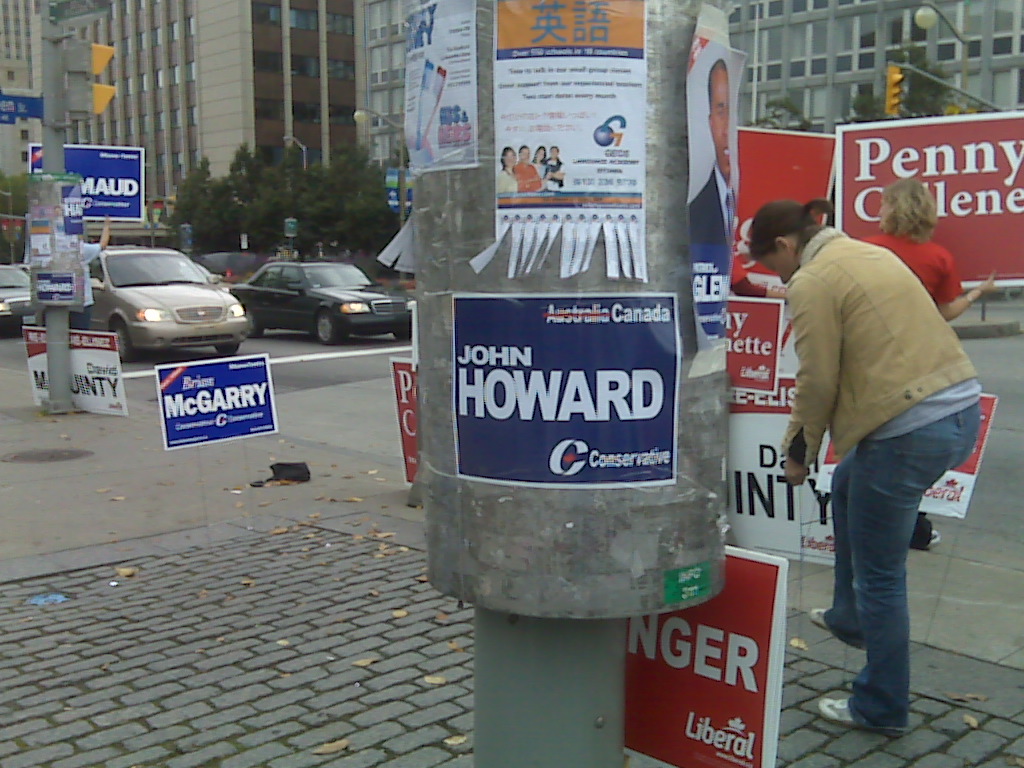 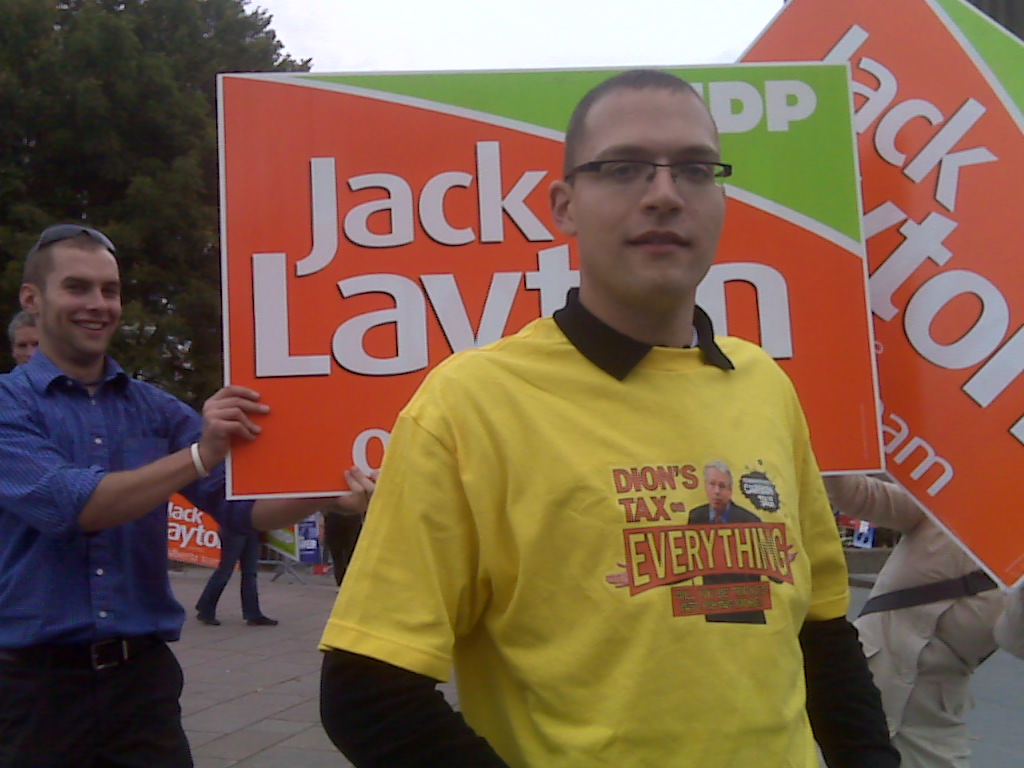 Hijinks, such as they are 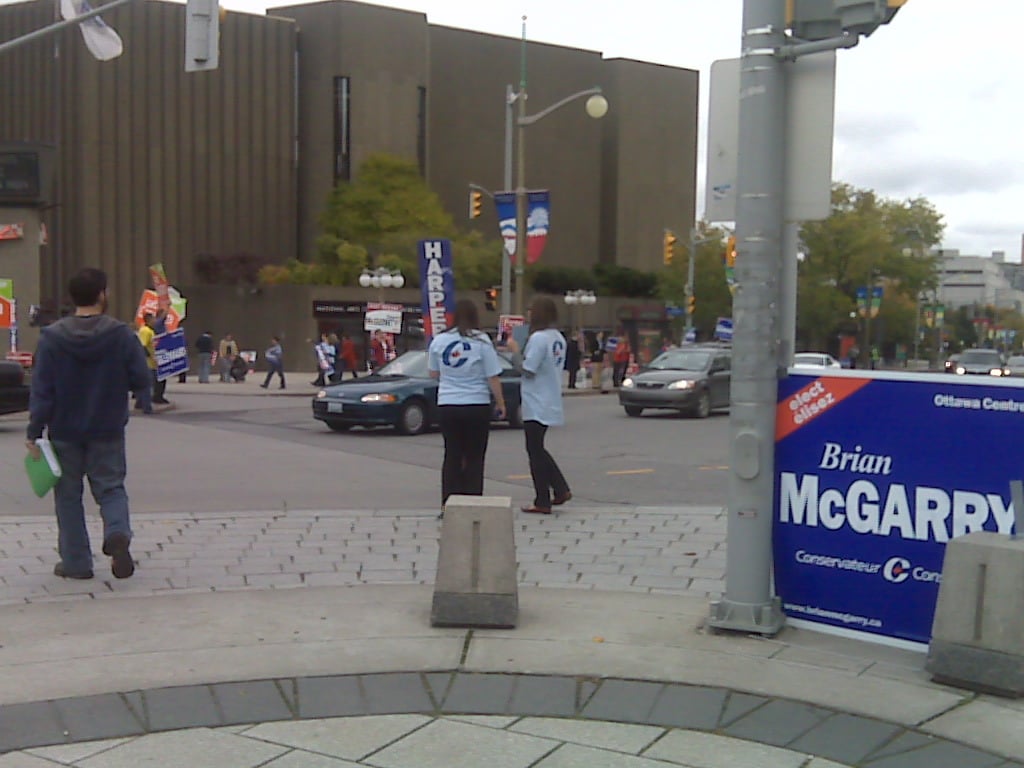 Honk if you think the content of speeches is more important than the wording!

5:52:40 PM
I’m back! Fully refreshed, wearing – well, slightly more sensible shoes than last time – and sitting, crosslegged at the crossroads of history. It’s nearly 6pm, so the crowds – of all colours – have intensified considerably in the hour or so that I was away; more importantly, the megaphones have arrived. The Tory megaphones, that is — despite a late arrival, the Conservatives have managed to escalate the arms race, and are gleefully taunting the phalanx of NDP supporters – and taking a backhanded shot at the Liberals – by attesting that they “salute our new official opposition!” The NDP troops don’t know exactly how to react — Canadian politics makes for such messy interparty dynamics.

5:57:58 PM
The Kangaroo has arrived – with a retinue of Australian flags – and chants of “Steph-ANE, Steph-ANE, Steph-ANE”, and an undecided voter has now buttonholed me, and is explaining why he will never vote Liberal. Oh, democracy. Sometimes you can be awfully inconvenient – like when one is trying to simultaneously liveblog and discuss the plight of the nonpartisan voter – but I still love you.

6:09:21 PM
New chants – from the Conservatives, to the Liberals: “You stole from us!” The response: “In and out, in and out,” followed shortly by “Sweater vest! Sweater vest!”

6:10:56 PM
An attempt at counterchantelligence by Team Orange fails. “I say “PM”, you say “Jack!” suggests a breathless organizer, which inspires slightly muffled – and self conscious – giggles from her troops. She goes ahead anyway, but the response is so lacklustre that she trails off in mid-P.

6:13:27 PM
A Tory points out to me that, from the signs on display, one would think the NDP has no candidates – the signs all say “Jack”, although in fairness, his teams — Ontario, Newfoundland and Labrador — are represented, albeit in a distinctly smaller font.

UPDATE: since I typed that, a few Paul Dewar signs have surfaced.

6:17:52 PM
Oh, it’s not a predebate rally until the “Liberal, Tory, same old story” chant gets hauled out from the distant, sepia-toned past.

My view has been somewhat obscured, by the way, thanks to a giant Baird sign – with a flag on top; now really, that *is* overkill. At least I’m on a ledge – literally, the ledge of the now desolate flowerbed, which is actually the perfect place to stake out the driveway down which all of the leaders will eventually descend.

6:22:55 PM
A Kory sighting! He fled, alas, before I could ask for some Conservative-branded mittens. Seriously, y’all, it’s getting chilly out here. Some hot chocolate – or maybe a trashcan fire – would be lovely.

6:26:07 PM
Thundersticks. My nemesis. Liberal thundersticks at that. More importantly, Liberal pizza has arrived, but alas, I fear there will be none for the press – by which I mean me; I don’t think any of my colleagues are out here in the throng, but honestly, even from my ledge, I can’t see much past the signs that surround me.

6:40:37 PM
Something that confuses me: When a bus drives by, and honks, is the driver honking on his own behalf, or that of his passengers? Not that it really matters, since it is impossible to know which team has inspired his acknowledgment. We need a code – one honk for the Tories, two for the Liberals, etc. Oh, and I actually spotted a Green sign-carrier earlier, but he vanished into the crowd before I could take his picture.

6:49:06 PM
Okay, about ten minutes until the first leader arrives – and no, I’ve completely forgotten, if ever I knew, who that would be. Since I’ve already developed frostbite, and my teeth will probably be chattering until sometime tomorrow morning, I’m determined to stick it out for all five of them. Also, I’m pretty sure that even if I wanted to leave, I couldn’t make it through this crowd – which, incidentally, is almost a perfect split between red and blue. The oranges are on the other side.

6:52:20 PM
Okay, I just misheard “Yes We Can” as “Breastfeed Ken!” I think my hearing is definitely going, but it makes the chants so much more interesting.

6:56:44 PM
Did I mention the mounties are, in fact, on the scene? Although so far, they haven’t done much, other than to keep the road clear, and serve as sort of a human wall between the two sides. Oh, and move the barricades, which they just did, to much cheering from the NDP, although I’m not sure why, exactly.

7:02:50 PM
Okay, the Tories may have megaphones, but the Liberals have a guy on rollerskates. I’m not sure who comes out ahead there.

7:04:19 PM
Okay, seriously, every time a campaign bus drives by, the crowd goes wild — and it seems to happen every ten minutes. It’s an empty bus! It cannot feel your love!

7:06:04 PM
“Get it done! Get it done!” That’s from the Tories, and I’m not sure if it’s an imperative — you, you people within earshot: Get it done! — or ambiguous verb tense. The response from the Liberals – well, a Liberal: “You know who got it done? Maxime Bernier got it *done*.” Oh, Julie. If only there was a word that rhymed with Couillard. Okay, other than “petard”, which really is serendipitous.

7:10:18 PM
The Bloc is here! I didn’t even see them arrive, mostly because they’re way down at the other end of the battlefield – which is like, about a hundred feet, but feels like a different country. They are jauntily bobbing their signs, and the Liberal Kangaroo is now over there, acting as emissary. I bet they have great chants.

7:16:22 PM
Okay, turns out the real action is along Elgin, which seems to be made up of late arrivals from all parties, who are less tired and frozen to the core than the diehards by the driveway.

Mother, shall I go and Maffick? Hang about and hinder traffic?

Anyone who gets that without googling, by the way, is awesome.

7:25:35 PM
I think Gilles Duceppe may be arriving, but it’s impossible to tell, really, because the chants don’t change. The chants are eternal. The chants will haunt me to my grave.

7:28:58 PM
Okay, they’re all in, as far as I know – the crowd is thinning out a bit, but I think it’s one of those tests of will, where no party wants to be the first to disappear from the landscape. I, however, have no such restraint. I’m going to sign off, and meet you in – oh, a half hour or so – over on the Macleans.ca superfantastic nine-way group blog. See you there! 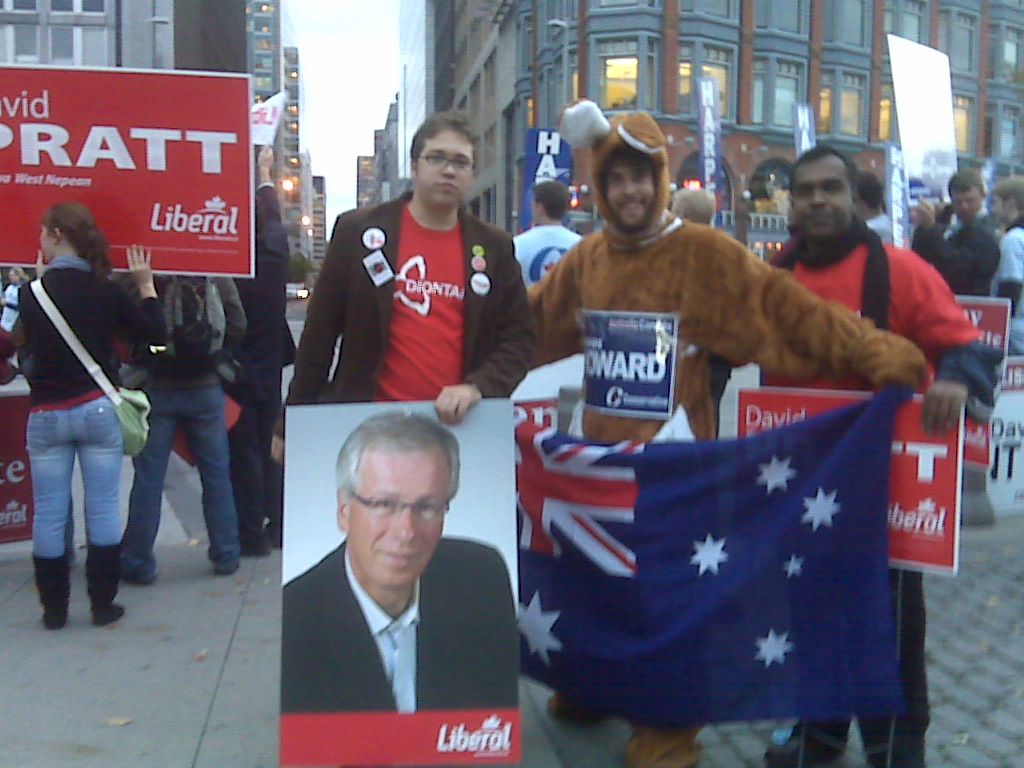 Some kind of marsupial, no doubt 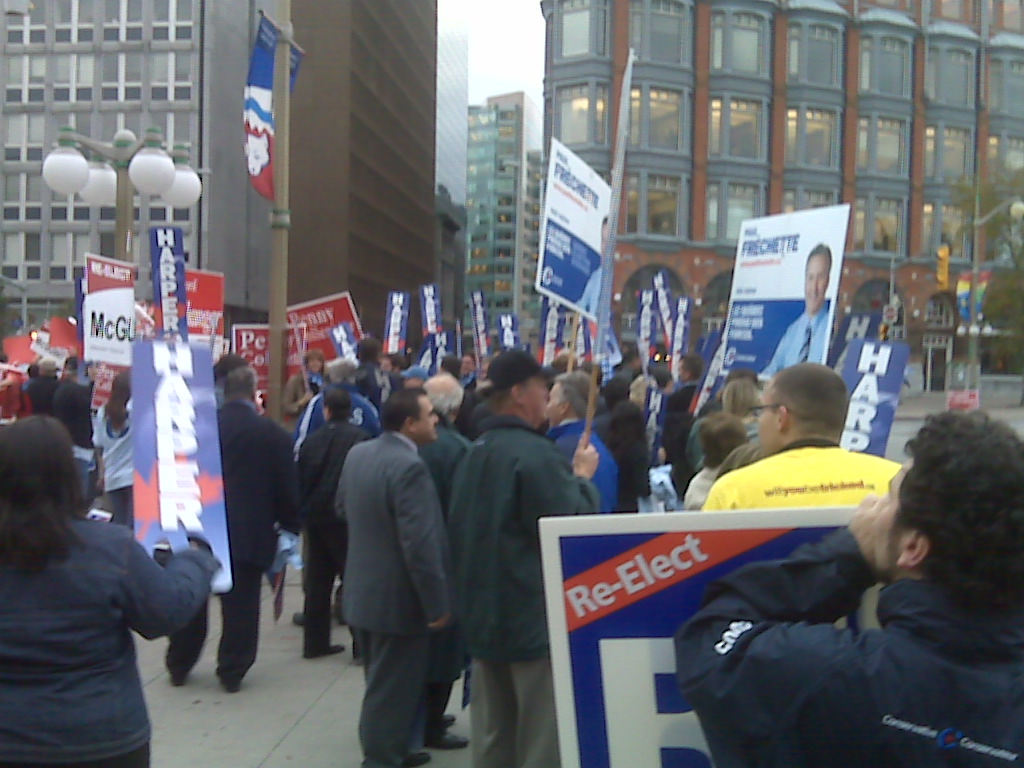 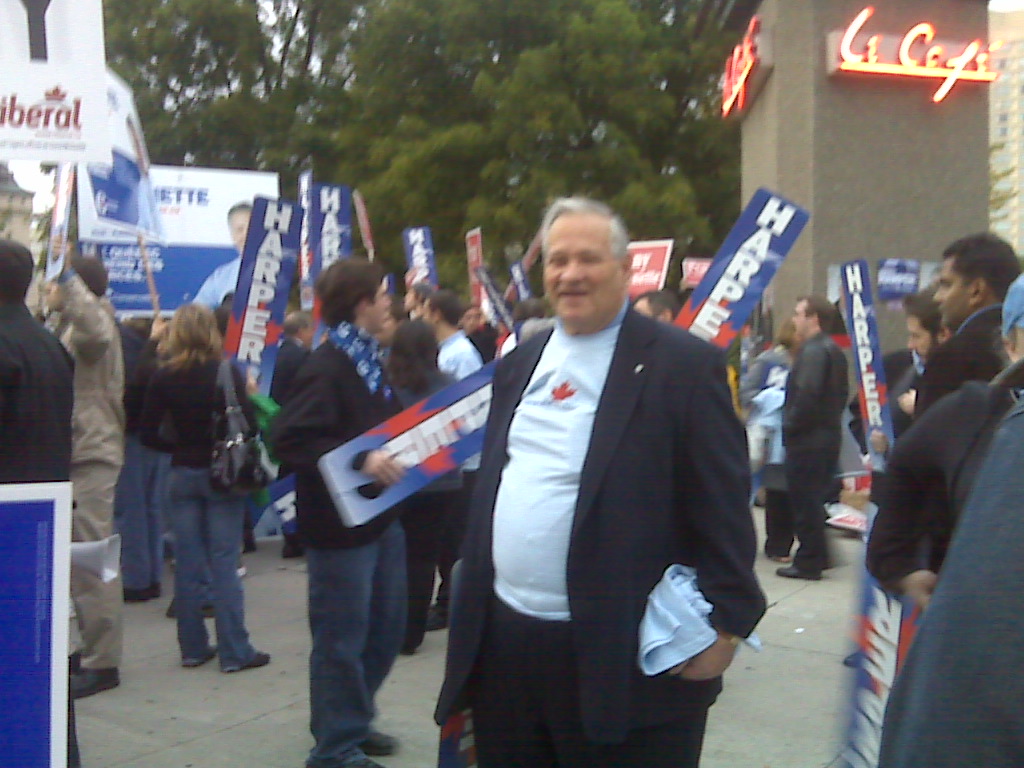 FILED UNDER: democracy breeds an excess of pep red and blue and orange and the other blue and green warming up the crowd what rhymes with 'duceppe'?