High anxieties ahead of Trudeau's first meeting with Trump

Trudeau, joined in Washington by five top ministers, will hold a joint press conference with President Trump in the afternoon 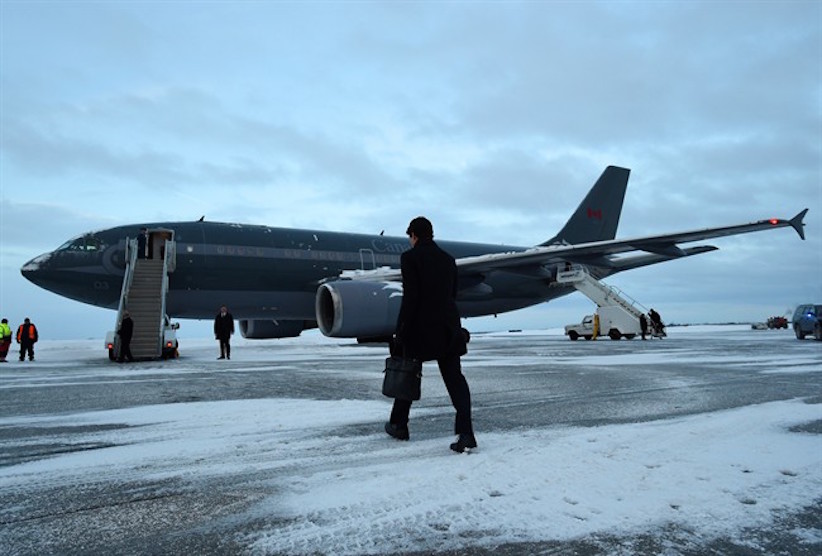 Prime Minister Justin Trudeau is seen departing from Ottawa on Monday, Feb. 13, 2017. The Prime Minister and U.S. President Donald Trump will hold a one on one meeting today in the Oval Office, and afterwards will be joined by other top officials for a broader meeting about Canada-U.S. relations. THE CANADIAN PRESS/Sean Kilpatrick

OTTAWA – A foot of weekend snow held back Justin Trudeau’s plane to Washington for an hour this morning, but the prime minister is now on his way for his first face-to-face meeting with U.S. President Donald Trump.

Trudeau and Trump will hold a tete-a-tete later this morning in the Oval Office, and then will be joined by other top officials for a broader meeting about Canada-U.S. relations.

Freeland, Sajjan and Morneau were all in Washington last week to prepare the groundwork for today’s meeting, while Goodale and Garneau worked the phones with their counterparts and others in Trump’s circle.

Trump and Trudeau will then host a round-table discussion with women business leaders and female entrepreneurs, launching a task force that aims to keep professional women in the workforce — a priority, officials say, for both leaders.

The two will lunch together at the White House, and hold a joint press conference mid-afternoon.

MORE: The five most pressing items in U.S.-Canada relations

While the summit agenda seems fairly routine, there is no guarantee that will also be the case for the actual meeting. Unlike most summits between world leaders, no one really knows what the two men will say to each other or what direction their conversations will take; and the uncertainty swirling around the outcome of their discourse has Ottawa on edge.

The two have talked on the phone a couple of times since Trump won last year’s presidential election. But the prime minister has steered clear of directly commenting on some of Trump’s controversial statements and actions, such as the ban on travellers from seven Muslim majority countries.

Last week, Trudeau said he would be respectful in broaching areas where the two men disagree, and he pointed out there are issues where he sees eye-to-eye with Trump, such as creating jobs for the middle class.

The federal Liberals have also indicated they are willing to re-negotiate the North American Free Trade Agreement, responding to a campaign promise by Trump to ditch the current accord. However, the scope and timing of the talks remain far from clear.

“I am counting on having a good working, constructive relationship with the president,” Trudeau said last week in Yellowknife.

No doubt the prime minister of Australia had the same goal, but Trump lashed out at Malcolm Turnbull over an immigration matter during their first phone conversation earlier this month. Trump cut the call short.

Relations with Mexico are also frayed, with Trump persisting with plans to build a wall between the two countries to keep out unwanted migrants.

Japan, on the other hand, is likely breathing a sigh of relief after a meeting between Shinzo Abe and Trump — followed by a weekend of golf at Trump’s palatial home in Florida — went off without any major incident.

In Canada, the Opposition leader has offered to lend Trudeau a hand in dealing with the Trump administration.

Interim Conservative leader Rona Ambrose sent the prime minister a letter over the weekend proposing they work together on a bipartisan basis to build a relationship.

She noted that members of her caucus have forged strong contacts with American lawmakers and some also have experience in trade issues, a crucial area given Trump’s plan to renegotiate NAFTA.

NDP Leader Tom Mulcair, however, has criticized Trudeau for not being more strident.