For the record: Who said what during the final showdown of the 2015 election campaign 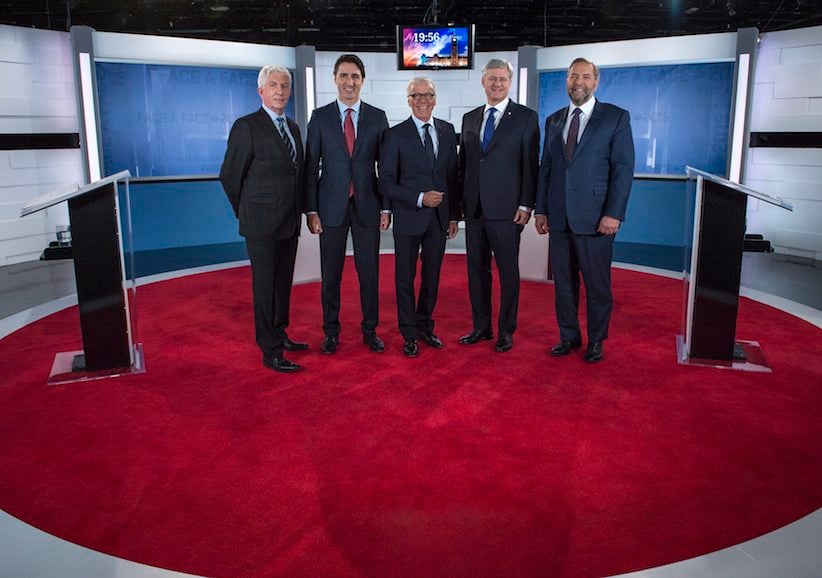 MONTREAL — Some key exchanges from the French-language leaders’ debate on Friday:

ON CANADA IN THE WORLD

NDP Leader Tom Mulcair: “You’ve never met a war you didn’t like. When the only tool is a hammer, all the problems seem like nails. You’ve just said the world is dangerous, but I don’t think by adding more bombs, we’re going to make the world safer.

“When you arrived at power, we were 33rd for peacekeeping, now we’re at 68th place, because you don’t believe in peacekeeping.

“You didn’t lift your little finger to help with the Congo.”

Mulcair: “You’re the first prime minister since the Second World War not to have our turn at the Security Council of the United Nations.”

THE WAR ON ISLAMIC STATE

Liberal Leader Justin Trudeau: “Canadians expect one thing from their prime minister and that’s knowing how to do two things at once — protecting their rights and liberties and protecting their security. Mr. Harper believes we needn’t do more to protect our rights and liberties, Mr. Mulcair doesn’t want to do more to protect our security. The Liberal Party has always understood how to balance the two and that’s what we will continue to do.”

Bloc Leader Gilles Duceppe: “What I don’t understand is this unwillingness not intervening against Islamic State. We must intervene. We could arrive with a bouquet of flowers and a bag of groceries and say we’re here to help the refugees. I don’t think we’d be well received by the Islamists. We must do what we did in Kosovo, there was military action and we welcomed 6,000 Kosovars in a short time. We must act rapidly because we cannot allow an expansion of this type of fanaticism.”

Trudeau: “Mr. Mulcair, you made bad choices. You chose to balance Mr. Harper’s budget at all cost which means you can’t invest right now in the help that Canadians and Quebecers need. We have made another choice _ three modest deficits to give help to children and pull 315,000 kids out of poverty. An increase in taxes for the highest wage earners, a cut in taxes for the middle class and to invest $60 billion in our infrastructures across the country because we know in Quebec, it’s badly needed.”

Mulcair:  Mr. Trudeau, in my family, we’ve always said that actions speak louder than words. I’m going to tell you that you’re talking about Harper budgets, you supported by voting in favour of, numerous Harper budgets. I can assure you I never voted for one of Mr. Harper’s budgets. You supported him on Bill C-51, the biggest attack on rights and freedoms in Canada since the Liberals imposed the War Measures Act in 1970. You supported him on Keystone, you have the same economic, environmental and social policies as him. We voted against Mr. Harper, we want to defeat him and replace him.”

Trudeau: “Mr. Mulcair, on the issue of the economy, which is of most importance to Canadians, despite the failure of Mr. Harper’s economic policy, you chose to balance his budget which means you can’t invest in families, you can’t lower taxes for those who need it, you don’t have the capacity to give, immediately, help to municipalities and regions that need it. You’ll spend a lot of time trying to change the subject and attack me personally, but you don’t have a plan to invest right now.”

Mulcair: “Mr. Trudeau, no one is attacking you personally, it’s a simple fact, verifiable that you voted in favour of Mr. Harper’s budgets.”

Trudeau: “We are talking about this election.”

ON TAXES AND JOBS

Mulcair: “We proposed no tax increases and you know it. The only companies that will get higher taxes are the big corporations, the banks, whose taxes will increase by two per cent. You gave $50 billion worth of gifts to these big companies and the result? 300,000 more people out of work then when the crisis hit in 2008.”

Harper: “It’s the same song again for the NDP: They will increase taxes to balance the budget and it will destroy jobs in Ontario and in British Columbia. We’ll lose a quarter of a million jobs

Trudeau: “The interest rates are at record lows and it’s money to invest to give benefits to the most rich and the fact you say it’s going well is proof you are completely disconnected from reality.

Harper: “When we talk about disconnected, you are proposing ending billions of surpluses for the middle class and to replace them with deficits. When you create deficits in a period slow growth it will create permanent deficits. That’s what your predecessors did.

Harper: “Mr. Mulcair, you are attempting to change the subject because your position is entirely disconnected from the reality of Canada and the opinion of Canadians and Quebecers. The reality is that we recognize that from time to time, we must not hide our identity. We do that for reasonable reasons and it’s necessary to have legislation, it’s supported by the population, we want to encourage equality between men and women in Canada.”

Mulcair: “What you’re trying to do above all is hide your record. You are using it as a weapon of mass distraction.”

Duceppe: “I’m asking you, do you think it’s normal for Canada Post to come on your property and install a mailbox, or if they go to a park and install one without talking to the municipal authorities, all because of an 1869 law? It’s the old colonial privilege and I know you like the Queen and the monarchy but do you think that’s normal?

Harper: “It’s a system that works for two-thirds of the country. Canada Post makes their own decisions. We use emails more and more and Canada Post is making changes to adapt to this reality and to protect the interests of taxpayers.

ON ETHICS AND THE SENATE

Harper: “In terms of our record on ethics we have put in place strict rules. Compare to Mr. Mulcair there are 78 NDP MPs who are in front of a court and accused of taking almost $3 million from parliamentary funds for their political party. Honestly, it’s the mentality of the sponsorship scandal to use public money for partisan activities.

Mulcair: You know what intrigues me every time Harper says it? He talks about people who are responsible. And yet who is responsible for the Prime Minister’s Office? The prime minister. When a cheque is written for $90,000 from your office and everyone knows about it and you act like you’re the only one who doesn’t, no one believes you.

When you have ties to Duffy and he does fundraising for you and then you try and hide it no one believes you. It’s a revolving door of favouritism and corruption in your office. You wanted to change Ottawa and it was Ottawa that changed you.

Trudeau: The reality is that your aides were part of a coverup (with Duffy). You always promised to never nominate Senators but you broke that promise during your first day as prime minister and then broke your promise 57 times after. You always break your promises. We are pushing transparency. We will reform the institution so it can work. We will not open the constitution.

Harper: You are campaigning with Mr. (Jean) Chretien and Mr. (Paul) Martin. You need to ask them about where all the $40 million went during the sponsorship scandal. During our time in office after 10 years of reports from the auditor general there is no money lost, no money stolen. It’s a completely different situation.