Stephen Harper, Thomas Mulcair, Justin Trudeau and Elizabeth May faced off at Maclean's debate, including a hot argument over separatism

OTTAWA – Stephen Harper’s record on the economy and the environment faced an all-out assault from three different fronts, but the long-dormant issue of Quebec separatism generated a heated exchange in the second half of Thursday’s televised leaders’ debate.

Harper was repeatedly forced on to the defensive, “clarifying” economic statistics flung at him by his opponents.

But, he later stood back as Trudeau, running in third place in public opinion polls, turned his sights on Mulcair with attacks over the NDP leader’s pledge for special status for Quebec.

Mulcair said in June that his party supports the so-called Sherbrooke Declaration of 2005, which endorses the principle of recognizing a referendum victory by the sovereigntist Yes side even by a majority of just 50 per cent plus one.

“In doing so, he is actually disagreeing with the Supreme Court judgment that says one vote is not enough to break up the country,” said Trudeau, who was taunted by Mulcair to provide a percentage he would find acceptable.

“You want a number, Mr. Mulcair? I’ll give you a number. My number is nine,” Trudeau retorted.

“Nine Supreme Court justices said one vote is not enough to break up this country. Yet that is Mr. Mulcair’s position. He wants to be prime minister of this country and he’s choosing to side with the separatist movement in Quebec and not with the Supreme Court of Canada.” 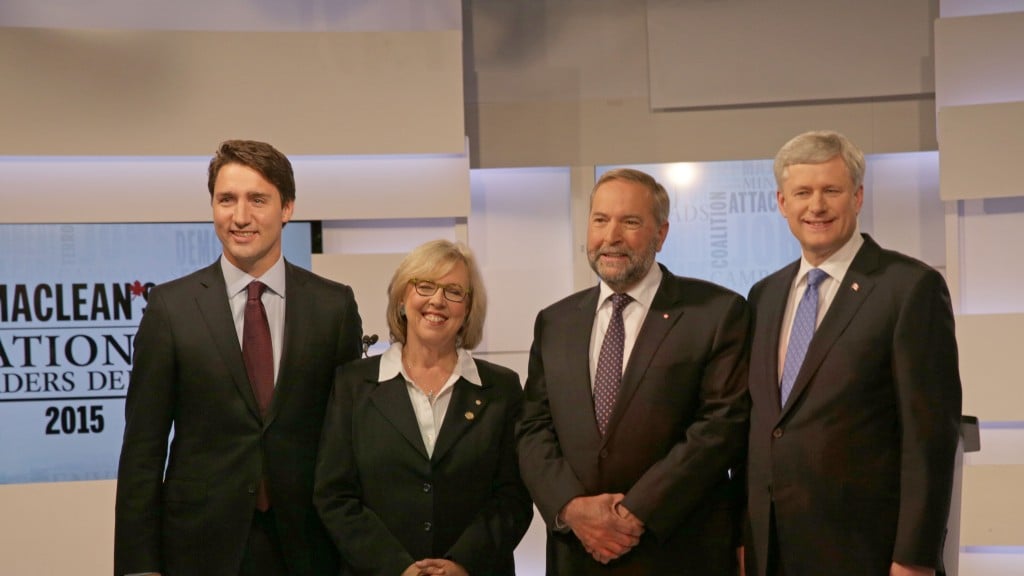 Harper piled on and accused Mulcair of placating separatists.

The exchange took some of the heat off the Conservative leader, who endured a series of sustained attacks throughout the debate’s first hour.+

Harper blamed low oil prices for the slumping economy, but both Mulcair and Trudeau argued the malaise runs deeper and blamed Harper’s policies —particularly the Conservative plan to allow income-splitting for families with children under 18.

The NDP leader reminded Harper that in the 2008 election, he denied the country had slid into recession when in fact it was on the verge of the economic crisis and run eight deficits.

“He’s added $150 billion to Canada’s debt in the last 10 years,” Mulcair said, also noting a flurry of government spending announcements just prior to the election call. “Honestly, Mr. Harper, we cannot afford another four years of you.”

Trudeau and May went after the Conservative leader on the government’s gutting of environment regulations — something Harper described as “streamlining.”

The Maclean’s magazine was moderated by political editor Paul Wells, and could very well turn out to be the only English-language debate of the campaign involving all four leaders.