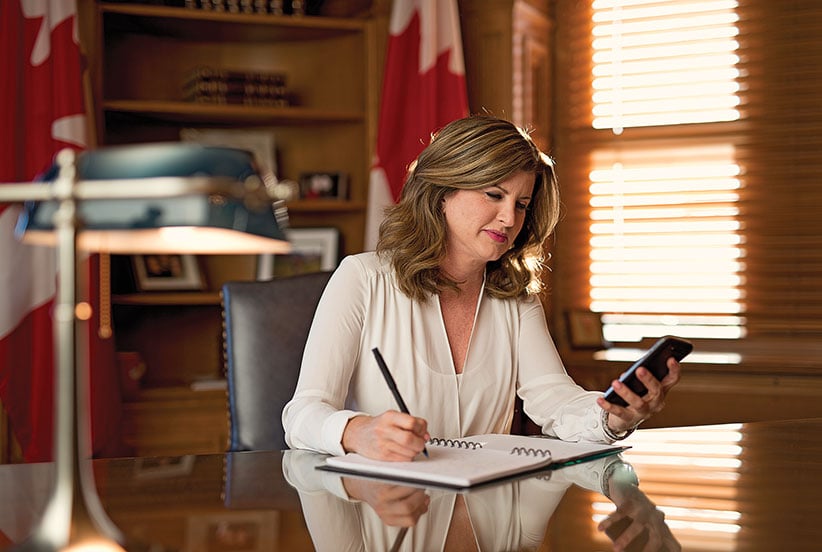 On Nov. 15, Maclean’s celebrated the best of Ottawa with the ninth edition of our Parliamentarians of the Year awards, which were handed out based on the results of a secret-ballot survey of their peers in the House of Commons. Conservative interim leader Rona Ambrose won this year’s award for the hardest-working MP. View the full list of award winners.

Rona Ambrose has heard all the stories her mother tells about how when her small daughter had only just mastered solid ground, she would scale door frames, scramble up walls and even find her way to the roof. “She just went crazy, because I would get up on top of things and just had no fear, and I could barely walk,” Ambrose laughs.

Now, as an MP and leader of the Opposition Conservatives, Ambrose makes use of that same tenacity to simply will things to get done on Parliament Hill. After 10 years as a minister in Stephen Harper’s government, handling files ranging from Environment to Public Works to Health, she grew accustomed to a certain furious pace in the job. Now, as interim party leader and leader of the Opposition, it’s a different rhythm but no less hectic. There’s more hands-on time working with people, considering big-picture party and caucus strategy and helping her 96 MPs accomplish what’s important to each of them. She likes this new role even better than cabinet. “It is all-encompassing, when you think about the tempo and the work schedule,” she says. “It’s massive, but I love it. I love this role in particular because it’s so people-based. I find I feel in this role fearless—there’s no issue too small or too big to take on.”

Ambrose is known on the Hill as a collegial MP, a tireless worker and someone who gets things done. Now that her party’s role is introducing new issues and causes to push the governing Liberals to pay attention to, it’s sometimes pure chip-away-at-it perseverance that gets the job done. In October, MPs voted in favour of a Conservative motion to bring Yazidi refugees—a religious minority group whose women and girls have been targeted by ISIS for sexual slavery—to Canada; Ambrose says that was the result of eight months of advocacy from her caucus. “I just said, ‘We’re not gonna give up on this, and we’re just gonna keep at it until we get a result,’ ” she says. “And we got a result.”

It’s been just a year since the federal election shuffled the composition of the House of Commons dramatically. But Ambrose points to concrete, incremental victories for her party in areas such as pipeline approvals, pushback on a job tax in the high-tech sector and the Tories’ insistence on a referendum on electoral reform—an esoteric topic, she admits, but a crucial one to Canadian democracy—as signs they’re getting the job done. “The Opposition has an incredibly important role to play, and the government has an equally important role to play,” she says. “If we both do those jobs well, we have a functioning democracy.”

FILED UNDER: Editor's Picks Parliamentarians of the Year 2016 Rona Ambrose