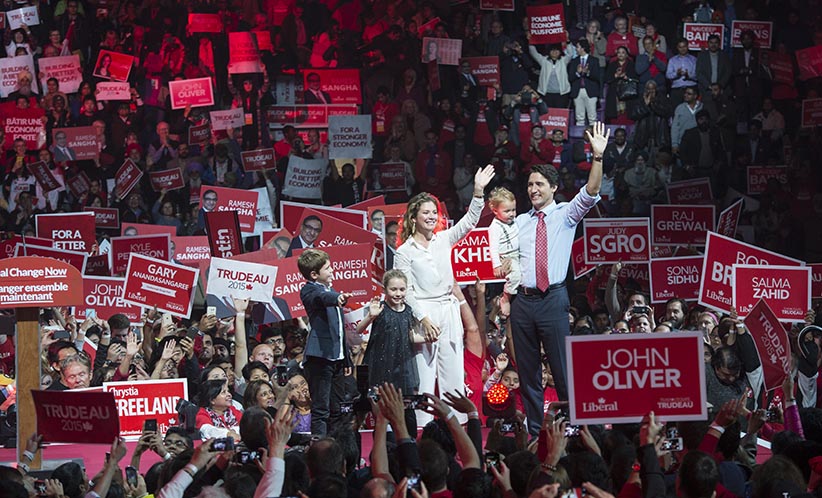 Liberal Leader Justin Trudeau holds his son Hadrien, with his wife, Sophie, by his side, as well as his two other children Xavier, left, and Ella-Grace, during a rally on Oct. 4, 2015, in Brampton, Ont. (Paul Chiasson/CP)

Telling details from the rousing speech Justin Trudeau delivered yesterday at what Liberals are touting as “the biggest rally in a generation” are worth pausing to consider, as the campaign rumbles on into its final two weeks, for reasons other than the sheer size of the gathering that cheered them.

The location is the clearest clue to where the Liberals think this campaign is heading in its final two weeks. In the heart of the ethnically diverse suburbs on Toronto’s western edge, the junior-hockey arena in Brampton, Ont., where Trudeau took the stage is strategically positioned to draw in voters from the nearly 50 ridings in and around Canada’s biggest city.

It was here that Michael Ignatieff led the Liberals in 2011 to their grimmest disappointment—including losing his own riding—and here where Trudeau must make huge gains to come out of top on Oct. 19.

Related: For the record, Justin Trudeau’s notes from Brampton’s rally

In case there were any doubt about the voters the Liberals are targeting, Trudeau made combatting traffic congestion—not traditionally a high-level preoccupation of federal leaders—a key point in his speech. He mocked Stephen Harper for claiming that his federal infrastructure spending is making it easier for Canadians to commute.

“Really, he actually said that,” Trudeau said. “Stephen Harper just doesn’t see what you’re going through. When you spend a decade in a motorcade, you don’t have to worry about traffic jams.”

It’s actually not self-evident that the Harper government’s record on transit spending has been laughable. “This level of permanent, ongoing funding has the potential to be transformative for public transit across the country,” Brad Woodside, the mayor of Fredericton and president of the Federation of Canadian Municipalities, said after the Tories promised more money for this top city priority in last spring’s budget.

Still, Trudeau is on a roll and, at least in the Brampton rink, the party faithful ate up his lines about Harper being so absurdly out of touch. That’s the man he was mocking, mind you, not Tory voters. To rank-and-file Conservatives, Trudeau’s message was more conciliatory. “Conservatives are not our enemies,” he said. “They’re our neighbours. They want what’s best for their country, just like we do. They want safe communities and a growing economy.”

It sounds a lot like the Liberals are focusing now on trying to coax Conservative-leaning voters into their column. There was no similar message directed at the NDP. In fact, Tom Mulcair featured only fleetingly, and in French, in Trudeau’s big speech—a reflection of the polls that suggest the NDP leader is now struggling to pull back into contention to win. At least in the Toronto suburbs, the Liberals don’t seem to view the NDP as a major threat anymore.

Trudeau got a lot of cheers last night for just about everything he said. To my ear, though, there was a particular edge to the gust of audience reaction that followed his reference to Harper’s unfortunate choice of the term “old stock,” during last month’s debate among the leaders on economic policy, to describe Canadians whose families came here generations ago.

Denouncing Harper as a divisive politician, Trudeau said, “East against west, urban against rural, French against English, so-called ‘old stock’ Canadians vs newcomers”—and the crowd erupted—“his first instinct is to appeal to the worst instincts.” The message here to immigrants and their children could not be missed, and wasn’t.

That was pretty tough stuff from a politician who is promising not to go negative. Trudeau insists that’s Harper’s way, not his, and warned his followers to expect the worst from the Tories in the coming days. “Harper’s Conservatives are going to do the only thing they know how to do,” he said. “They’ll throw every nasty ad and every dirty trick in the book at us.”

But when it came to summing up the task at hand for the Liberals, Trudeau didn’t pull his punches: “Most of all, we have the chance to take this country from Stephen Harper and give it back to Canadians.” By the time he was declaring that the country needs taking back, it was hard to remember those earlier lines about Conservatives being neighbours, not enemies. In case you were wondering, this campaign will not end placidly.