Members from all sides of the Commons spoke of the loss that still echoes from the tragedy in the remote community of La Loche, Sask., where four people were killed 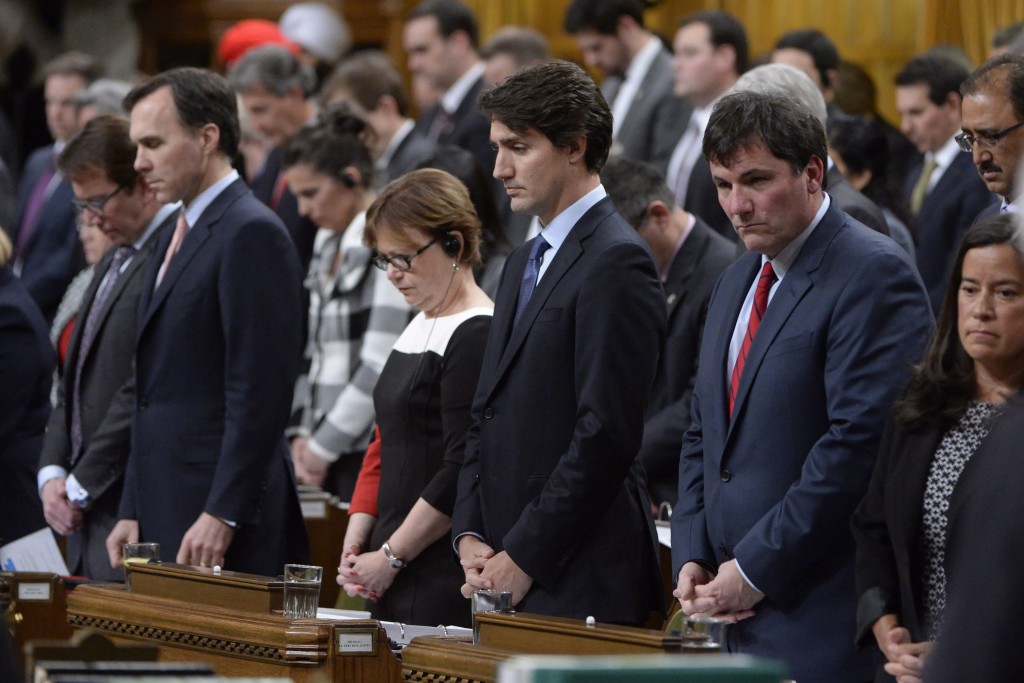 Prime Minister Justin Trudeau (centre) and Liberal MPs stand for a moment of silence for the Saskatchewan shooting victims during Question Period in the House of Commons on Parliament Hill in Ottawa, on Monday, Jan.25, 2015. (Adrian Wyld/CP)

OTTAWA – There could be help for remote communities in the coming federal budget, Saskatchewan’s lone cabinet minister hinted Monday as Parliament remembered the victims of last week’s deadly shooting in La Loche.

The remote northern town is just one of many isolated communities in need of help, Public Safety Minister Ralph Goodale said after the first question period of 2016 — one that included MPs bowing their heads for a moment of silence.

“The lessons from La Loche will have broader application than just this one community,” Goodale said outside the Commons.

“La Loche, obviously, has particular difficulties but you will find similar problems in other communities as well.”

Members from all sides of the Commons spoke of the loss that still echoes from the tragedy, in which four people were killed and seven others wounded in La Loche, a remote northern town populated predominantly by First Nations members.

“The entire government and, indeed, the country, stands with the community of La Loche,” said Prime Minister Justin Trudeau. “Our heartfelt condolences go out to the community, to the family members and we offer all our support.”

Sources close to the prime minister say Trudeau will travel to northern Saskatchewan to visit the community in person, although timing details were not immediately available.

“For the families and loved ones of those killed, few of us can even imagine the pain, but we grieve alongside you,” she told a news conference. “We offer our prayers for those who are injured for a fast and full recovery.”

“We send out deepest condolences to the families of the victims, our thanks to the first responders for their quick action and our love to the community that continues to suffer this terrible loss,” Mulcair said.

“The matter of mental health needs in First Nations … and other indigenous communities is a pressing matter that I will pay full attention to,” she said.

New Democrat Charlie Angus demanded action from the minister, saying “condolences are not enough” and that the federal government too often ignores mental health needs in isolated northern communities.

“Parliament must take action, because all too often the young people feel left alone,” he said.

“Her department routinely rejects requests for counselling services, for mental health for indigenous youth. What steps will she take to guarantee that that practice will end … not just in the days and weeks ahead but in the years to come?”

Philpott said she was with Angus.

“I absolutely agree with the member that, up until now, there have been absolutely inadequate resources and serious gaps in terms of the health outcomes and the opportunities that First Nations children and Inuit children have to access these resources,” she said.

“We will do everything our power to be able to make some changes in that area and I will work in the months and years to come to make it so.”

Goodale said he had also spoken with Saskatchewan Premier Brad Wall about the lack of infrastructure in La Loche, in particular, as a possible reason why people may feel isolated, and said the tragic shooting has focused a light on problems in the community that need to be addressed.