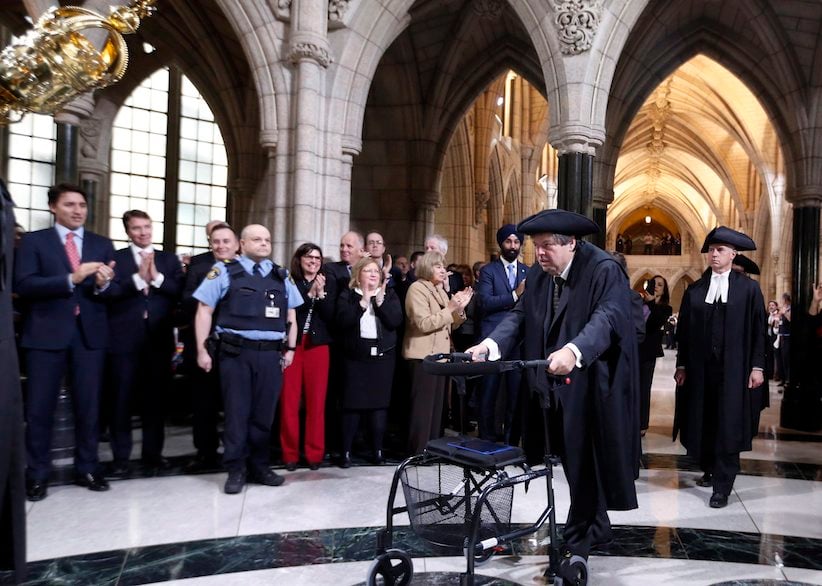 Liberal MP Mauril Belanger makes his way to the House of Commons as he takes part as House of Common Speaker in the Speakers Parade as Prime Minister Justin Trudeau and other Memebers of Parliament look on look on Parliament Hill, in Ottawa, Wednesday March 9, 2016. THE CANADIAN PRESS/Fred Chartrand

OTTAWA — Prime Minister Justin Trudeau is urging Canadians to donate to research into Lou Gehrig’s Disease as the House of Commons pays a unique tribute to one its own ravaged by the devastating disease.

Veteran Liberal MP Mauril Belanger was appointed unanimously by his peers to sit briefly as honorary Speaker, the first time such a distinction has been accorded to anyone.

Trudeau was among the cabinet ministers, MPs, senators, Parliament Hill staff, family and friends who lined the corridors of Centre Block to applaud and cheer as Belanger, clutching a walker, marched laboriously in the traditional parade from the Speaker’s office to the Commons.

Mauril Bélanger, who took the Commons Speaker's chair today, is an example of courage and determination. #cdnpoli pic.twitter.com/hmyDcMtVfn

No longer able to speak, Belanger used a tablet computer that converted pre-programmed text into speech to open today’s sitting of the Commons, with a prayer and the singing of O Canada.

He also presided over members’ statements and the opening round of question period, which Trudeau, Conservative interim leader Rona Ambrose and NDP Leader Tom Mulcair used to praise Belanger’s 21 years of public service and pledge support for ALS research.

.@Mauril_Belanger, your courage is an example for all Canadians. Great to see you in the Speaker's chair today. pic.twitter.com/QSnuVJLcIq

A standing ovation for @Mauril_Belanger as he leaves the Speaker's chair #cdnpoli pic.twitter.com/HuQ1EEYf2r