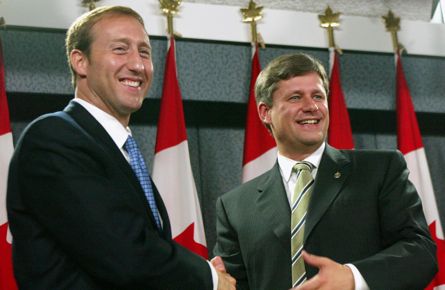 The most interesting sentence in Chantal Hébert’s column this morning is this one: “At 42 per cent, the combined Liberal/NDP score just about matches the Liberal result in Quebec in the last Chrétien campaign in 2000.” That’s what a divided opposition looks like. That spectacle was familiar to Jean Chrétien, who won three majorities against a divided opposition; and it is familiar to Stephen Harper, who repaired the divisions that helped Chrétien and worked hard at aggravating divisions among Liberals and between the Liberals and the NDP.

Chantal’s point is that the NDP and the Liberals are cannibalizing each other’s votes in Quebec, to the Bloc’s advantage. Her point in any other province could have been, and sometimes lately has been, that the NDP and Liberals often cannibalize each other’s votes in other parts of the country too. Her remedy, and she has been strikingly insistent on this point, is that Jean Chrétien and Ed Broadbent had a point several months ago when they started agitating for a formal merger of those two opposition parties.

I think she has a point. As is often the case, history offers great big neon-bright lessons written in letters 14 feet high, which are nonetheless apparently easy to forget.

The Liberals are hoping that carefully chipping away is the route to power. “Politics is a game of inches,” Michael Ignatieff told reporters from the Maclean’s Ottawa bureau during a dinner meeting several months ago. He mimed inching forward up a steep slope, inch by precarious inch. Then — he really is very good at self-deprecating humour — he mimed plummetting backward into an abyss. But never mind the plunge into the abyss. Canadian politics in my lifetime has actually very rarely been a game of inches. Yes, political parties are well-advised to try to win each day’s news cycle, so their credibility doesn’t slowly erode and so they are well-placed to take advantage of the next tectonic shift. But big changes in Canadian politics are more often the result of similar tectonic shifts.

How did Stephen Harper become Prime Minister? Sure, he’s perceived by millions of Canadians outside Ottawa as blandly pleasant, sympthetic to ordinary people and generally competent. He runs a tight communications ship. He often wins the news cycle. But if he had done all of those things as leader of the Canadian Alliance, running against a reasonably viable Progressive Conservtive party featuring Peter MacKay, Jim Prentice, Loyola Hearn and Maxime Bernier, he’d have maybe 70 seats today. More likely he’d be an ex-politician by now. He won because he bet everything on his ability to merge his party with the party he had entered electoral politics to fight, the heirs of Joe Clark and Brian Mulroney. And on his ability to win that party’s leadership, and to limit the exodus of rock-ribbed Reformers and centrist Progressive Conservatives from the new organization. Suddenly Liberals like Joe Jordan who’d hung onto marginal seats thanks to a divided opposition were toast. The advantages of incumbency shifted to the Harper Conservatives, which means it will always be harder to defeat him than it would have been to keep him from winning.

How did Jean Chrétien become Prime Minister in 1993? Sure, he re-asserted his party’s credibility among working-class voters after seven years of John Turner. But that’s not how he picked up 94 seats. Mostly he benefited from the collapse of the Mulroney coalition into three discrete parties, the PC, Reform and Bloc Québécois. (That collapse began early. The founding Reform convention in Winnipeg happened three years after Mulroney won the largest majority in Canadian history.)

So Chrétien wins because the conservative coalition collapses and Harper wins when it is durably rebuilt. You have to go back to Mulroney’s election in 1984 to find an opposition party winning durable victory in the absence of a structural realignment of the party system. But that election happened during a time of political turbulence that simply has no parallel today. Between Trudeau’s last election in 1980 and the rise of Mulroney, Canada went through the first Quebec referendum, the repatriation of the Constitution after a gruelling series of first ministers’ meetings, and the National Energy Program. Oh, and the replacement of the incumbent prime minister by a profoundly shaky semi-retiree whose ambitious opponent refused to stop plotting behind his back.

Today’s politics simply has no equivalent set of circumstances.

So. To sum up: outside the Joe Clark blip, you simply don’t get a durable change in power in today’s Canada without a structural realignment of the party system, or a period of political upheaval so drastic as to resemble a structural realignment. Stephen Harper is running full-time against a quasi-imaginary “coalition” because he gets that. He saw, in December 2008, that the NDP leadership gets it. He knows that elements within the Liberal party, currently largely discredited, get it. He needs to scare Michael Ignatieff off the structural-realignment dime if he is to hold power. Fortunately for him, the prime minister’s task is not particularly difficult.