How Chrystia Freeland sees trade talks in the Trump era

With the Bombardier-Boeing battle casting a dark shadow, the foreign minister frames the 'unconventional' Trump factor 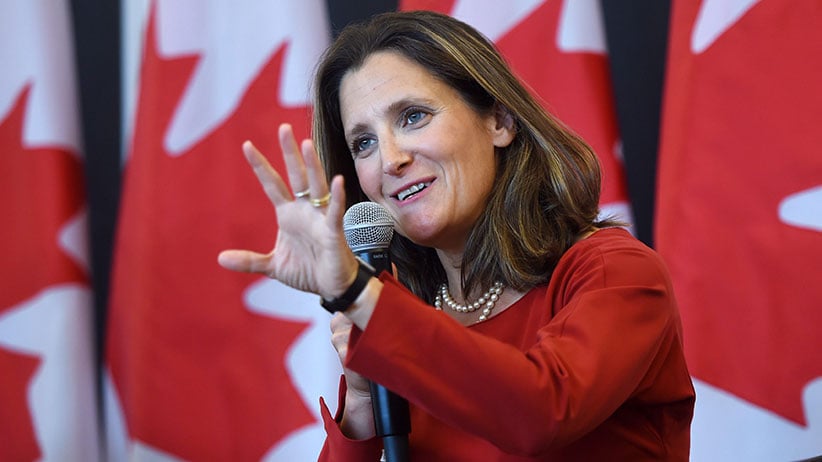 The prospect of an aerospace trade war between Canada and the U.S. loomed over the third round of NAFTA negotiations, which wrapped up in Ottawa Wednesday afternoon. Despite a threat by the U.S. Department of Commerce to slap a 219 per cent countervailing duty on jets made by Montreal’s Bombardier, however, Canadian Foreign Minister Chrystia Freeland was resolutely upbeat when she faced the media.

“Look, I do want to remind Canadians that aggressive actions and aggressive decisions by Commerce are nothing new. They are certainly familiar to us from the softwood lumber dispute, and anyone who doubts that Commerce can be aggressive when it comes to the aerospace industry should give Airbus a call. This is familiar and accustomed behaviour. And, when it comes to Bombardier… this is just the first step in a much longer process.”

“Our officials in the [Global Affairs] department, when they prepare memos for me, describe this U.S. administration as unconventional. And I think that is a really good adjective. I do think that that this U.S. administration has been clear, during the election campaign and from the time it came into office, about its objectives and its beliefs about trade… Canada does not share the view that deficits or surpluses are the best way, or even a good way, of measuring whether a trade agreement works… It is also relevant that the United States in its trade with Canada has a slight surplus.”

3. But Canada has to assume that a NAFTA deal with Trump isn’t impossible.

“I don’t have a super power which allows me to divine the motives of our partners apart from what they say. I certainly know that as far as Canada is concerned we approach these negotiations absolutely in good faith. We believe that this is an agreement that can be modernized and can be improved for everyone.”