How close did the Liberals come to losing?

Justin Ling: Focus groups of Liberal supporters after the Sept. 20 vote show there was dissatisfaction with what was being offered by the party 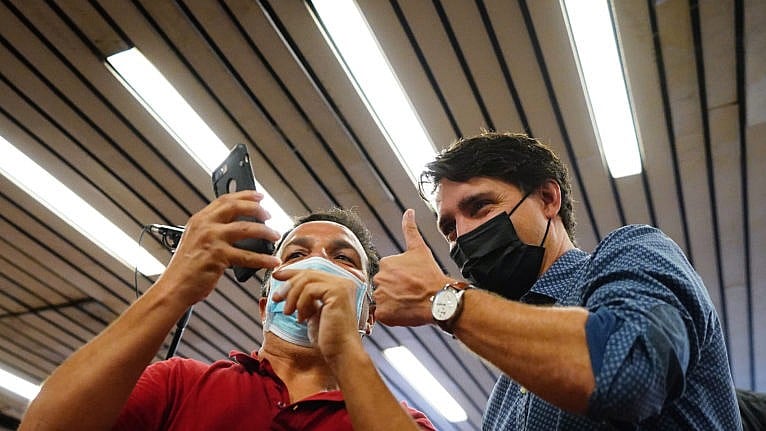 Trudeau poses for a photo as he greets commuters at a Montreal Metro station on Sept. 21, 2021 (Sean Kilpatrick/CP)

The Liberal Party’s pyrrhic victory in last week’s federal election may have been closer to a defeat than the final tally would suggest.

According to interviews with Liberal supporters conducted after the Sept. 20 vote, voters were less than enthusiastic about staying with Justin Trudeau’s party—but his oft-touted childcare plan may offer some clues as to why they did.

“The COVID pandemic fundamentally altered the psyche of the Canadian voter,” reads a memo prepared by a consulting firm, which conducted 10 focus groups across the country in the days after the election.

The focus groups were conducted for a number of industry groups and companies, and not paid for by the Liberal Party. The source who provided the results asked that Maclean’s not identify the firm that conducted the research, because it was not yet meant to be shared publicly.

In those conversations, the voters were keen on the idea of, as Trudeau phrases it often, “building back better.” They were receptive to new programs, new entitlements, and new federal mechanisms to address a raft of issues: Chief among them, a rising affordability crisis, income inequality, and climate change. The deficit seemed like a far-off concern, though the firm found support for the idea of making big companies and the rich pay their “fair share.” There was clearly a liberal attitude in the voting public.

But the focus groups found a chasm between those voters’ wants, and what was being offered by the Liberal Party.

“Voters want tactile, comprehensible proof of action—things that they can see or touch: an electric car, not a price on carbon; a $10 daycare around the corner from their house, and not an agreement-in-principle to hire more daycare workers,” the summary reads.

On climate change in particular, the consultants found “there was no doubting the emotional intensity of voter concern about this issue. Yet almost no one gave Trudeau credit for the hard-fought price on carbon; the existence of a soon-to-be-tripled cheque rebate also went unmentioned.”

But voters were not clueless, by any measure. Some referenced a recent Intergovernmental Panel on Climate Change report, which offered dire warnings over the need to act quickly to avert the most destructive effects of climate change, even in the short term. Many were enthusiastic about drastic action.

“I would like to see us lead rather than even just trying to keep…the status quo,” one Toronto voter said.

One word that kept coming up: “Invest.” These Liberal voters were fairly blunt: Canada should be putting money into the companies, whether they be start-ups or existing oil-and-gas firms, that can innovate efficiencies. “We just wasted 600 million bucks on an election,” one voter said. “I’m sure we can spend $600 million on investing in different types of companies.”

The report notes that a general skepticism or indifference towards the Liberals’ record may “present an opportunity for the right actor to tap into this sentiment.” Who that actor will be remains to be seen—in the recently-concluded campaign, the Conservatives’ climate plan used the right language but offered a farcical set of solutions; while the NDP and Greens offered soaring targets and no coherent plan on how to reach them. Climate expert Mark Jaccard assessed that, even if the targets were more modest, the Liberals’ plan was the most credible of the lot. Voters seemed to be looking for ambition and credibility, in equal measure.

One of the most insightful takeaways from the consultants’ study was around affordability—particularly a hot, increasingly inaccesible, housing market and spiking gas prices.

“The major party platforms nibbled around the edges of the basket, but with no leader successfully addressing this issue head-on, the electorate chose to reward none of them,” they warned.

Affordability and inequality have crashed together in a particularly poignant way during the pandemic. As one small-business-owner voter explained: “We’re the hardest hit. And when you look at how ridiculous a lot of the restrictions were, like your basic mom and pop shops closed down and Walmart, or Costco or stayed open.”

There may have been an opening there for the other parties, but they clearly did not succeed in getting that point across. “Banks … saw their shares increase, they saw their dividends increase, even though they took wage subsidies and business support subsidies,” one Ontario voter said. “So I think that was a misstep by the government.”

If the Liberals can claim one success from the campaign, it would be childcare. The consultants called it a “universal hit” with voters in their focus groups.

“Success on this file looks similar to cannabis: at a hyper local, neighbourhood level, Canadians can see that was a promise made and promise kept,” the consultants noted. “If, by the time this voter returns to the polls, the Liberals have not delivered on childcare, then they will face trouble.”

One Alberta voter (who doesn’t currently stand to benefit from the program) told the consultants that Trudeau’s childcare pledge was “by far and away was the big one for me, in terms of policy.” An Ontario voter seemed incredulous at the Conservatives’ alternative: A new refundable tax credit. “Do they know the $10 a day daycare helps a ton?” The voter wondered aloud.

But there is a pitfall there for the Liberals. Under their agreements—which they’ve signed with all provinces and territories, save Alberta, Ontario, and New Brunswick—fees will be slashed by next year, but the promised $10-a-day pledge won’t come into force until 2026.

Trudeau’s third victory, even if it was at a high cost for no great reward, does show the strength of his connection with an entire chunk of voters—even if their patience is wearing thin.

“As a single working mom, the Liberals have changed my life. I feel a real loyalty to them,” one voter told the focus groups, hailing from a B.C. riding the Liberals narrowly kept. “I feel like we’ve been cared for, and I want Trudeau to keep on track with working families.”

I put some of these findings to Lenore Zann, a rare Liberal who lost her seat in September—falling behind the Conservatives in the semi-rural Nova Scotia riding of Cumberland—Colchester.

“The COVID lockdown, it’s made people angry,” Zann told me. “People are so quick to anger these days…And that has also affected the way people think and whether they want to be bothered voting.”

To some degree, Zann’s assessment is pretty bog standard for a political venture that didn’t go according to plan—voters just didn’t get the message. She’s been there before: Provincially, she was elected as a New Democrat when her party rose to its first-ever victory in 2009, only to be turfed four years later. (Zann was one of seven New Democrats to keep their seats, which she resigned in 2019 to run for Trudeau’s Liberals.)

Zann likens governing as a progressive to captaining “a great big huge ocean liner that’s speeding along—and you’re trying to change it, you know, without tipping the whole thing over.” From childcare to their climate plan, she was surprised to see voters neither enthused about the Liberal record, nor excited about the roadmap for a planned-for majority government.

In our conversation, though, Zann started to sound like some of the Liberals in those focus groups.

“Having been on the inside, believe me [COVID-19] suddenly had to take over everything. We had to put aside personal projects that we wanted to see happen and just make sure that people’s lives were saved,” she said. In recent months, as vaccines have been deployed across the country and a light at the end of the tunnel emerged, she says the mentality has changed: “Suddenly, it’s like, oh my god, we have to now put all these resources to all these other things.” At the same time, she notes, the inequality between those who suffered the most during the pandemic and those who have amassed a dizzying new amount of wealth, is increasingly stark.

Where the Liberals appear to have failed is convincing Canadians that they have reallocated those resources to the right things, in proper measure.

Paul Wells recently made the case that this election was folly precisely because it interrupted the kind of work that Trudeau continually insists is urgent, necessary, and important. I think these focus group Liberals would agree: They want the government they’ve got, not the one Trudeau wants, to get cracking on it.

Zann leaves behind unfinished work that her government ought to pick back up. She introduced private members’ legislation to require Ottawa develop an environmental racism strategy—taking into account the disproportionate impact climate change could have on racialized and Indigenous communities. That bill, like many others, died when an election was called.

All told, the focus groups offer a rare and intimate look at why people voted the way they did. They show that, even if voters aren’t necessarily consuming and digesting the messages packaged for them by the campaigns, they are—generally—taking the time to read the platforms, get their head around the issues, and kick the tires on each party. Policy does, in fact, matter. But if Trudeau can’t get a plan together to match action with his soaring rhetoric, and someone else can, these voters are unlikely to remain loyal for long.