How does a plastics ban work when the world needs it more than ever? 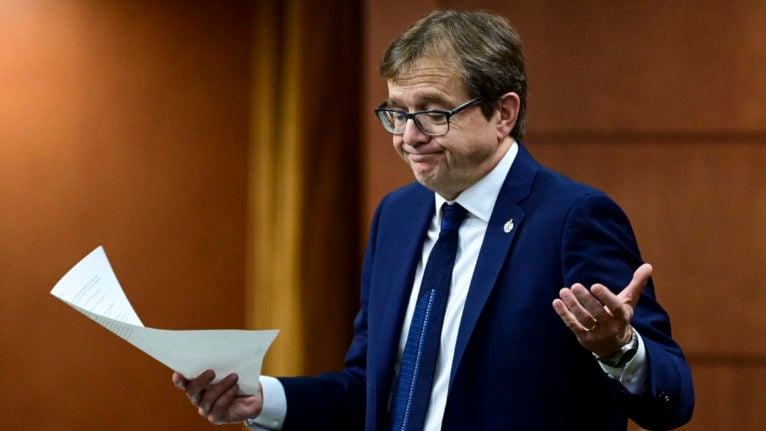 Minister of Environment and Climate Change Jonathan Wilkinson answers a question during question period in the House of Commons on Parliament Hill in Ottawa on Tuesday, Oct. 6, 2020. (Sean Kilpatrick/CP)

In the middle of a pandemic, Jonathan Wilkinson remains undeterred. A promise is a promise, and so the Liberals are pushing ahead with a plan to ban single-use plastics by next year. Yesterday, Wilkinson announced the first tranche of to-be-banned items—namely, plastic checkout bags, straws, stir sticks, six-pack rings, cutlery, and “food ware made from hard-to-recycle plastics.” Last year, when government-commissioned pollsters cast about for Big Issues on Canadians’ minds, a plastics ban was a popular idea. Now, of course, disposable plastic in the form of PPE is vital to our collective survival.

Tory MP Dan Albas was the designated opposer of today’s news. He said a ban will put people out of work and raise costs for other businesses. “Plastics are what is keeping family owned restaurants open and residents of long-term care homes safe,” he said. “Replacement products will be yet another cost for thousands of small businesses across Canada.” Wilkinson says the banned items represent just “a fraction of … one per cent of the products.”

On the way into his party’s weekly caucus meeting, Tory leader Erin O’Toole said he’d allow his MPs to vote their conscience on both medical assistance in dying and a ban on forced conversion therapy. O’Toole told the Commons that he personally supported an end to conversion therapy, but former leadership candidate Derek Sloan campaigned against the bill. The leader was concise on his way out: “We had a good meeting today,” he said. “It was a great one.”

Yesterday was a busy day for Yves Giroux and the merry band of number-crunchers at the Parliamentary Budget Office. The PBO released costing estimates for four pandemic recovery benefits, a federal dental care program and tax-free seniors benefits.

A fed-prov proxy war: Recall the Alberta government’s pro-oil patch “war room,” a $30-million-a-year “independent corporation” known as the Canada Energy Centre that unabashedly champions Canadian industry. Well, the feds just launched a website for the conspicuously titled Canadian Centre for Energy Information, marketed as a “convenient one-stop virtual shop for independent and trusted information on energy in Canada.” Both operations claim to be “independent.” You be the judge.

This month’s Maclean’s cover stories peer into two possible futures: one in which President Donald Trump loses his bid for re-election, and another that sees him win four more years in the White House.

What if Trump loses? If the incumbent president does let go of the White House after losing the election, writes Paul Wells, a new day in America isn’t as easy as flicking a switch. All the current problems will remain, and a President-elect Joe Biden—a proud unifier of people—likely won’t have the solid backing of much of his Democratic Party. But if Biden wins, he at least gets to try to govern:

The American project is always provisional, never set. Conceived in liberty, that radiant and lurid nation has often been tested, often found wanting. The paths it finds through each new fiery trial are beyond any one woman or man’s ability to wreck or redeem. But is the quest still worth it? Is the flag still there? Maybe. That’s the hope that will guide Joe Biden, if he gets his chance.

What if Trump wins again? If everyone’s vote is allowed to count, writes David Frum, the president is “doomed.” His only path to victory is to “stop the voting, stop the count, and then rely on the weird mechanics of the U.S. Electoral College to save him.” But a Trump victory produces six what-if scenarios that take the world to a dark place:

What happens if Trump wins? The democratic idea loses. The world trade system loses. Collective security against authoritarian threats from Russia and China—that loses, too. Anybody of a mind to chuckle, point or condescend—after your first few moments of feeling superior—you lose, too. The whole world thrives or falters according to whether the United States thrives or falters. If Trump wins, that experiment falters—maybe not forever, because nothing is forever, but for a dangerously long time.

A call to end racism in health care: It’s time for a reckoning, writes Jane Philpott in Maclean’s. The former health minister, who’s now the dean of the Faculty of Health Sciences at Queen’s, argues for “comprehensive and collaborative cultural transformation” in how this country trains health professionals.

I wish I could say with certainty that the death of 37-year-old Joyce Echaquan will be a wake-up call for health systems in Canada. It should be. But history gives us no confidence to make such a claim. Joyce Echaquan is not the first person to die as a direct or indirect result of racism in Canadian health care systems. Tragically she won’t be the last. But her death comes at a point in our history where Canadians may be more attuned to the dangers of systemic racism than we were, for example, when 45-year-old Brian Sinclair died in a Winnipeg hospital in 2008. We must seize this moment in history and act to prevent more senseless deaths.

Pandemic priorities: As a second wave of COVID-19 starts to infiltrate long-term care homes in Ontario, Progressive Conservative MPP Jeremy Roberts tabled a bill that would officially make daylight time permanent in Ontario. Should the bill pass—and 680 News reports it has government support—Ontarians would still change their clocks this November. The law won’t come into force unless or until New York and Quebec make similar moves.