How many times did Jody Wilson-Raybould need to say 'No'?

Anne Kingston: Powerful men repeatedly refused to accept Wilson-Raybould's authority. This isn't a 'he said, she said.' It's a 'he, he, he-said.' 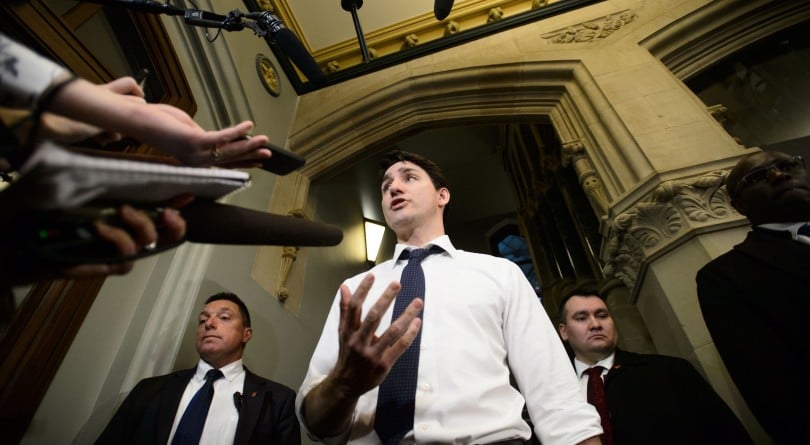 Trudeau arrives to a caucus meeting on Parliament Hill in Ottawa on Wednesday, Feb. 20, 2019. (THE CANADIAN PRESS/Sean Kilpatrick)

Update: On Feb. 27, 2019, Jody Wilson-Raybould testified during an extended opening statement to the House of Commons justice committee. Read the full transcript of her statement here.

Since its outset, l’affair SNC-Lavalin has been framed as a “he said, she said.” More accurately, the messy scandal arising from allegations that the PMO pressured then-justice minister and attorney general Jody Wilson-Raybould to give a prosecutorial break to the powerful Quebec company has been a “he, he, he-said,” while “she” consults with her lawyer about how much she can say.  We’ll learn the answer to that next week when Wilson-Raybould speaks before the House justice committee.

Even before her testimony, however, an eerily familiar tale has unfolded, the last chapter in the spell-binding spiel from Michael Wernick, clerk of the Privy Council, this week before the justice committee. And that’s the spectre of powerful men not used to hearing “No,” not willing to accept “No,” doggedly pushing for a “Yes” from the person who ostensibly determines consent, then gaslighting her when they don’t hear it.

Through it all a question emerges: How many times did Jody Wilson Raybould need to say “No” before she was heard?

The matter involving SNC-Lavalin’s bid for a deferred prosecution agreement (DPA) was settled, theoretically, on Sept. 4, when Kathleen Rousell, the director of Public Prosecutions, informed the company in writing it would ineligible for a remediation agreement as part of a DPA, and thus would have to stand trial on charges it had engaged in bribery and fraud in Libya. As attorney general, Wilson-Raybould could have overruled the prosecution service, and thus preserve SNC-Lavalin’s unfettered access to billions in government contracts. She did not. That was a “No.” Assuming a “No” is final in this setting, however, is to naively underestimate the determination and the clout of the Montreal construction giant that lobbied so effectively to have deferred prosecution agreements passed into law last year.

Not even two weeks after the decision was made, on Sept. 17, Wilson-Raybould discussed the SNC-Lavalin file with the prime minister. As Trudeau reported it, the attorney general felt the need to ask him whether he planned to tell her what to do concerning the prosecution. Any decision “was hers alone to make,” Trudeau told her, a bit of moral suasion familiar to any parent.

The next day, Sept. 18, SNC-Lavalin, clearly not about to take the prosecutors office’s decision, nor Wilson-Raybould’s decision not to overrule it as a “No,” met with Wernick and Finance Minister Bill Morneau to discuss “justice and law enforcement.”

Another letter from Rousell to SNC-Lavalin, this one dated Oct. 9, confirmed again in writing that the company will not be invited to negotiate a remediation agreement. The next day, Oct. 10, SNC-Lavalin issued a news release to say it strongly disagreed with the director of prosecutions’ position and remained open and committed to negotiating a remediation agreement.

Exactly who it would negotiate with was unclear. What we do know is that between early October and Nov. 19 SNC-Lavalin met with two different senior PMO advisors— Elder Marques and  Mathieu Bouchard— to discuss “justice and law enforcement.” Visits by SNC-Lavalin lobbyists to the PMO would total 14.

The trees turned colour, leaves fell, chill filled the air, and Jody Wilson-Raybould was still talking about SNC-Lavalin at a Dec. 5 lunch at the Chateau Laurier with Gerry Butts, who has said he told the then justice minister to talk to Wernick.

Wernick revealed this week that he raised the issue of SNC-Lavalin during a Dec. 19 conversation with Wilson-Raybould. He conveyed to her that the prime minister and others were “quite anxious” about the possible economic consequences if SNC-Lavalin were found guilty. That is understandable. Lavalin is a major employer in Quebec. But the law bars prosecutors from considering the national economic interest when they consider offering deferred prosecution to companies charged with bribing foreign officials. Wernick employed a too-big-to fail rhetoric, expressing concern that the board might decide to “close, sell” the company which “would have consequences for 9,000 Canadians, plus the suppliers, plus the pensioners, plus all the communities in which the company’s active.” And the company’s “share price had tanked,” he said.

In all of those conversations “there was no inappropriate pressure put on the minister at any time,” Wernick said.  Even more risible was a comment he’d make later in a scrum with reporters when asked why he’d continue to contact the attorney general three months after a decision had been made: “Because the decision had not already been made,” he said.

We’re talking Grand-Master-Jedi-level gaslighting here. Clearly the “No” registered on the SNC-Lavalin DPA on Sept. 4, Sept. 17, Oct. 7, Dec. 19 did not register as an actual or final decision. As for pressure? She must be imagining things! After all, the decision was Wilson-Raybould’s alone to make. And the insurance kicker:  If Wilson-Raybould did feel she was being pressured to override the decision to prosecute, it was up to her to protest to the very office applying pressure, or resign. If she didn’t, well, it’s nobody’s fault but hers. Her behaviour is the problem. As I said, it’s an age-old template.

As for “How many times did Jody Wilson Raybould need to say ‘No?’ before being heard?” It’s a trick question. The correct answer: Zero.