How not to plot a political rebound, Jagmeet Singh edition 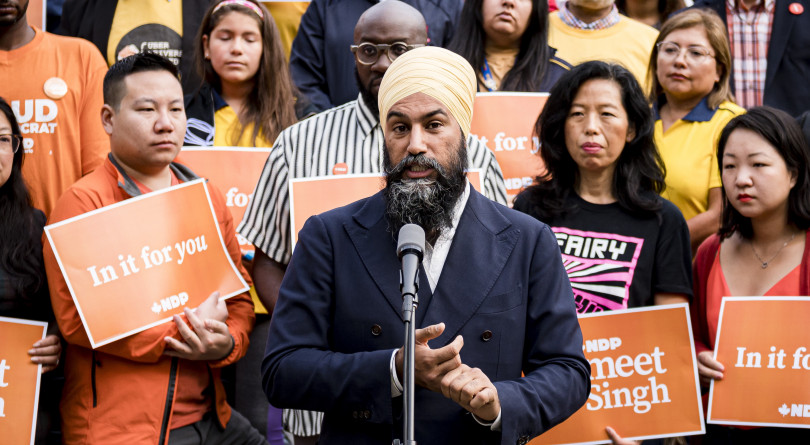 Singh tries to get back in it: Breaking from the directionally-themed campaign slogans chosen by the Liberals (“Chose forward”) and the Conservatives (“It’s time for you to get ahead”), the NDP revealed the tagline they’ll take to voters next month: “In it for you.” The announcement coincided with the launch of a French-language ad campaign in Quebec, where the NDP is facing an uphill battle to hold onto its 14 seats, in which Jagmeet Singh addresses head on his Sikh faith and turban in a province where the majority of the population backed legislation banning civil servants from wearing turbans, kippas and hijabs. The ad, which begins with a scene showing Singh’s long hair down before he wraps a turban around his head, can be seen here. (National Post)

It’s all part of Singh’s effort to revive momentum in his struggling campaign, and to that end he vowed to close the gap with the other parties in terms of the number of candidates the NDP has in place — at last count the party has candidates named in just 181 of 338 ridings. (The Conservatives are fully stocked while the Liberals have candidates in 276 ridings.) Visiting St. John’s, Singh said the party would boost its candidate count to 302 by the end of next week. (CBC News)

Not in it for him: But on a day choreographed by Team Singh to change the narrative around the federal NDP’s prospects, Elizabeth May’s Green Party hijacked the plot. A group of 14 New Brunswick NDPers as well as a member of the federal party’s national executive announced they’re ditching the Dippers and shifting their allegiances to the Greens. “In New Brunswick, the NDP does not have a path to victory,” said Jonathan Richardson, a member of the federal NDP election planning committee, to reporters. “There are no candidates for the NDP in New Brunswick or P.E.I. for the federal election. “I actually just received a call from the organizer, you know, pleading for my help to keep finding these candidates and I said, you know, at the end of the day this is the decision I’ve made.” (CBC News)

The news made May’s day: “It certainly puts more wind in our sails.” (CTV News)

Hey big spender: As David Akin, the one-man government-spending monitoring service notes, the Trudeau Liberals have blanketed the country with taxpayer dollars, focussing particularly on those parts of the country they’ll be targeting for votes. Last Friday Conservative MP Peter Kent lodged a complaint with Canada’s Elections Commission, accusing the Liberals of “criss-crossing the country making partisan announcements where they have been weaving campaign narratives into official government speeches and news releases.” Akin collated Trudeau’s summer of splurge, including 4,545 new spending commitments worth a combined $12.8 billion in August alone, and exactly where the money went. (Global News)

Stay on target: Picking up that thread at Maclean’s, former Conservative comms director Andrew MacDougall writes that with the Liberals stacking the deck and pulling neck-and-neck with Andrew Scheer’s Tories, the Conservatives need to stick to their campaign script of helping ordinary Canadians get ahead:

By appealing directly to voters with a paid message of empathy on the cost of living, the Conservatives are hoping to catch the eyes and ears of Canadians who are fed up with their politicians bickering about issues that are marginal to their bottom line.

In other words, the Conservatives are counting on people who feel the deck is stacked against them not caring how the Liberals have stacked the deck to ensure their reelection. (Maclean’s)

A modest proposal: If Albertans want the rest of Canada to take their issues more seriously, they’ll have to do something even more radical than pushing for separation—they should stop voting Conservatives, writes Max Fawcett:

They don’t have to do that forever, mind you, and they certainly don’t have to vote Liberal. Asking an Albertan to vote for Trudeau in 2019 is a bit like asking an ardent Hillary Clinton supporter to vote for Donald Trump in 2020. But as long as Albertans reflexively vote Conservative at the federal level, they are inviting said federal Conservatives to take their votes for granted and focus on winning the ones in relatively vote-rich Quebec and Ontario. Stephen Harper’s tenure as Prime Minister offers a useful illustration of that. (Maclean’s)

Click the down arrow next to the tweet and then “delete”: No, Britain is not planning to send convicted child-killer Jon Venables to Canada to save money, as first erroneously reported by U.K. tabloids, and yes, Scheer’s tweet implying that under Trudeau, Canada would be a “dumping ground for murderers, terrorists, and perverts” still remains online. (Canadian Press)