How Ottawa got its groove on. No, seriously. 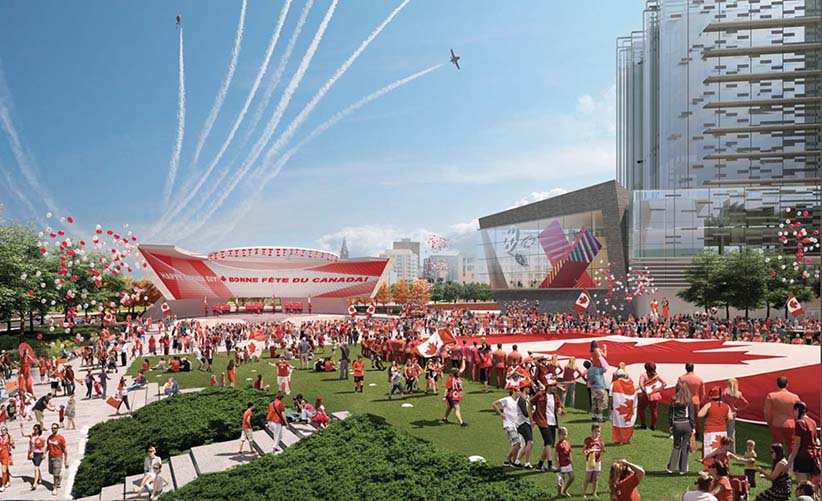 Much of what makes Ottawa annoying is on its way to being fixed. The city, I mean: if you’re annoyed by Ottawa as a set of ideas about how Canada should be governed, I can’t offer much hope. But as a place to live and visit, lately each year is better than the last.

Sparks Street had long been a forest of construction cranes. It’s looking good, its government buildings buffed and its private commerce more energetic. Parliament’s West Block, a dingy heap of stonemasonry when I moved to Ottawa, has been polished until it would make you proud. Soon a glass dome will cover its courtyard so MPs can debate there, while work crews renovate the stately Centre Block itself. Over the same period, senators will move across Wellington, to the long-abandoned train station, to do whatever it is they do.

Grotty Rideau Street is being repaved in stages. The big mall there is completing a quarter-billion-dollar improvement. Ground will be broken next week on a $110-million facelift for the National Arts Centre. Light rail stations are going up across the city. Any day now the mayor, Jim Watson, will visit the long-abandoned old U.S. Embassy, with three ministers from the Trudeau government, to brainstorm a new cultural vocation for an elegant old building that has been dormant for 16 years.

Taken together, it’s a modest renaissance for a modest city. There remains one big mess: a huge barren field only a few blocks west of Parliament. This is the grandly named LeBreton Flats. It was the industrial heart of dirty old Ottawa. For 40 years it has been nothing much. The ground is contaminated from the heavy industry that used to be situated there, and from the mountains of snow that city crews dumped there later.

In the last decade, civilization has begun creeping back. Results are mixed. A big and well-run Canadian War Museum opened in 2005. Condominium towers have gone up at the flats’ east end, but no business or pedestrian traffic enlivens the neighbourhood. Most of the field is still just field.

Now the National Capital Commission, the often inscrutable federal agency that controls this real estate, is running a competition to see who will get to build on this land, so blighted and so full of potential, a stone’s throw from the parts of Ottawa the tour groups visit.

Six groups of developers entered the competition. Only two have stayed in through the bid process. Their proposals were unveiled to the public last month. As almost always happens when people are invited to discuss the future of their community, the debate has become one of the city’s most animated public conversations.

One bidder is, essentially, the Ottawa Senators. The NHL team has played for nearly 20 years in an arena in Kanata, more than a half-hour’s drive from downtown Ottawa. That was a mistake the Sens want to fix, and, under the name RendezVous LeBreton Group, they propose a new arena at LeBreton Flats, surrounded by sleek condominium towers.

The other group, composed of developers from Ontario and Quebec who are using the name LeBreton Re-Imagined, surprised many observers by announcing they want to build an arena too. But their proposal also includes a bandshell much like the one at Chicago’s Millennium Park, along with a handful of new museums and a central boulevard that the group’s architect, Richard Brisbin, describes as a “mash-up” of ceremonial boulevards in New York City (the new High Line park), Paris (the Tuileries Garden) and elsewhere.

I gave Brisbin a call because I’ve long admired his work. I like the LeBreton Re-Imagined bid, which keeps most of its condos across the street from its grander public spaces. But much of the conversation in Ottawa assumes this bid is the underdog, because Sens owner Eugene Melnyk is adamant he won’t run his hockey club out of their arena if they beat him. If you want hockey downtown, the easiest way to do it is to let Melnyk win.

This kind of talk drives Brisbin politely mad. “Hockey couldn’t be in better hands. If Mr. Melnyk wins, hallelujah. If Mr. Melnyk doesn’t win, hallelujah. There’s a team here, we’re ready to sit down with them.” Melnyk’s competitors are even willing to buy the Sens, if it comes to that. Melnyk insists they’re not for sale.

But hockey, meanwhile, is only “41 nights a year,” Brisbin says. For the rest of the year, he’s taken his cues from what the NCC asked for in its request for proposals: “a memorable capital landmark development … [with the] highest quality of architecture and sustainable design.”

Brisbin believes he’s delivered. “Our first phase has an elementary school, it’s got a YMCA, it’s got a seniors’ development, a daycare. It has some of the most successful Ottawa businesspeople, retail and otherwise, as ground-floor tenants. It’s got a little farmers’ marché and piazza.” The big stuff—the arena, the bandshell—would come later, but that’s a sturdy anchor to start.

The NCC has retained Jack Diamond, the fiercely demanding Toronto architect, to help evaluate the bids. We should know who’s won by year’s end. In the meantime, simply having the competition has raised Ottawa’s standards, and its hopes.