How police use the gun registry

There are 3.4 million reasons against scrapping the gun registry 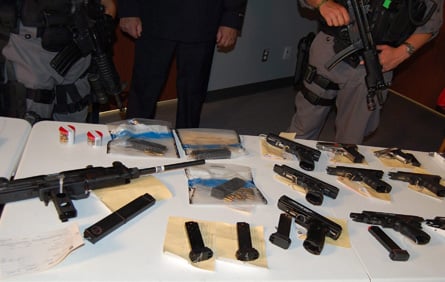 Prime Minister Stephen Harper’s decision to try for a third time to scrap the gun registry has been cast by Conservatives as a cultural question, a matter of understanding rural Canada, in particular the way folks outside the big cities use their rifles and shotguns.

But there’s another gap of understanding that I would argue is more important in getting a handle on this debate: grasping how police use the gun registry. If there’s a case for keeping the registry, it must rest on how useful the database is to police, especially when a cop has to venture into a potentially dangerous situation.

So I asked the RCMP, who were made responsible for the Canadian Firearms Program back in 2006, and they provided up-to-date statistics. In 2008, police across Canada used their computer systems, often terminals right in their patrol cars, to pull information from the Canadian Firearms Registry On-line over 9,400 times a day.

That adds up to a staggering 3,438,729 queries from police officers last year. It’s hard to imagine a federal database more intensively mined.

I asked a veteran officer in an informal conversation to explain how the system is typically used. He said a cop called to domestic dispute will routinely conduct a quick computer check to see if there is a licensed gun owner at that address, and find out exactly what guns are registered there.

It’s not hard to imagine how discovering that a resident owns a single hunting rifle might suggest one thing to an officer; finding out the man causing the disturbance possesses several exotic weapons would indicate something else again.

Police also use the registry to conduct so-called reverse checks; in cases where they recover a gun, perhaps from a crime scene, they check on who is the registered owner. Those in favour of scrapping the so-called long gun registry make a point of stressing that, even without it, police would still be able to check out who has a licence to own guns. But that wouldn’t be any help when the cops are working to trace the ownership of a specific firearm that turns up in an investigation.

A few statistics help round out the picture of how the online data is used. Police most often plug a name into the system to find out if that person is a licenced gun owner and what registered guns the individual owns. They made that sort of query more than 2 million times last year, so often that this has obviously become very basic step in Canadian police work.

The next most common sort of data search involves checking to see if guns are associated with a certain address. Police made address queries more than 900,000 in 2008. They checked serial numbers on firearms 74,103 times. They also, less frequently, search for data by entering company names or telephone numbers of potential gun owners.

Is it possible that police have fallen into the habit of using this system so very often for no good reason? I don’t think so. Millions of data searches must turn up thousands of pieces of useful information. So, in considering the bill introduced yesterday in the Senate to eliminate the gun registry, you must balance the loss of information police evidently want to have, and make a point of obtaining millions of times a year, against the benefit of relieving honest gun owners of the minor inconvenience and expense of registering.

In his March 21 speech to the Ontario Federation of Anglers and Hunters, Harper spoke of this debate in terms of an urban-rural divide. “The leaders of the opposition parties continue to be against this,” he said. “But there are MPs in all these parties that know what we know, that law-abiding hunters and farmers are not part of the crime problem.”

The Prime Minister is tapping something deeply felt here. Where I grew up in Northwestern Ontario, most households had guns and I’m sure most hunters these days still resent having to register them. (They don’t like filling out their income tax returns, either, or affixing the little renewal sticker to the corner of their licence plates, but they’ve gotten used to it.)

For my sins, I’ve lived in cities for a long time now and drunk my share of low-fat lattes. My recollection of the general perspective of the hunters I’ve known, though, is that they tend to respect police, and I doubt they would really begrudge cops a tool that gives them a little extra information, maybe a bit of an edge, when they’re walking into, let’s say, a kitchen where a depressed drunk has been smashing up the cupboards.

You want to know if that guy has a gun.

The following tables show police access to the Canadian Firearms Registry On-line (CFRO), for 2008 (by quarter).

The table below shows CFRO access, by province/territory for 2008.