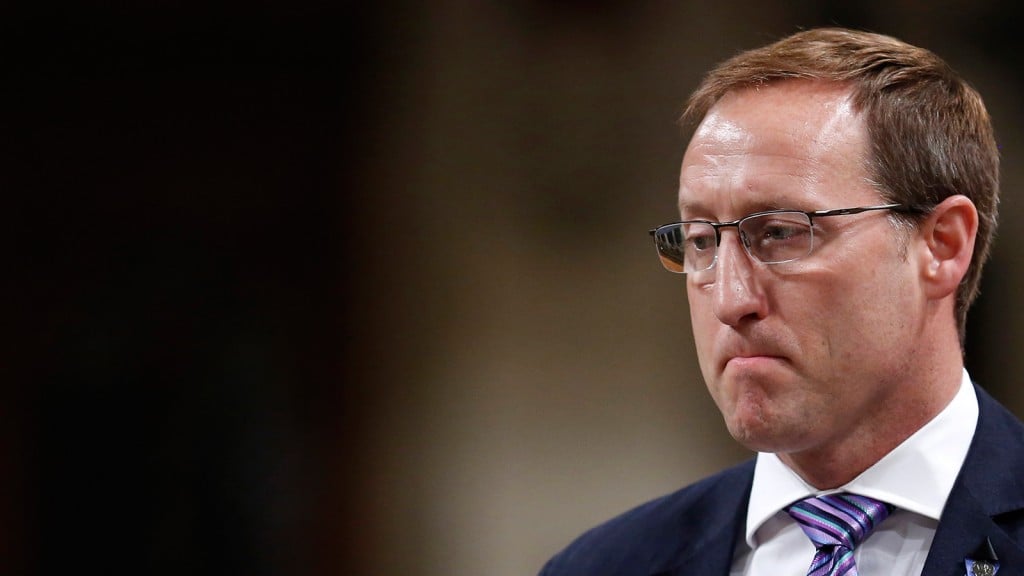 Peter MacKay was a parliamentarian of bold suits and tartan ties, the sort of get-ups that exude confidence in a House of Commons where a pinstriped suit and a double Windsor knot stand out among the predictably drab attire of our elected commoners. MacKay, a Progressive Conservative backbencher who eventually served as Canada’s minister of foreign affairs, defence and justice, could use all the help he could get throughout his years in cabinet; the proud Nova Scotian son of Elmer, himself a Tory cabinet minister, waded many times through the muck of controversy. It always came to a head in the House, where he spent 18 years.

On supporting the troops

Every government loves to crow about what its opposition opposes. Conservatives have turned parliamentary voting records into gospel; they’ve nearly perfected the dark art of demonizing political foes for voting against the very things they claim to support. Tories table omnibus bills that amend dozens of laws, all at once, and the opposition refuses to provide its legislative blessing; for all the useful measures, they find plenty that they cannot support. The government feasts on those votes against.

In 2013, the NDP tried to pin then-defence minister MacKay to the wall by using the Tory trick against him. MP Nathan Cullen recalled MacKay’s voting record on the opposition benches. “Lo and behold, it turns out he repeatedly voted against the military,” said Cullen, who listed all of the perfectly benevolent spending measures that MacKay couldn’t support. “In 2004, he voted against $792 million for military operations in capital. He voted against $17 million for the St. Anne’s veterans hospital and against $600,000 for war veterans.”

Isn’t it possible, Cullen wondered, for parliamentarians to vote against a government agenda but still support the troops? MacKay wouldn’t take the bait, but he was sufficiently distracted to let loose a verbal slip. “Mr. Speaker, let me get this straight,” he said. “This member is now suggesting that because, while in opposition, this NDP government continues to oppose the unprecedented and—”

At that point, the jubilant NDP benches jumped to their feet and applauded. MacKay could only hope the New Democrats never tried the same thing again—and, to date, they haven’t.

On a rejected Supreme Court appointment

NDP Leader Thomas Mulcair spent part of May 2014 accusing MacKay’s office of meddling in the affairs of the Supreme Court of Canada. Mulcair and MacKay, both lawyers in another life who know a few things about judges and benches and rules and whatnot, let loose duelling bouts of condescension in the parliamentary spotlight. On May 5, a Monday, they dared each other to read the Supreme Court Act and accused each other of not understanding the law. Such was the debate in the Commons that followed a weekend’s worth of speculation about the nature of conversations in 2013 between then-justice minister MacKay and Beverley McLachlin, the Supreme Court’s Chief Justice.

McLachlin had flagged, for MacKay, a potential issue with the appointment of a judge from the Federal Court to Canada’s top court. The government would go on to nominate Marc Nadon, a Quebec judge on the Federal Court, to wear the red-and-white robes. The Supreme Court eventually ruled Nadon ineligible.

After that conversation came to light, the Prime Minister’s Office recalled its own version of events with respect to the McLachlin-MacKay exchange. Things got messy when reporters started to sort through claims and assemble timelines and assess intent. Mulcair called MacKay a “henchman” of the Prime Minister. MacKay claimed the government had acted on the dependable advice of sage advisers—including two former Supremes.

On a proposed prostitution law

When the Supreme Court forced the Tories to rethink Canada’s prostitution laws, sex-work advocates eagerly awaited the government’s legislative rewrite. They surely weren’t surprised when the government’s bill, C-36, left them wanting. Some said the new measures, which MacKay championed in the House of Commons in the spring of 2014, were unconstitutional and would endanger sex workers. That condemnation set the stage for typical drama in question period. Initially, however, NDP deputy leader Megan Leslie’s criticism was rather tempered.

“In less than 24 hours, the justice minister’s new bill already has legal experts predicting long court battles over whether or not it respects the charter, the Constitution, and the Bedford ruling of the Supreme Court of Canada,” she said on June 5. “Will the minister skip his divisive talking points? Will he do the sensible thing and refer this bill to the Supreme Court of Canada immediately?”

MacKay didn’t address the substance of the question, and the government never did refer the bill to the courts. The justice minister responded not with indignation, but with a simple hope that the opposition would join the government in its bid to fund new programs across the country “to see that we are able to help women, predominantly vulnerable women, who are in this profession through no fault of their own, to exit and find a better, safer, healthier life.” Louder arguments would follow on C-36, but that opening exchange exhibited the calmness of which the minister was capable on a tricky file.

On the fight against terror

MacKay could prove feisty, when called upon. On Feb. 19, four prime ministers, five retired Supreme Court judges, three former justice ministers, four past solicitors general, three ex-members of the Security Intelligence Review Committee, two recent privacy commissioners, and a long-time RCMP watchdog all criticized the government’s approach to Bill C-51 in a letter published by The Globe and Mail and La Presse. Earlier that day, one of those past solicitors general, Liberal MP Wayne Easter, confronted MacKay in the House.

Flabbergasted and in characteristic form, Easter lambasted MacKay for expanding the powers of security agencies without introducing parliamentary oversight, the likes of which other allies have enshrined in law. Easter recalled MacKay’s endorsement of “an all-party report calling for parliamentary oversight” tabled over a decade ago and ignored by subsequent Parliaments. “Whatever happened to the minister’s interest in balancing security and civil liberties with strong parliamentary oversight? Why is he not with us on that today?” he yelled.

MacKay returned fire. “Mr. Speaker, through the hyperventilation and rhetoric of the member, I heard a question that pertained to the oversight and work of SIRC,” he said. “Yes, indeed, there were recommendations that came from a Parliament over 10 years ago. If memory serves me right, there was a period of time, albeit a difficult time for the country, when the member himself was the solicitor general of Canada. If I am correct in saying so, he and his government rejected that recommendation for further parliamentary oversight, and so hypocrisy knows no bounds with the member opposite.” Much guffawing ensued on the Tory benches.

The Liberals had, in fact, tabled a bill in 2005 that would have established the National Security Committee of Parliamentarians. The bill died when the Liberal government fell, and no Conservative government reintroduced similar measures. MacKay’s analysis missed the mark, and his poor memory, for better or worse, is immortalized in Hansard.