How Stephen Harper forgot his own lessons

Paul Wells on what the former Prime Minister is leaving behind 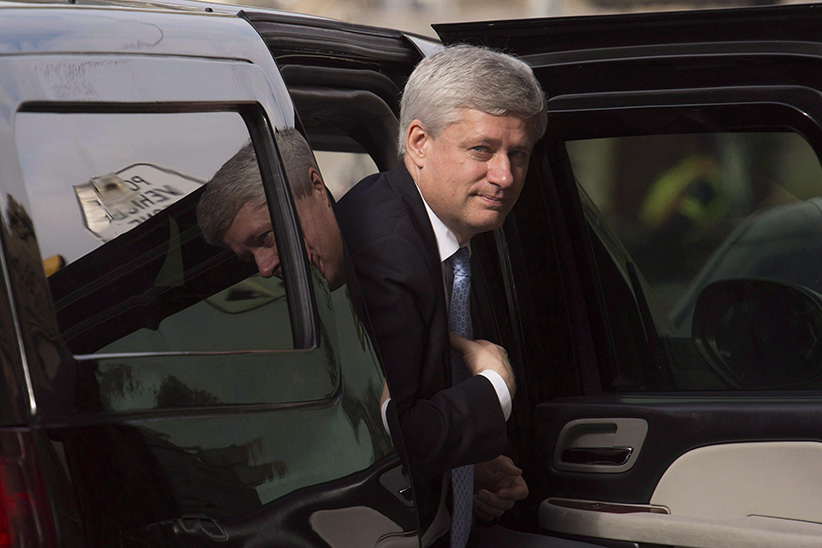 Then he or she—the bureaucrat, whom I cannot characterize as either senior or junior, for fear of identifying this public servant in any way—added: “Between you and me, he was great! Got his picture taken with everyone, gave a nice speech. I’m sure it’s been reported somewhere.” My source’s eyes darted left, then right. If my source had eyes. I can neither confirm nor deny.

In 13 years in Ottawa, Stephen Harper volunteered as a book sorter at the Rockcliffe Park charity book fair, built a new Conservative party from the ashes of two antagonistic legacy parties, ended Paul Martin’s career, and became Canada’s sixth-longest-serving prime minister. Finally lost an election, after winning three. On his last day in Ottawa, he was gracious and gregarious. The people who witnessed it aren’t sure they’re allowed to tell anyone. Old habits die hard.

When the Cheshire cat vanished, all that stayed behind was the grin. As Harper departs, all that remains, or seems to remain in the week of his departure, are the habits of secrecy and suspicion he refined to a desolate art. He resigned as Conservative leader without ever saying in public he would. Conservatives who have begun to speculate about the party’s future can expect to be chastised by others for daring to hold these conversations in public.

“Any views on why we fell short,” Guy Giorno, the Conservative national campaign chairman, said on Twitter, “I owe it to my Party to share with Party & National Council instead of the media and public.” And that’s fine; it’s a defensible position, but do you know who used to do pretty much the opposite? Stephen Harper. He built the modern Conservative party, in part, with a series of speeches he delivered and articles he wrote between 1999 and 2002, often for the National Post, in which he was not shy about describing the goals and methods Conservatives should follow if they wanted to govern. He has always been an introvert, but he understood that ideas must compete in the open air if they are to win.

At least, he did for a while. If my ﬁrst book about Harper, Right Side Up, has a thesis, it’s that he went from opposition to power by stifling some elements of his nature and by doing some things that didn’t come naturally at all. He compromised. He built bridges to unlikely allies: Quebec nationalists, old-line Atlantic Canadian Tories, Ontario pragmatists. I’m told he was still calling Joe Clark, trying to figure out ways they could work together under the aegis of the new Conservative party, as late as 2007. And who are we kidding? He never liked Joe Clark. But he knew he could not base power on suspicion and recrimination. At least, he did for a while.

Very early, he assigned one of Conservatism’s brightest talents, Jason Kenney, to work full-time visiting with immigrant communities, listening to their concerns, not merely winning the support of many new Canadians, but earning it. That support was crucial to the Conservatives’ 2011 majority victory.

Then, not long after, something broke. I hope one day to learn what it was. Harper simply got tired of explaining himself and meeting people who might not be entirely grateful for the face time. He gave an interview to CTV’s Lisa LaFlamme at the end of 2011, barely seven months after re-election, in which he said he was impatient to get big things accomplished. Something about that interview bugged him. Listening to it now, I honestly cannot tell what it might have been. Word went out that he would not sit for an interview with LaFlamme again. He no longer bothered to endure the presence of reporters at his home for annual summer receptions. His behaviour toward Kathleen Wynne, the elected premier of Ontario—whose voter coalition included a million Ontarians who had voted Conservative federally—was boorish. His behaviour toward Alberta’s Rachel Notley was no better. He complained the Canadian left wouldn’t accept his repeated election victories. Then he flatly refused to accept his elected opponents as legitimate.

His last re-election campaign was an inexplicable mess, but the seeds of defeat lay deeper. At the beginning of 2015, a staunch Harper loyalist in the Conservative party went door-knocking in a few ridings with campaigning candidates. At many doors, voters asked when Harper would go. It was the same question, whether the voters were antagonists, loyal Conservatives or undecided. When are you getting rid of Harper, they asked.

In Vancouver, after the election, I met journalists from Chinese-language Fairchild Television who said they grew tired of being summoned to Conservative campaign events where they would be handed “suggested questions,” photos and video for use on air. Global television stations were offered interviews with Harper on the condition they agree to the subject of the questions they would be permitted to ask. Global said no thanks.

Now some Conservatives argue they couldn’t win the debate over the role of government against Justin Trudeau’s promises of easy money. But when did they engage that debate in terms that rose above sloganeering? For a few years, Stephen Harper viewed political strategy as something more than an elaborate system for the prosecution of grudges. It didn’t last. In the end, he decided there was no need to listen and nothing to be gained from talking. I wonder who told him he’d lost.