How the Fathers of Confederation met their demise

Their deaths demonstrate the need to tend wounds, drink moderately and be kind to your employees 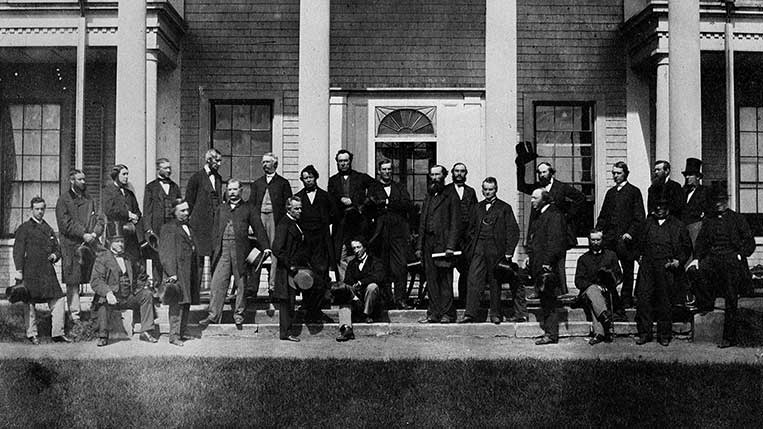 CHARLOTTETOWN, P.E.I.-September 11,1864- Constitutional Convention at Charlottetown, P.E.I., of Delegates from the Legislature of Canada, New Brunswick, Nova Scotia, and Prince Edward Island to take into consideration the Union of the British North American Colonies (G.P. Roberts/National Archives of Canada/CP)

In total, 36 men attended at least one of the constitutional conferences that gave birth to Confederation and the nation of Canada. Here’s a look at how some of them shuffled off this mortal coil.

Struck by throat cancer, a tracheotomy forced Galt to communicate in writing for the last months of his life.

The shortest-tenured prime minister in Canadian history was also the longest-lived of the Fathers of Confederation. Once the country’s finance minister while also High Commissioner to the United Kingdom, he retired to England after withdrawing from Canadian politics. He later died of heart failure.

Though he attended the Charlottetown conference as a delegate of New Brunswick, Gray spent his last years at the other end of Canada, as a Supreme Court of British Columbia judge. There, he led the Royal Commission on Chinese Immigration that proposed a head tax. He was struck by paralysis.

Cartier died in London while seeking treatment for what was then called Bright’s disease, an ailment of the kidney, seven years after attending the third and final Confederation conference in England in 1866.

The only Father of Confederation to be assassinated, McGee was killed while returning to his lodgings from a parliamentary debate that had run past midnight. The man hanged for his murder, Patrick J. Whelan, was a fellow Irish Catholic linked to the Fenian movement, which opposed British rule in Ireland and Canada.

Like many an inaugural national leader, Canada’s first prime minister died in office. Macdonald suffered a stroke just after securing a new mandate in the 1891 election. Earlier, following Confederation, he had survived a close brush with death, caused by pancreatitis. The ailment was likely a result of his copious drinking.

Though Gray chaired the iconic Confederation conference in Charlottetown as premier of Prince Edward Island, the death of his wife in 1864 caused him to withdraw from politics temporarily; the territory failed to join the new nation of Canada three years later. He eventually died 10 days after suffering a stroke.

Johnson was elected to the House of Commons just over a year before his death at the age of 50. His demise was attributed to “dropsy of the stomach,” a condition associated with liver cirrhosis, perhaps explained by the fact that Johnson was said to be guilty of “social excesses,” code for drinking and gambling.

In the first Canadian federal election in 1867, he was beaten for the seat by reverse namesake Archibald McLelan. He was later returned to Parliament by the voters of Colchester, in 1888. The victory came shortly before his death, which followed a period of poor health.

An accident forced McDougall to withdraw from public life a decade and a half before his death. Dismounting from a moving train in Cobourg, Ont., he seriously injured his spine. He died after a “long and trying” illness.

Brown succumbed to infection a few weeks after being shot in the leg by a sacked ex-employee of the Globe, his Toronto newspaper. It’s media lore that subsequent publishers passed down an office gun for years afterwards.

FILED UNDER: Canada 150 fathers of confederation